A look back at the Dutch royal year 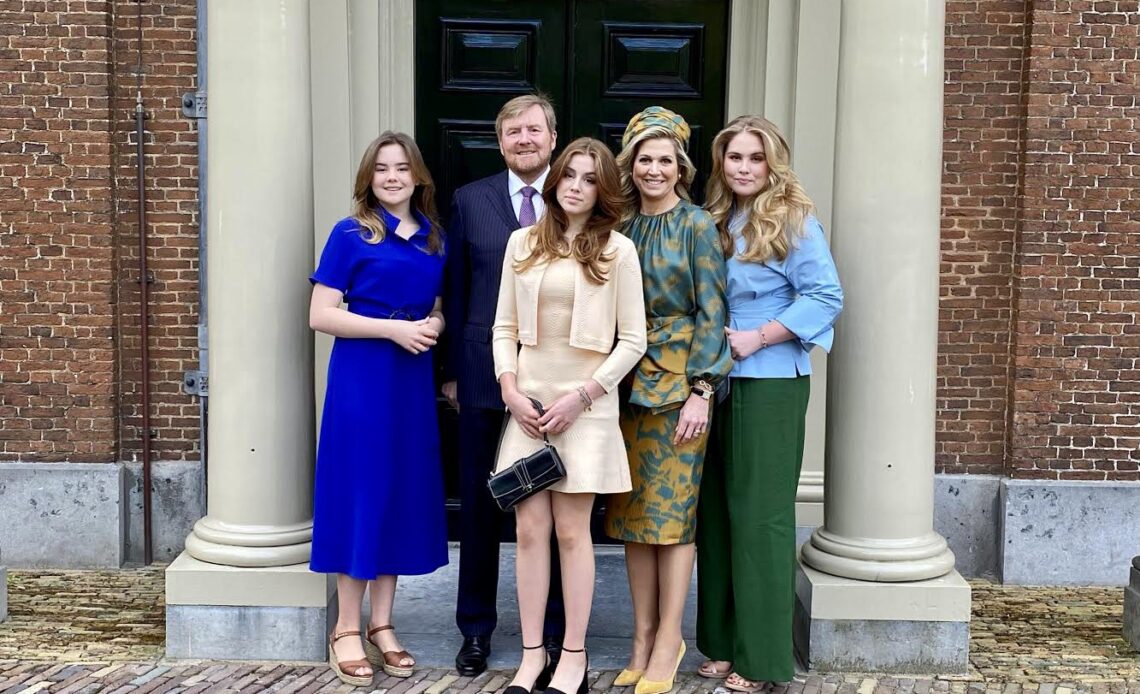 Our coverage of the Dutch Royal Family began with a look back at the wedding of Princess Margriet and Pieter van Vollenhoven, continued with the news that King Willem-Alexander would accept the Prime Minister’s resignation, and also included the report that Countess Eloise (daughter of Prince Constantijn and Princess Laurentien) was writing a book.

King Willem-Alexander and Queen Máxima sent a message of support following curfew riots; Queen Máxima spoke with non-food retailers about the pandemic, and a new portrait of Princess Beatrix was released for her 83rd birthday.

King Willem-Alexander and Queen Máxima celebrated their 19th wedding anniversary; we learned that the Dutch Royal Family would skip their annual skiing trip to Lech, Austria, due to the pandemic; we shared how the King once competed in a skating competition under a fake name, and Queen Máxima paid a visit to a Christian Primary School.

For the lovebirds out there, King Willem-Alexander re-enacted his proposal to Queen Máxima on the Dutch Royal Family’s Instagram account (other royal families take note!).

In March, the Dutch Royal Court announced that Princess Alexia would attend UWC Atlantic in Wales—Princess Leonor of Spain is in her class, and Princess Elisabeth, Duchess of Brabant, also attended the college.

Queen Máxima continued her work with inclusive financing by meeting with the President of South Africa; she also digitally visited a youth psychiatric centre; and received a book about menopause.

As part of a series on the future monarchs of Europe, we looked at the teenage heirs, including Princess Catharina-Amalia, Princess of Orange, who will one day be Queen of the Netherlands.

For International Women’s Day, Queen Máxima gave a speech to mark the day; she also paid a visit to the Elance Academy and the Nederlands Dans Theatre.

April began with a look at the grandchildren of Princess Beatrix—all eight of them—and a look at all of the best diamond tiaras available to the Dutch Royal Family.

Queen Máxima discussed how the coronavirus had affected our mental health, and King Willem-Alexander and Queen Máxima sent their condolences to the British Royal Family upon the death of Prince Philip, Duke of Edinburgh.

Further news about Countess Eloise’s lifestyle book, Learning by Doing, was announced; Queen Máxima visited a cleaning company in Uden, and April ended with the Dutch Royal Family heading to Eindhoven for a scaled-down King’s Day.

Speaking of King’s Day, King Willem-Alexander’s approval rating was still low (57% on King’s Day versus 76% approval in April 2020, plummeting to 47% approval in December 2020), heading into the celebrations.

King Willem-Alexander and Queen Máxima paid tribute to the war dead of the Second World War.

Ahead of her 50th birthday, we looked back at Queen Máxima’s life, including how her royal style developed; her childhood; how she became a sparkling consort for King Willem-Alexander; and how she reinvented the role of queen consort in the Netherlands.

The day before her birthday, the Dutch Royal Court released three new portraits. On 17 May, Queen Máxima received the Order of the House of Orange, received a special birthday cake, and sat for an interview at the palace.

On 19 May, Prince Constantijn and Princess Laurentien celebrated their 20th wedding anniversary—we did a rewind of their special day. We also covered the Dutch Royal Family getting into the Eurovision spirit; and learned that a television series about Queen Máxima’s early life was in development.

King Willem-Alexander paid a visit to a hospital providing aftercare to COVID-19 patients; Princess Amalia sat for her final exams (she graduated the next month), and Princess Mabel wrote an impassioned letter to UK Prime Minister Boris Johnson advocating for HIV/AIDS patients and treatment.

Queen Máxima began the month by handing out the ‘Apples of Orange’ (a delightfully named award from hers and King Willem-Alexander’s charitable foundation).

Princess Amalia graduated high school with distinction and announced that she would turn down her allowance—that she would be due to receive from her 18th birthday in December—until she becomes a full-time working royal.

We reported on the first Dutch State Visit announcement in over a year—King Willem-Alexander and Queen Máxima announced that they’d visit Germany in July. We also covered Queen Máxima’s visit to a buddy program for children of divorce; and reported on how Countess Eloise keeps her late uncle, Prince Friso, close to her heart.

For a family so closely associated with ‘orange’, this visit made perfect sense: King Willem-Alexander paid a visit to the ‘Most Beautiful Orange Street in the Netherlands’ ahead of Euro 2020, and Queen Máxima visited the UMC Utrecht to discuss healthcare.

Princess Beatrix was spotted in public for the first time since her ear surgery; we covered the German State Visit here, here and here; and reported on how King Willem-Alexander himself flew the aeroplane to Germany.

Queen Máxima decided to drive a truck barefoot during a visit to a women in transport visit (likely due to the fact that it’s uncomfortable and dangerous to drive in high heels).

Ahead of the Tokyo Olympics, the government announced that King Willem-Alexander, who, along with his immediate family, nearly always attend the Olympics to cheer on the Dutch team, would not be attending the Summer Olympics this year. King Willem-Alexander and Queen Máxima would tweet their support of Dutch Olympians instead.

A light month for the royals, but we continued to bring you coverage. We reported on the plane malfunction during a flight taken by Countess Eloise, and following the Olympics, how King Willem-Alexander and Queen Máxima invited Dutch Olympians to Noordeinde Palace.

We looked back on some of our favourite outfits worn by Queen Máxima during State Visits in 2018, and it was hard to choose, honestly!

Elsewhere, Prince Bernhard (son of Prince Margriet) made headlines for environmental issues and requesting freebies from artists; and King Willem-Alexander paid tribute to the late International Olympic Committee President Jacques Rogge, who passed away that month.

Princess Alexia closed the month of royal coverage by heading to Wales for school.

Queen Máxima visited a brewery in Limburg to learn more about the process and later gave a commencement address to students praising how they’ve handled life in the pandemic.

We also looked at some of the sapphire sparklers in the Dutch royal jewel vault and covered the Dutch royal reaction to a home win at the Grand Prix and a reception hosted for Dutch Paralympians at Noordeinde Palace.

King Willem-Alexander helped celebrate the 50th anniversary of Ahoy Rotterdam and later faced questions about opening up the Crown Estate.

Ahead of Prince’s Day, it was announced that there would be no balcony appearance due to the pandemic; Queen Máxima was spotted in a hand splint during a visit to a supercomputer, and King Willem-Alexander unveiled a monument to the Holocaust victims.

Meanwhile, Queen Máxima paid a visit to New York for the UN General Assembly, and later she and her husband enjoyed an evening of classical music for the 100th anniversary of the Nederlands Bach Society.

Ahead of her 18th birthday, it was announced that an official biography of Princess Amalia would be published to introduce her to the Dutch public.

This month, the Dutch Prime Minister confirmed that if Princess Amalia married a woman, she would be queen consort (other European monarchies followed suit).

We looked at what November held in store for State Visits and revealed the itinerary for the Dutch State Visit to Norway.

We looked at past Norwegian/Dutch State Visits to see what this friendship looks like and then began our coverage of the State Visit with King Willem-Alexander and Máxima’s arrival in Oslo.

Other State Visit coverage included Queen Máxima’s jewellery picks; a visit to Parliament; a focus on curbing cyberbullying; the Dutch royals toasting King Harald and Queen Sonja; and a visit to Trondheim as the State Visit concluded.

Unfortunately, Crown Princess Victoria was forced to cancel her visit to the Netherlands due to increasing COVID-19 cases; Princess Alexia joined a protest in Wales, and Princess Amalia shared her first tiara moment (and her general love of jewellery) in a snippet published from her biography.

In early December, a planned State Visit to Greece was postponed, and Princess Beatrix was diagnosed with coronavirus. We covered her son’s comments on her health and her eventual recovery from the illness.

On 7 December, Princess Amalia turned 18. New portraits of the future queen were released; we re-shared the biography we’d written about her, and Princess Amalia’s first standard was revealed. The next day, we covered her introduction to the Council of State.

Ahead of the holidays, Princess Alexia returned home from UWC Atlantic College in Wales and the Dutch Royal Court released a new family photo.

The Dutch Royal Family continued to court controversy over their pandemic management with revelations that a private party for Princess Amalia contravened public health restrictions. Speaking of Princess Amalia’s birthday—she was inundated with birthday cards.

In his Christmas speech to the Dutch public, King Willem-Alexander extolled the virtues of courage and perseverance; the Dutch government weighed in on royal involvement in government formation, and the Dutch royals sent their condolences following the death of Archbishop Desmond Tutu.

And finally, we looked at how the Dutch Royal Family celebrates Christmas.