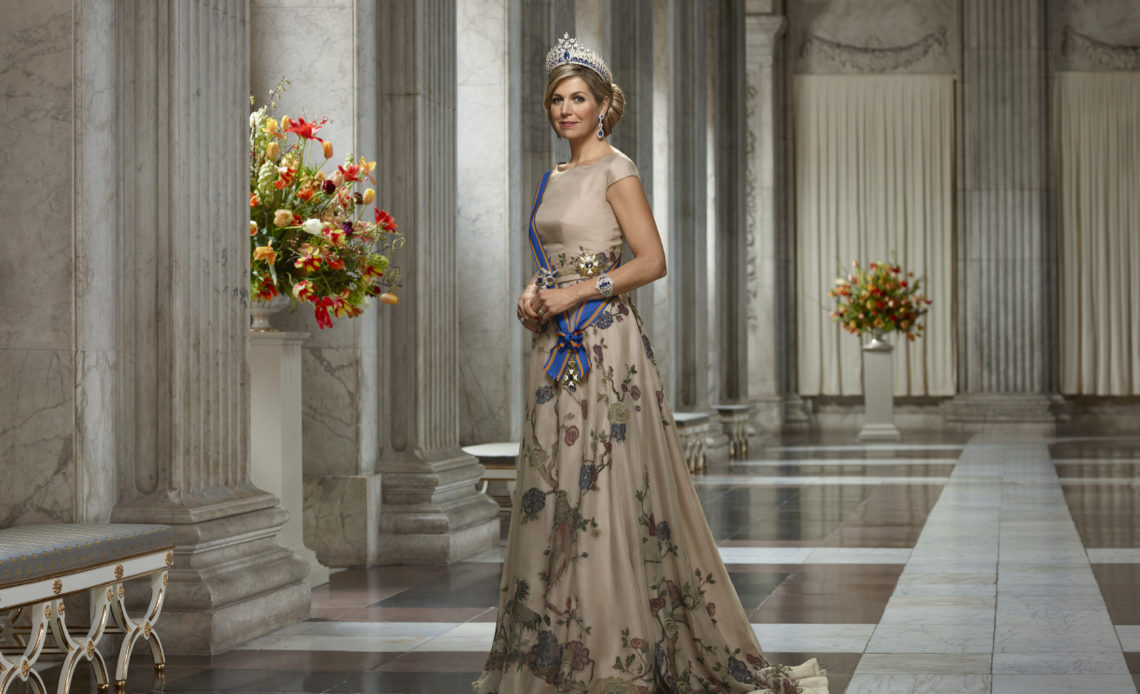 The Netherlands has one of the most spectacular collections of royal jewels in Europe, and this month we’re taking a look at five of their impressive diamond pieces.

When it comes to tiaras, go big or go home. Nothing shows this off better than the Stuart Tiara, with around 900 diamonds and 39.75 carats of them belonging to the massive Stuart Diamond alone. The tiara can be worn as a smaller piece by removing the top bits containing the Stuart Diamond (but why would you want to?).

This piece actually has a tie to the British monarchy, so it might seem like it was no surprise Queen Máxima wore the tiara on a recent state visit. In reality, no one had worn the piece in years. Queen Beatrix never wore the Stuart Tiara during her reign, although her mother, Queen Juliana was a big fan.

According to royal jewellery blog The Court Jeweller, its history dates back to Queen Mary II and King William III, who was the Prince of Orange when they purchased the enormous Stuart Diamond in 1690 and had it set in a brooch. A long history of back-and-forth between England and the Netherlands ensued and the diamond was turned into a pendant for a necklace, but in 1897, the Stuart Tiara was born when Queen Emma of the Netherlands commissioned the piece for the investiture of her daughter, Queen Wilhelmina.

Wilhelmina’s daughter, Queen Juliana, wore it frequently, but it wasn’t seen again until Máxima wore the toned-down version without the Stuart Diamond on a state visit to Luxembourg in spring 2018 (photo above). The full version was finally worn in all its glory at the October state visit to Great Britain.

Another piece with a connection to Queen Emma is this gorgeous tiara, which was commissioned by her husband King Willem III in 1890.

When you can wear a tiara in several different ways that always makes it more interesting to me, and this piece is a prime example. Queen Emma’s tiara can be worn as an all-diamond piece as shown by Máxima above, or the centre stone of each flower can be traded out for rubies, as Princess Laurentien wore the tiara to the wedding of Crown Princess Victoria and Prince Daniel below.

It also can be worn with stars attached at the top, but the all-diamond version is my personal favourite.

Although not quite as impressive in terms of height or intricate design, this bandeau packs some serious punch with the size of its 27 stones: the Dutch diamond bandeau sparkles with more than a hundred carats of diamonds.

According to The Court Jeweller, this piece actually used to be a necklace and was given to Queen Emma (then Princess Emma of Waldeck and Pyrmont) as a wedding gift in 1879. Her daughter, Queen Wilhelmina, re-fashioned the necklace into a headband-style tiara in 1937 and today, the bandeau is often seen on Queen Máxima and Princess Beatrix.

Both of these pieces are gorgeous on their own, but even more glittering together. Máxima chose this whopper of a necklace, along with the earrings and Dutch diamond bandeau, to wear to the very special banquet held the night before Queen Beatrix’s abdication. The necklace very much says future Queen, and I love the glamour of this piece with its enormous diamond pendant accent.

As for the diamond drop earrings, they were owned by Queen Juliana and Máxima frequently wears these to occasions such as state banquets. These are another versatile piece as the bottom stone can be swapped out with other gems to give the earrings a completely different look.