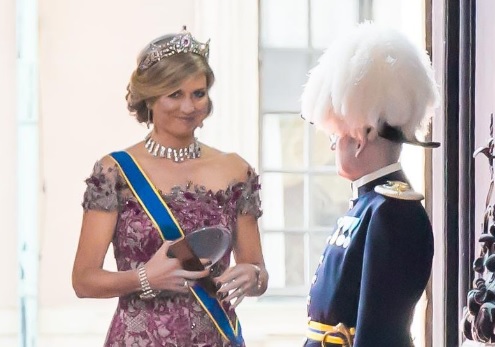 November promises a return to royal normalcy, with three state visits on the calendar for Denmark, the Netherlands, Norway, Spain, and Sweden.

The Danish Royal House notes that both countries “were able to celebrate the ‘Danish-German Cultural Year of Friendship,’ and during the state visit, agreements will be entered into within the creative educations and in the field of art and culture.”

Upon arrival, Queen Margrethe and Crown Prince Frederik will be received by the President and First Lady of Germany, then have lunch with the German Chancellor and visit a number of locations, including the Brandenburg Gate. On the first night, the German President will host a state banquet at the Schloss Bellevue.

The second day of their visit will include engagements that focus on “solutions within green energy, health, food and sustainable production,” according to the Danish Royal House, and the full agenda for Queen Margrethe’s visit to Munich has not yet been published, except to note that she will attend a banquet.

State Visit of the Netherlands to Norway: 9-11 November

From 9-11 November, King Willem-Alexander and Queen Máxima will pay a state visit to Norway, visiting Oslo and Trondheim.

Billed by the Dutch Royal House as “a confirmation of the good relations between the two countries, who share the same standards and values ​​and work together to find solutions to major international challenges. During the visit, bilateral and international cooperation, climate change, energy transition and sustainability are central.”

After meeting with King Harald and Queen Sonja on arrival in Norway, the royals will undertake a programme of engagements related to climate change, including the effects of climate change on the Arctic and the indigenous people of Norway.

That evening, King Harald will host a state banquet at the Royal Palace.

On 10 November, King Willem-Alexander and Queen Máxima will undertake engagements related to human rights, freedom of speech, and defence cooperation. They will meet with Prime Minister Jonas Gahr Støre.

Wednesday’s engagements end with a return reception hosted by the Dutch King and Queen at the MUNCH museum, with a performance by Dutch cellist Harriët Krijgh.

On the final day of the Dutch State Visit, engagements will be focused on “sustainable management of the oceans and the transition to sustainable energy sources,” the Dutch Royal House said.

King Willem-Alexander and Queen Máxima will have lunch with the Mayor of Trondheim at the Stiftsgǻrden before visiting the Trondheim University of Technology to take part in a panel discussion with Dutch and Norwegian companies about the North Sea and energy transition.

The final engagement of the state visit will take place at Norway’s historic Nidaros Cathedral, where Norwegian monarchs are inaugurated. Following a tour of the cathedral, the Dutch royals will listen to a choir performance by Sami singers.

The month ends with a historic state visit nearly 40 years in the making, when King Felipe and Queen Letizia undertake a State Visit to Sweden on 24-25 November.

A full schedule has not yet been released, but all engagements will take place in Stockholm, according to the Swedish Royal Court.

The Swedish Royal Court released a statement about the upcoming state visit, stating, “The purpose of the state visit is to further strengthen and promote the long-standing and very good relations between Sweden and Spain. The visit also aims to stimulate collaborations in the green recovery from the covid-19 pandemic, with a focus on innovative and sustainable solutions.”

The Swedish Royal Court noted that Spain is the country’s top tourist destination, and the Spanish language is the largest third language spoken by Swedish students.