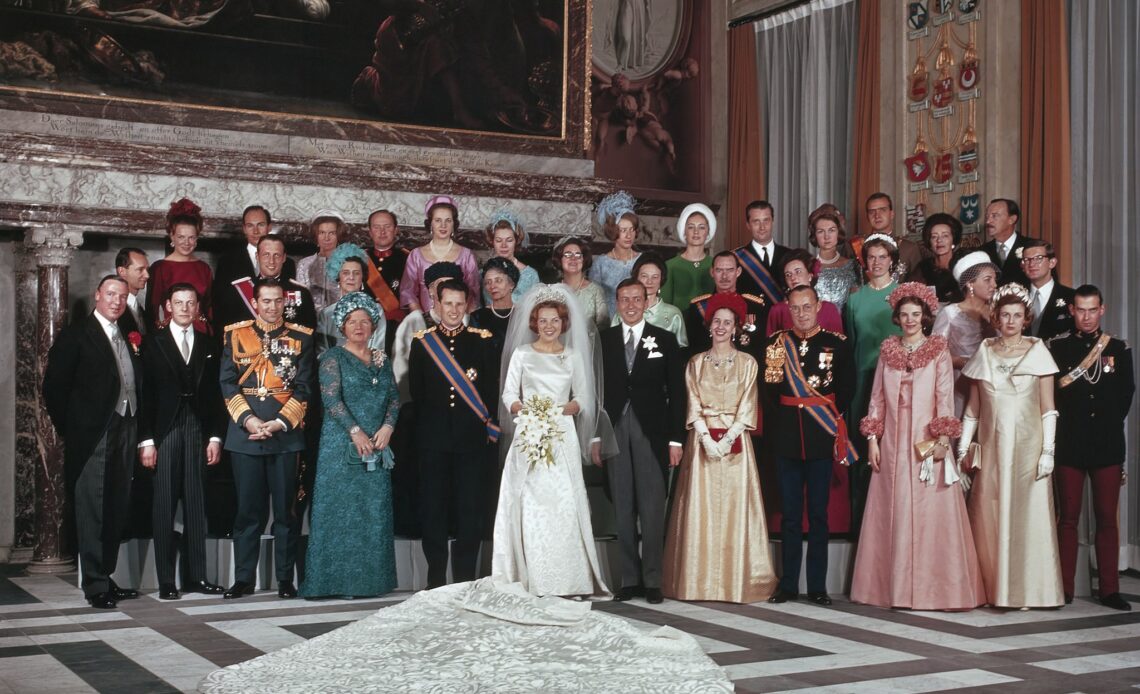 It was a wedding fit for a queen in waiting but the bride and groom only made it to the altar after a wave of protest, some of it angry, that threatened to stop their romance in its tracks. When Beatrix of the Netherlands, then heir to her country’s throne, wed Claus van Amsberg in 1966, the recent past proved more than problematic. The couple overcame those troubles and enjoyed a successful marriage. But the cloud of controversy hung heavy over the royal wedding of Beatrix of the Netherlands.

The princess who said ‘I do’ on March 10th 1966 in Amsterdam had always been determined. Born Beatrix Wilhelmna Armgard was born on January 31st 1938, the first of four daughters of Queen Juliana and Prince Bernhard. Her role as heir to the Dutch throne meant that interest in her choice of husband was intense. However, when she fell in love with German born Claus van Amsberg, dissent appeared quickly.

Claus, born in Hitzacker in Germany in 1926, was a controversial choice. Like many in his country of birth, he had served in the Hitler Youth and had later been conscripted into the German army during the last days of World War Two. Following the end of that conflict, he had studied law and had worked in the diplomatic corps. But the shadow of the past loomed large. Protests arose as soon as the relationship became public knowledge.

Queen Juliana discussed whether the marriage was the right step but ultimately gave her blessing and announced the engagement on June 28th 1965. To retain her succession rights, Beatrix needed parliamentary approval for the union which duly came despite a petition with over 65,000 signatures against the marriage. Popular discontent was visible and ongoing. In fact, questions arose as to whether the Dutch monarchy under Beatrix would survive.

That unhappiness was evident on the wedding day itself which saw protests on the streets of Amsterdam as the future queen made her way to her marriage. Beatrix and Claus were required by law to go through a civil ceremony first and that took place at Amsterdam Town Hall with the couple arriving by golden carriage. The marriage was conducted by the city’s mayor, Gijsbert van Hall.

From there, the princess and her groom made their way to the Westerkerk for their religious marriage. Royalty from across Europe packed the pews for the ceremony which was carried out by the Reverend Johannes Hendrik Sillevis Smitt.

The bride had chosen a gown by a Dutch couturier, already popular with her mother. Carolien Berge-Farwick of Maison Linette helped create a gown in white silk and duchess satin which featured a high neckline on its fitted bodice and three quarter length sleeves which allowed Beatrix to wear gloves for much of her chilly wedding day. A full length, bell-shaped skirt was embroidered with a scroll design and say beneath a second semi skirt which parted away from the waist to form the sixteen foot train that followed the bride up the aisle.

This Sixties’ bride chose a very Sixties veil, opting for a big bloom of tulle which finished at her waist. It was held in place by the ornate Wurttemberg Pearl Tiara which was worn by Beatrix’s grandmother, Queen Wilhelmina, at her accession. Her flowers included eucharis and lily of the valley, all in shades of white.

Following the ceremony, the newlyweds headed back through the streets of Amsterdam to the Royal Palace where their reception was held. Claus, now a Prince of the Netherlands, joined his wife on the balcony where they were greeted by crowds. Soon after their marriage, they released a statement acknowledging the losses many had suffered during World War Two and saying that knowing this had only strengthened their gratitude for the support they had received as they began their lives together.

Beatrix and Claus had three sons together. On April 30th 1980, Beatrix became Queen of the Netherlands on the abdication of her mother. Claus remained at her side until his death in 2002. Their eldest son became the country’s first king in over a century when Beatrix abdicated in his favour on April 30th 2013, presenting Willem-Alexander to his people in a balcony appearance before hundreds of thousands of people. The anger of a royal wedding in the same city, decades earlier, had evaporated into celebration for the reign of a queen whose marriage almost undid her destiny.