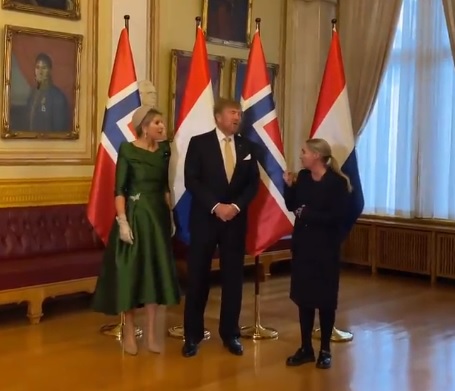 The Dutch state visit to Norway is in full swing. After being welcomed, on November 9th 2021, in a solemn ceremony, the King and Queen of the Netherlands were accompanied by their hosts, King Harald and Queen Sonja, on a visit to one of Norway’s most famous museums.

King Willem-Alexander and Queen Máxima were accompanied to the Polar Museum on Bygdøy in Oslo by King Harald and Queen Sonja. Norway and the Netherlands have strong historical ties to each other and to the Arctic, the sea and land areas around the North Pole. The Fram Museum tells the story of the Norwegian polar expeditions and Norwegian polar research.The ship, “Fram”, is the main attraction and was used on three expeditions in the Arctic and Antarctic under Fridtjof Nansen, Otto Sverdrup, and Roald Amundsen in the late 1800s and early 1900s.

Willem Barentsz was a Dutch explorer who discovered the now Norwegian island of Svalbard in 1596. He participated in three expeditions from the Netherlands to find a north-eastern passage from Europe to East Asia. Barentsburg, the Barents Sea, the Barents Island and the Barents region are named after him.

King Harald and Queen Sonja, together with their Dutch guests, heard eight young voices share their perspectives on development and on the future prospects in the High North. Astrid Regine Nässlander from Engeløya and Michal Meyer Nilssen from Bodø both have a commitment to sustainable production, she as a kitchen manager and he as an entrepreneur who has started a fish skin company. Ole Martin Melbøe Nygaard from Harstad, leader of the Youth County Council in Troms and Finnmark, and geography student Anja Márja Nystø Keskitalo from Trondheim also participated from Norway. She is writing a master’s dissertation on Sami reindeer husbandry areas and is a former member of the Sami youth organization Noereh and the Arctic Frontiers Student Forum.

Representatives of the Arctic Frontiers, which annually organizes a conference on issues and opportunities in the Arctic, moderated the subsequent roundtable discussion between the participants. Climate change is particularly visible in the Arctic, not least the distribution of sea ice in summer. Norway and the Netherlands have engaged in polar research, and both countries have recently published a strategy for the Arctic that emphasizes the need for international cooperation and research, the involvement of young people and joint measures to curb climate change.

The afternoon of the first day of this long awaited State Visit also saw King Willem-Alexander and Queen Maxima visit the Norwegian Parliament. The representatives of parliament received the King and Queen of the Netherlands for a courtesy visit to the Storting. The Dutch royals got to see the building and talk to the parliamentary president, the Norwegian prime minister and Norway’s most prominent politicians.