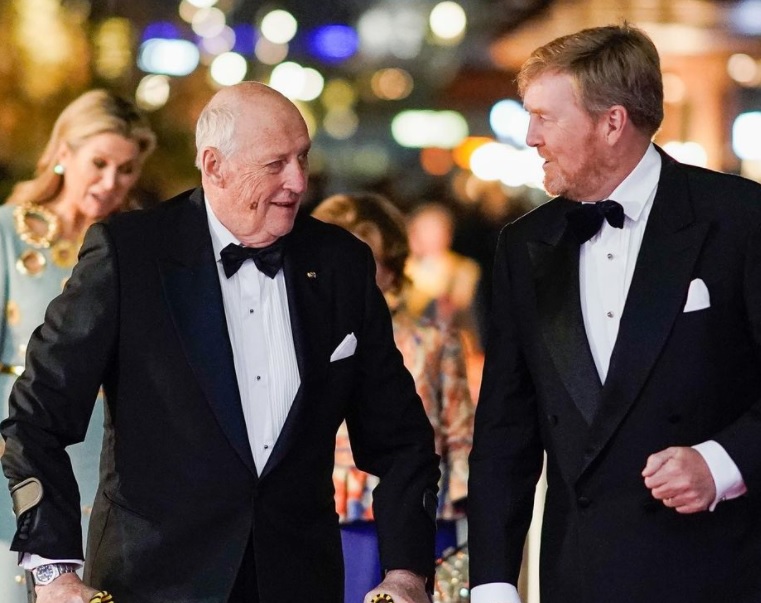 The second day of King Willem-Alexander and Queen Máxima’s State Visit to Norway ended with a ‘return reception’ – a tradition that is slowly disappearing, which made it all the more special to see it in action.

King Willem-Alexander and Queen Máxima hosted the Norwegian Royals at a concert, followed by a standing reception, to thank them for their hospitality during their visit.

The evening event was attended by The Dutch Royal couple, as well as King Harald and Queen Sonja of Norway. it was held at the MUNCH Museum in Oslo.

The concert, held in the museum’s Fest Hall, was played by Dutch cellist Harriet Krijgh, one of the most promising voices of classical music in the current panorama.

Following the concert, a standing reception was held for all the attendants to the concert; during the reception, it seems that the Dutch King and Queen took the opportunity to receive a tour of the museum.

The MUNCH Museum is a newly-built construction in the Bjørvika area of the Norwegian capital. It was inaugurated on the 22nd of October 2021 by King Harald.

The architect behind the project is Spanish-born Juan Herreros, and his design was widely criticised as the unofficial world’s largest collection of guardrails. Nevertheless, the last exhibition at the previous site of the museum ended on the 1st of October, and the museum staff went to work to transport the artefacts in their new home. The collection includes over 1200 paintings, 18000 prints, 500 plates and 2240 books, as well as various other items that the famous Norwegian painter donated to the Municipality of Oslo, items that his sister donated to the museum and items acquired through trading with private collectors and other museums.