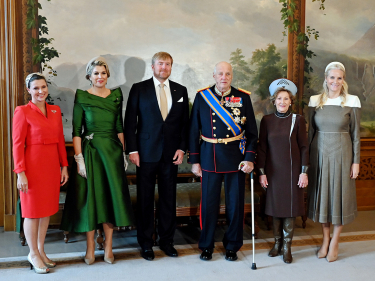 Following almost two years of restrictions and shutdowns, life is beginning to go back to how it was before, albeit with some remanence of the trauma we collectively lived through.

State visits are starting to reappear on heads of states’ calendars, and on 9 November, the Dutch state visit to Norway began.

Once they got off the plane, Their Majesties were welcomed by many authorities, including the Dutch Ambassador to Norway, John Groffen.

The Dutch King and Queen then made their way towards the Royal Palace, where King Harald, Queen Sonja, Crown Princess Mette-Marit and Princess Märtha Louise were waiting for them. Crown Prince Haakon was scheduled to attend but had to pull out because of a cold.

In the court of the Royal Palace, the official welcome ceremony took place under a drizzling rain, which didn’t stop the public from gathering there to welcome Their Majesties. The public included a group of children from a Dutch school in Oslo.

King Willem-Alexander inspected the guard of honour assembled for the ceremony while the rest of the royals stayed behind to watch.

Once back inside the Palace, the two royal couples exchanged the usual gifts, traditional to all state visits; the Dutch royals gifted the Norwegian King and Queen two glass bowls created by artist Geir Nustad, and they brought a clock for Princess Märtha Louise.

Following the end of the official welcome, His Majesty King Willem-Alexander laid a wreath at the Norwegian War Memorial, a gesture that is typical of the openings of state visits to symbolise the two countries’ commitment to peace and the commemoration of the many who gave their lives for their nation.

Before the end of the morning, King Willem-Alexander and Queen Máxima also paid a courtesy visit to the Storting, the Norwegian Parliament, and entertained a brief meeting with the President of the Parliament, Eva Kristin Hansen, before signing the guest book and posing for a photo opportunity.

The visit is expected to continue until Thursday and will include a meeting with Norwegian Prime Minister Jonas Gahr Støre and a trip to Trondheim on the last day.