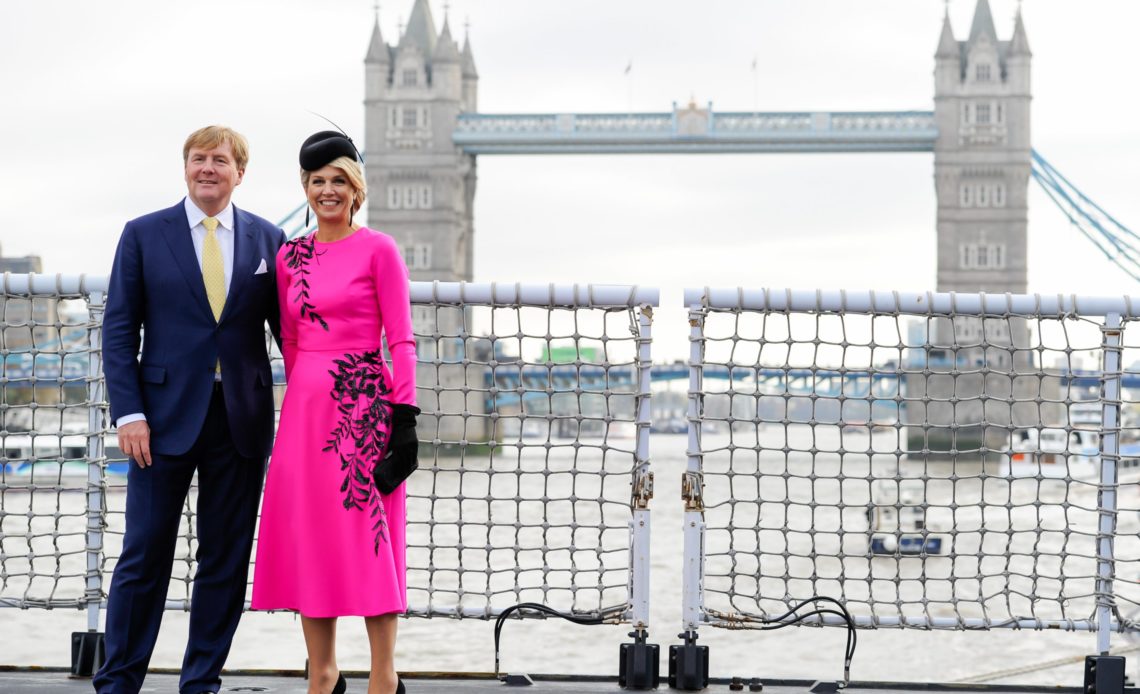 Taking place from 23-24 October 2018, the state visit of King Willem-Alexander and Queen Máxima to the United Kingdom treated royal watchers to some wonderful photo ops, including an especially epic tiara moment.

Following their trip, the royal couple posted on Twitter: “Many thanks to Queen Elizabeth and her family for the warm welcome we received. The ties between our kingdoms have always been close and will remain so, both now and in the future. It’s been a wonderful state visit! – WA and Máxima”

Our team is taking a look at their favourite looks from this special tour, along with her state visit to Luxembourg that same year.

This was a short tour, but a really fun one in terms of fashion. I always love seeing what Máxima will come up with, and she didn’t disappoint during her stay in London.

The blush skirt suit she wore for their official welcome to the UK by The Queen was such an elegant look. The outfit, by designer Claes Iversen, gave off a ladylike vintage vibe (it felt very Chanel to me with the fringe), and it worked especially well with her wide headband in a matching fabric. I’m always a big fan of brooches, and Máxima wowed with one of her favourites, featuring diamonds and pink stones believed to be kunzite.

I couldn’t let a tiara moment pass by without a mention, and Máxima brought out a whopper for the state banquet held at Buckingham Palace: the Stuart Tiara. Her blue ombre gown with a sheer cape-style overlay was certainly stunning, but the diamonds stole the show, especially since this was the first time we’d ever seen her wear the piece in its full glory.

It was a fitting choice for their UK visit, as the 39.75 carat Stuart Diamond originally belonged to England’s William III and Mary II and eventually made its way to the Netherlands. Although she’d worn the smaller, modified version of the tiara without the Stuart Diamond on a previous royal visit to Luxembourg, royal watchers were thrilled to see Queen Máxima bring out the complete piece. It really takes a certain personality to be able to pull this look off without it feeling overwhelming, and Máxima carried it with aplomb.

For our delve into Queen Máxima’s State Visit style for 2018, I’ve opted for two looks from her time in Luxembourg in May that year. Let’s start at the very beginning, with the sunshine yellow dress she chose for her arrival.

The design, in silk, is by one of her favourite fashion houses, Natan. It’s a masterpiece of simplicity with a very Máxima touch, that huge floral decoration on one shoulder. The three-quarter sleeves also let her add another touch of her own – Máxima chose crochet gloves in a matching shade to go with this bright outfit. The hat is by Fabienne Delvigne and adds to the striking outline. This, for me, is an elegant example of that old royal adage – dress to make sure everyone can see you.

My second pick is an all-time Máxima favourite, the red Valentino cape dress.

Máxima has worn this several times, and it got another outing at a concert hosted by the King and Queen of the Netherlands to say thank you to their hosts for their hospitality. There is nothing not to love about this gown which suits Máxima to a tee. The bold colour, the soft yet dramatic shaping and the flow all work to perfection.

I’m piggybacking on Lydia’s coverage of Máxima’s wardrobe in Luxembourg. This stunning canary yellow gown is sublime, and so Máxima! One thing you can never accuse Máxima of is sporting boring clothes. She’s always willing to play with colour, patterns and wear the most dramatic creations. This one-shouldered gown immediately draws attention to her, especially surrounded by more sedate fashion from Grand Duchess Maria Teresa and Hereditary Grand Duchess Stephanie. It’s so perfectly, Máxima.

And now I’m piggybacking on Kristin because it cannot be overstated how magnificent Queen Máxima looked at the State Banquet during her visit to the United Kingdom. This may be my favourite Máxima fashion moment ever!

When the King and Queen undertook their 2018 state visit to the United Kingdom, one of the most stunning looks Máxima wore was the bright pink coat dress by Oscar de la Renta on the Thames in London with the Earl and Countess of Wessex and Duke of Kent. The bright pink dress was decorated with black flowers, and she wore a matching black hat and shoes. The Queen can pull off almost any look, but something about the bright pink really made her shine that day. She had also worn the outfit earlier in the day when she visited the UK-Netherlands Innovation Showcase alongside the Earl of Wessex.

Máxima is one that mixes her outfits up; she doesn’t always wear coat dresses, dress pants or skirts. She finds the right balance of wearing all three styles at different events. I really loved her look at Belval and Castle Vianden on their state visit to Luxembourg. She wore a stunning neutral blouse and pants. It also featured a more metallic jacket that matched perfectly.