A Look Back at the Cambridge Royal Year 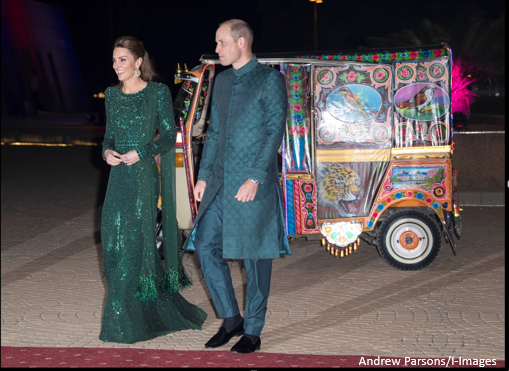 As we do each year, we are taking a look back at the Cambridges’ royal year from charity visits, official visits and more. Here is a highlight review of their year, and the stories we covered.

The Cambridges’ royal year began with a big announcement for Kate: she would be designing a series of Back to Nature gardens with the Royal Horticultural Society in the spring and summer to highlight the benefits of the natural world and outdoors time to childhood development and mental health. She later visited King Henry’s Walk Garden in Islington.

Meanwhile, William flew over London during a visit to the London Air Ambulance Charity at the Royal London Hospital. He also became the patron of the Charity’s 30th-anniversary appeal.

Kate also visited the Royal Opera House and announced that she was going to be learning more about textiles in the coming months. During a visit to Family Action later that month, she also revealed her own struggles with motherhood as she helped launch the new FamilyLine helpline for families.

“It’s so hard. You get a lot of support with the baby years,” Kate told a volunteer, “particularly in the early days up to the age of about one, but after that, there isn’t a huge amount – lots of books to read.”

The Duke travelled to the World Economic Forum in Davos, Switzerland and met with world leaders and prominent businesspeople, including former US Vice President Al Gore, and also moderated a panel on mental health, where he revealed that he still struggles to discuss his mental health as it pertained to his career as an air ambulance pilot.

At the end of the month, it was announced that Princess Charlotte would begin school in the fall at Thomas’s Battersea alongside her older brother, Prince George. William and Kate visited Dundee, Scotland, to open the new Victoria & Albert Museum there. Kensington Palace commented on the toxicity of online trolls relating to Kate and Meghan, speaking exclusively to Hello!, and William lent his support to an environmental campaign to stop littering.

Kate visited two primary schools in support of Children’s Mental Health Week, Lavender Primary School and Alperton Community School, where she revealed that her family makes her the happiest.

William and Kate attended the BAFTAs on 10 February. A few days later, the Duchess attended a Mental Health in Education conference while the Duke visited The Passage, a homelessness charity his mother supported, and a charity that he became patron of in 2019.

Kate attended the 100 Women in Finance Gala, which was held in support of her Mentally Healthy Schools Initiative; William attended several engagements in support of men’s mental health.

In mid-February, there were reports that the Cambridges and Sussexes would split their households in 2019. This news wouldn’t be confirmed until later in the spring.

The Duchess of Cambridge wrote a letter in support of Nursing Now 2020; the couple then made an unannounced visit to Northern Ireland for two days of engagements. There, Kate revealed to a schoolgirl writing a biography about her for an English project her favourite parts about being a princess.

William and Kate began the month by attending an event at Buckingham Palace to mark the 50th anniversary of The Prince of Wales’s investiture. They carried out a day of engagements in Blackpool, and Kate attended the 2019 Portrait Gala at the National Portrait Gallery.

They joined the rest of the Royal Family at Westminster Abbey for a Commonwealth Day Service and presented shamrocks to the 1st Battalion Irish Guards for the St Patrick’s Day Parade at Cavalry Barracks, Hounslow.

Kate made a rare appearance with The Queen, officially opening Bush House at King’s College, London on 19 March. She also visited the Foundling Museum in London and announced that she had become the Museum’s new patron.

The Duchess spoke about parental bonding during a visit to the Henry Fawcett’s Children Centre in Lambeth, and the Cambridges hired Christian Jones to become their new Communications Secretary.

In late March, Her Royal Highness visited the Scouts Headquarters in Essex to celebrate Gilwell Park’s 100th anniversary. Kensington Palace announced that William would visit New Zealand on behalf of The Queen in the aftermath of a terrorist attack at a mosque.

In early April, it was announced that the Duke of Cambridge had completed a three-week attachment with MI5, MI6, and GCHQ – British Intelligence Services. New photos were released for Prince Louis’s first birthday.

William visited New Zealand at the end of the month, and most of his engagements were private. He attended an ANZAC Day service in Auckland and met with survivors of the terrorist attack in hospital. He also visited mosques in Christchurch. Back in London, Kate attended the ANZAC Day Service at Westminster Abbey with The Duke of Sussex and The Duke of Gloucester.

On her eighth wedding anniversary, the Duchess of Cambridge was awarded the Dame Grand Cross of the Royal Victorian Order by The Queen for services to the monarch.

Kate opened the Kantor Centre of Excellence in London; new photos for Princess Charlotte’s fourth birthday were released, and William was heckled as he attended a service at Westminster Abbey marking the 50th anniversary of the UK’s nuclear deterrent programme.

In early May, the Cambridges announced that they would host the inaugural King’s Cup Regatta in the summer in support of eight of their patronages and launched the event at Cutty Sark in London.

William and Kate visited Wales for a series of engagements; then launched Shout, a mental health helpline, with Harry and Meghan.

Prince William announced that he was partnering with footballers to discuss men’s mental health for a BBC special; participated in #MentalHealthMinute, and attended the first United for Wildlife joint taskforce. He also launched Heads Up, a mental health initiative with the Football Association and Heads Together.

Kate visited Bletchley Park in honour of the 75th anniversary of D-Day; then visited her Back to Nature Garden at the RHS Chelsea Flower Show ahead of its opening with William and her children.

William attended the FA Cup Final at Wembley; Kate opened her Back to Nature Garden and gave a personal tour to The Queen when she visited.

William also lent his support to a drowning prevention campaign for the Thames while Kate came up with outdoor activities in support of her Back to Nature Garden.

The Cambridges took part in the State Visit from the United States, attending an official dinner at Buckingham Palace.

William attended a Child Bereavement UK dinner in support of its 25th anniversary; the couple visited Cumbria for a series of engagements; Kate appeared on Blue Peter, the CBBC programme, to talk about outdoors and nature; she attended the Action on Addiction gala dinner for Addiction Awareness Week; and then the Duchess wrote a message in support of Children’s Hospices Week.

Their Royal Highnesses attended Garter Day celebrations alongside members of the Royal Family, as well as King Felipe and Queen Letizia of Spain and King Willem-Alexander and Queen Máxima of the Netherlands. The next day, they attended Royal Ascot.

In late June, Kate became patron of the Royal Photographic Society, taking over from The Queen; while William said it would be fine with him and Catherine if any of their children were LGBTQ. At the end of the month, Kensington Palace announced that William and Kate would make an official visit to Pakistan in the fall.

It was a quiet July for the Cambridges, save for the staple on Kate’s calendar: Wimbledon. She attended several matches, including the men’s finals with William and the ladies’ finals with Meghan and her sister Pippa. For the first time, Kate presented the Wimbledon trophy to Novak Djokovic.

For his sixth birthday, new photos of Prince George were released.

August was another quiet month for the Cambridges. The King’s Cup Regatta had to be rescheduled for earlier in the week due to poor weather on the Isle of Wight. Things didn’t go so smoothly for Kate, but Prince George and Princess Charlotte were there to cheer on their parents, and William ended up winning the first King’s Cup.

William announced that he was working on a football season-long documentary about men’s mental health with the BBC.

September began with William and Kate taking Princess Charlotte to her first day at Thomas’ School in Battersea.

William visited Hendon FC and Devon to talk about mental health; Kate opened a permanent Back to Nature Garden at RHS Wisley in Surrey. William received a pair of pyjamas worn in Killing Eve when he opened a BAFTA exhibition; Kate made a surprise appearance at the Sunshine House Children and Young People’s Health and Development Centre.

The Duchess of Cambridge appeared again on CBBC’s Blue Peter programme to name the winner of her Back to Nature contest; William and Kate attended the naming of the RRS Sir David Attenborough (previously named Boaty McBoatface).

Ahead of their official visit to Pakistan, William and Kate visited the Aga Khan Centre in London for a reception and to meet Pakistani people living in London.

William opened a new facility at Oxford; the family attended an Aston Villa match (where Prince George got a little rowdy when his team won); William and Kate voiced a PSA in support of mental health alongside Harry and Meghan, and Kate visited the Natural History Museum.

Back in the UK, William and Kate hosted the BBC Radio 1 Teen Hero finalists at Kensington Palace.

The Duke and Duchess attended the launch of the National Emergencies Trust in London; then William attended the London Air Ambulance Charity Gala.

It was the Cambridges’ turn to attend the Royal Variety Performance (because Prince Charles and Camilla were away on tour). They also attended the Festival of Remembrance and Remembrance Sunday events.

Kate became patron of Family Action, taking over from The Queen, and visited children to take part in Christmas activities.

William and Kate appeared in A Berry Royal Christmas, a BBC production starring national treasure Mary Berry and featuring the duo with their various patronages as they honoured those who work over the holiday period.

Prince George and Princess Charlotte joined their parents for the first time at Sandringham on Christmas morning; and Prince George appeared in The Queen’s Christmas message as he helped his father, grandfather, and great-grandmother launch an appeal with the Royal British Legion.

Kate also penned an open letter in support of nurses and midwives ahead of the WHO’s International Year of Nurses and Midwives.