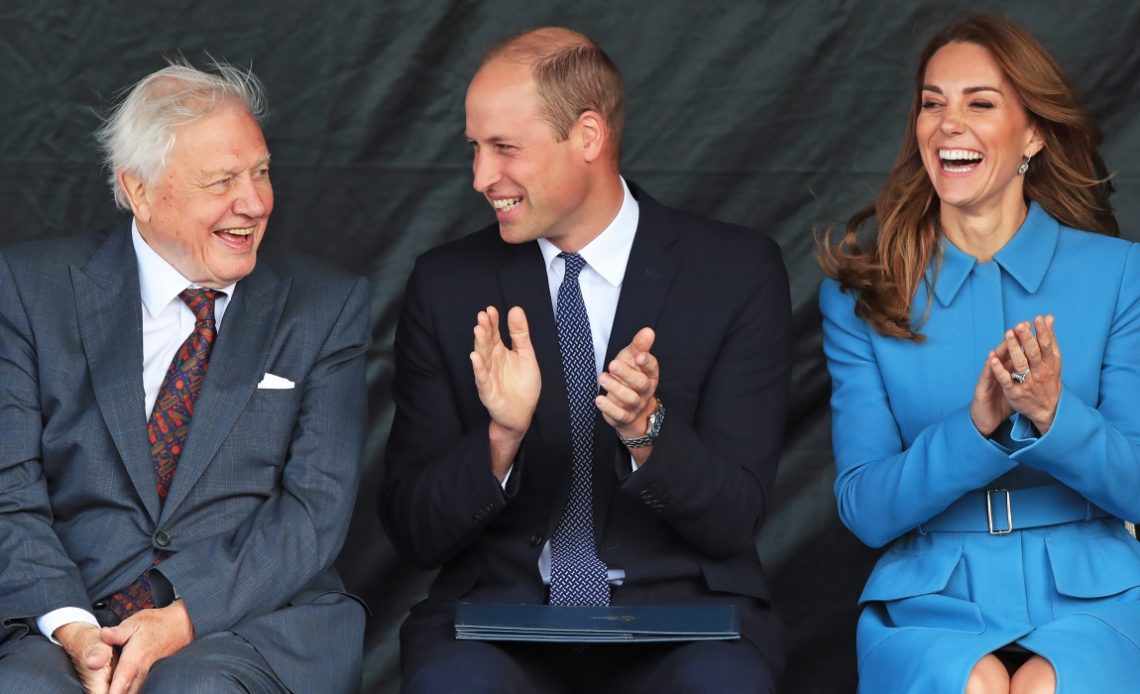 The Duke and Duchess of Cambridge attended the naming ceremony for the newly-minted RRS Sir David Attenborough this afternoon in Birkenhead, joining the British conservationist legend for the service.

In a surprisingly humorous speech, William teased the British legend, saying that “We are of course here to celebrate a true British marvel.

“One that is strong, sturdy, and incredibly well-engineered that deepens our understanding of the impact our behaviour has on the world around us and arms us with the facts to do something about it, an icon capable of feats not seen before and potentially never seen again. And no – I’m not talking about you, David. Those words wouldn’t do you and your lifetime’s work justice!”

The RRS Sir David Attenborough, formerly named Boaty McBoatface (as voted on by the British public), will become a new polar ship that will help researchers learn more about how the Earth functions and can function as a sustainable planet.

The polar ship will “help to expand global knowledge of the polar oceans, and the impact of climate change on this crucial region,” according to the Duke.

William then asked Attenborough to speak, humorously referred to the polar ship’s former name, “It is my immense privilege and relief to welcome Sir David Attenborough, rather than Boaty McBoatface, to speak.”

Attenborough then spoke, talking about how the polar ship will help to solve great problems.

“That’s what this astonishing ship will be here to do, to find out the facts and find the science with which to deal with problems that are facing the world today and will increasingly do so tomorrow. There could be no more important function for any ship, anywhere in the world, than those which are going to be dealt with by this remarkable ship, at the cutting edge of science.”

Attenborough also said that he considers the ship’s name as the “greatest possible honour.”

She gave a brief statement, “It gives me great pleasure to name this ship Sir David Attenborough and may God bless her and all who sail in her,” and then pressed a button that released a bottle of champagne to smash against the ship.

The RRS Sir David Attenborough is operated by the British Antarctic Survey and was commissioned by the Natural Environment Research Council.

Learning about the ship’s navigation systems and ice-breaking capabilities on the bridge.

The ship’s specially strengthened hull will be able to break through ice up to 1m thick. pic.twitter.com/Q6rZaDsM0J

During their visit, the Duke and Duchess of Cambridge and Attenborough met with the ship’s scientists for a demonstration on the equipment the team will use to do their research at sea. They will use the ship for the next 25 to 30 years in the Antarctic and Arctic. They also met the captain and crew to learn about the ship’s navigational and ice-breaking capabilities.

The trio also met with youngsters who take part in the British Antarctic Survey’s Polar Explorer Programme, which engages young people in STEM to learn about polar science. They were also treated to a penguin parade by local schoolchildren who have been learning about the Antarctic and climate change.

And if you’re worried about Boaty McBoatface being no more, worry not: a small, unmanned yellow submarine aboard the ship retains the name so as to not forget the 124,000 people who voted – in a public poll – to make that the ship’s name.