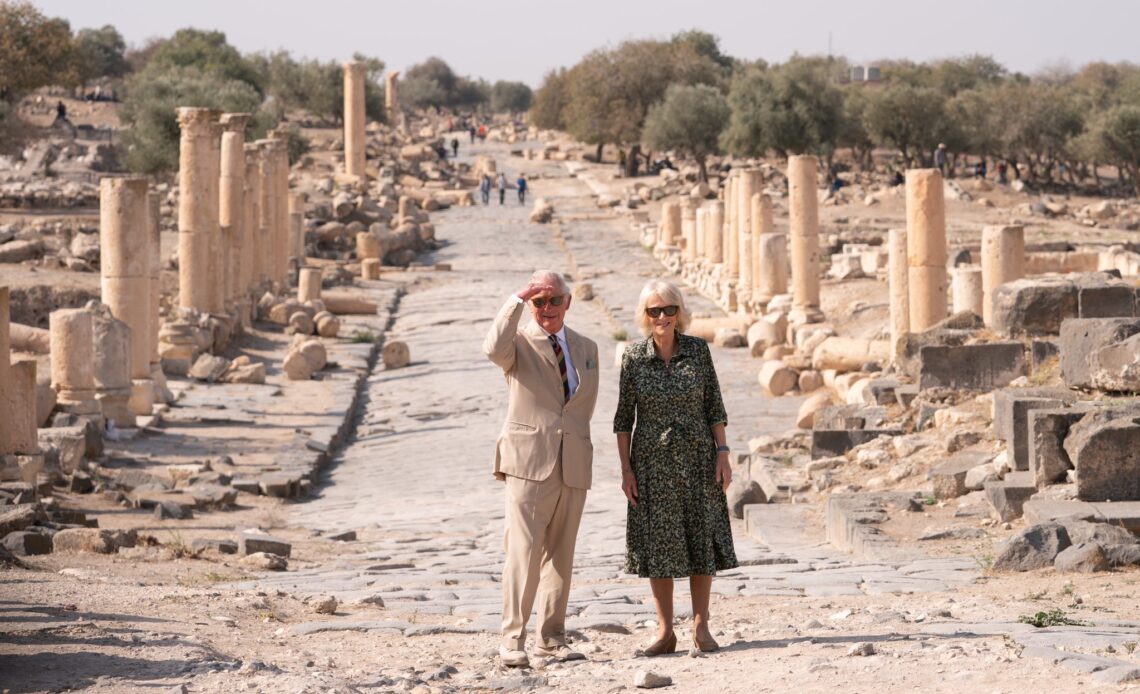 The Prince of Wales and the Duchess of Cornwall have continued their royal visit to Jordan.

The couple began the second day of their stay with a walking tour of Umm Qais accompanied by Princess Dana Firas, a global advocate for heritage protection and preservation, and learned about the many historical influences on the area.

Prince Charles planted a tree during their walking tour as a symbol of UK and Jordanian relations and to celebrate the centenary of the Hashemite Kingdom of Jordan. The royals saw first-hand the work done by the Turquoise Museum and the Newton-Khalidi Fund, the former of which was created by Prince Charles in 2006 to support the revival of historic areas and traditional craftsmanship.

Prince Charles spoke with reporters about his mother’s health, noting that The Queen is alright, and that, “Once you get to 95, you know, it’s not quite as easy as it used to be. It’s bad enough at 73.”

Next, Prince Charles paid a visit to the International Rescue Centre at the Al Nuzha Community Centre. During the visit, Prince Charles met with children learning in the computer lab and families who make use of the facilities. He also met with refugee families supported by the International Rescue Centre to learn more about the aid they’ve received from the organisation.

During his visit, Prince Charles chatted with a Jordanian beekeeper named Hudaifa and extolled about the local honey he’d been gifted. “I’m thrilled with the honey. I’d like to send back one of mine. We’ll attempt it! Whether it reaches you…”

After speaking with volunteers at the Centre, Prince Charles said, “You are marvellous for volunteering. Fantastic. I’m so impressed by how you are managing these challenges.”

Camilla, meanwhile, paid a visit to the Princess Taghreed Secondary Girls School in Anman. During her visit, Camilla participated in an Arabic literacy class, and met with teenage girls taking a vocational class and spoke with them about the impact of the pandemic on their education and their futures.

Next, Camilla attended a Women of the World event at the Manara Arts and Culture Café where she gave a speech praising the women present. She said: “I’d just like to say, I heard a quote – some wise words – from Queen Rania that are particularly apt for this occasion.  Her Majesty once said, ‘When a woman succeeds, she reaches out to those around her and pulls them up with her. That is why if you empower a woman, you empower a whole society.’

“The collective experience of the women in this room proves the truth of these words.  I very much hope that this afternoon might be the first step for all of you and for WOW to do some serious reaching out and pulling up across our two countries- and that we will have many more opportunities to share our beliefs, celebrate each other’s achievements and inspire one another to carry on…”

Prince Charles then paid a visit to the Royal Scientific Society, where he met with Princess Sumaya bint El Hassan, who is the President of the Society. The royals toured the facilities to view four exhibitions and then participated in a business leaders’ roundtable discussion with Prince Hassan and other business leaders.

He then hosted a Prince’s Trust International reception at the British Ambassador’s Residence, meeting with 40 partners and businesses who work with the Trust’s international branch.

Finally, Prince Charles and Camilla attended a centenary celebration at the Jordan Museum. In a speech, Prince Charles said: “As both our countries build back after Covid-19, I need hardly say that we must place a priority as we have never done before on protection of our environment.”

He added: “I have recently attended the Cop26 climate summit in the UK where some important steps were taken to limit the global rise in temperatures. Success will require the sustained commitment of the global community to ensure that countries like Jordan have the support they need to find ways of adapting to a changing climate.”

Prince Charles and Camilla commence their royal visit to Egypt on November 18th 2021.