Milestones of a Monarch: The Queen opens Canadian Parliament for the first time 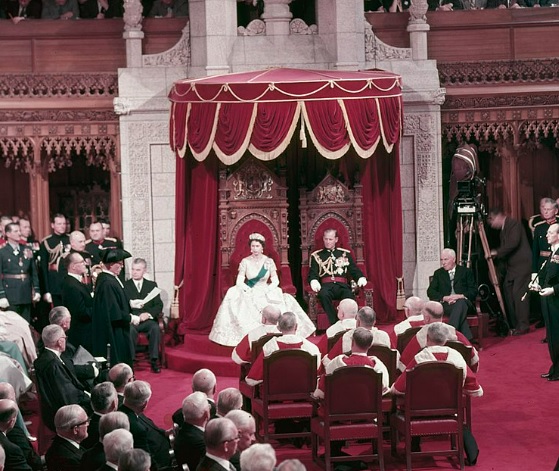 By BiblioArchives / LibraryArchives from Canada, CC BY 2.0, Wiki Commons

The Queen’s first official tour of Canada as its Sovereign included the State Opening of Parliament—the first time a Canadian monarch had performed the duty.

The Queen and the Duke of Edinburgh carried out their Canadian tour as Monarch and consort in October 1957 (they had previously visited in 1951), travelling to Ottawa, Ontario, between 12-16 October specifically to open Parliament.

The Canadian State Opening of Parliament resembles the affair that takes place in the United Kingdom. On 14 October, The Queen delivered the Speech from the Throne in the Senate Chamber—she is not allowed to enter the House of Commons, opening with, “For the first time the representatives of the people of Canada and their Sovereign are here assembled on the occasion of the opening of Parliament. This is for all of us a moment to remember.”

With Prince Philip seated to her left and Canadian Prime Minister John Diefenbaker to her right, The Queen began a speech that outlined the goals of the 23rd Session of Parliament, which would last until 1 February 1958.

The Queen spoke of the great resources of Canada: “You have come here to form this new Parliament from across a great land, a land far wider than either of those older countries that first gave it birth. I am proud to contemplate the great heritage of this nation-the minerals, the forests, the lands, the waters, the sources of power and energy which fire your ever-growing industries. But I am more proud to contemplate the spirit and ideas which brought this country to nationhood, and now, drawing reinforcement and enrichment from many lands and peoples, have given Canada a national character peculiarly her own.”

The Queen’s Speech also highlighted how the Canadian government believed that joining NATO was paramount for global peace and deterrent; how working with the United Nations would “preserve security” and “bring about a wide measure of disarmament”; looked forward to working with provincial governments to discuss “fiscal relations to seek better understanding and arrangement of many aspects of our public finances”; would focus on old age security pensions and assistance as a main legislation goal, as well as war veterans’ allowances; would work to secure better income for farmers and fishermen, and new markets for Canada’s agricultural and fisheries output; and how the federal government would work to develop resources across the country, especially electrical power in the Atlantic provinces, a dam on the South Saskatchewan River, and water power in British Columbia.

The Queen concluded her Speech from the Throne by praising the country for being welcoming to her and Prince Philip. “As I now address you here for the first time, I will call to your minds the words of the earlier Elizabeth when, more than three centuries ago, she spoke from her heart to the Speaker and members of her last Parliament and said ‘Though God hath raised me High, yet this I count the Glory of my Crown, that I have Reigned with your Loves.’

“Now here in the new world I say to you that it is my wish that in the years before me I may so reign in Canada and be so remembered. On this happy day when we give thanks to God for all that He has bestowed on us, I ask that He may bless and guide you.”

The Queen would return to the Senate Chamber in 1977 to open the third session of the 30th Parliament, with Prince Philip at her side. In this speech, she spoke of the generation of Canadians that had been born and grown up in the 20 years since her previous visit, “I have always been full of admiration for what Canada is: the new generation fill me with confidence for what Canada can become.”

The Queen has paid 22 official visits to Canada during her reign—more than any other Commonwealth realm.