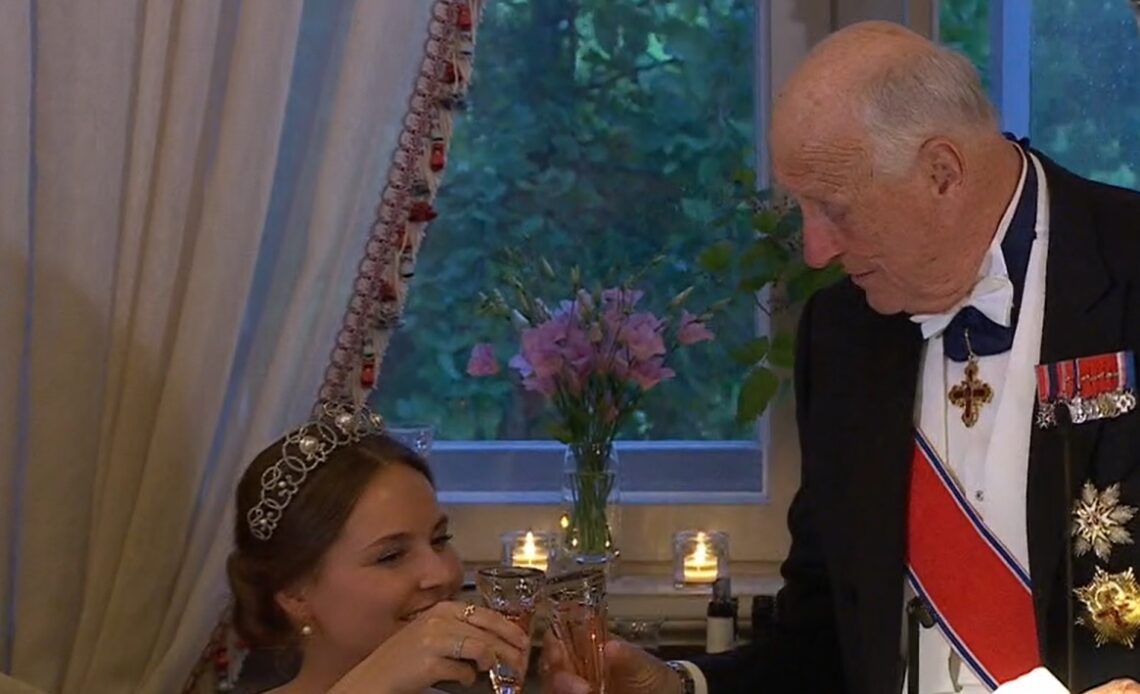 Friday night was the pinnacle of the royal year. King Harald and Queen Sonja of Norway hosted a gala dinner in Oslo to celebrate Princess Ingrid Alexandra’s 18th birthday.

From about 7:30 pm, the halls of the Royal Palace started filling with people – ordinary Norwegians that have in some way contributed to the lives of their community or country. But also friends of the young Princess, who seemed thrilled to have the opportunity to be there.

Princess Märtha Louise’s three daughters, Maud, Leah and Emma, were also present and wearing recycled gowns from their mother, but they entered the banquet hall together with the rest of the guests.

Before food was served, it was time for the speeches: Queen Sonja was the first to take the microphone and told her granddaughter: “Hold on to who you are, Ingrid. Dare to think along new lines and without constraint – to do things your own way. And remember, being perfect is not an end in itself. You have everything you need to make wise choices and create a life that will be rewarding for you, for your loved ones, and for those for whom you one day will be Queen.”

Her entire speech (translated into English) can be read here.

It was then the turn of King Harald, who highlighted how well she had performed on her first official duties in connection with her 18th birthday and concluded his message by saying: “Your great-great-grandfather, King Haakon, adopted the motto ‘We give our all for Norway.’ We are repeatedly being challenged to rethink the significance of this phrase – what it means in practice. This does not just apply to us as members of the Royal Family, but to everyone who lives in this country.”

Once he sat back down, the Princess hugged him, and he placed a kiss on her head.

His entire speech (translated into English) can be read here.

And then, to the surprise of many, the birthday girl herself spoke, thanking everyone for being there and thanking her family for the support and for balancing the royal side with the more “normal” side. In the meantime, she confessed to being a fan of the hit tv show Sex and the City.

She went on to shed a few tears when it came time to thank her brothers: “Dear Marius and Magnus, you are my safety net. I know I can always come to you when something is bothering me.”

She then went on to praise Norway and everything it stands for; she spoke about freedom, and future challenges, saying: “And most importantly, we are determined to continue finding better solutions than the ones we already have. We all have our place in this society. We are different, we have been given different tasks, and we know how to do different things. Together we make up the Norway we love so much.”

Her entire speech (translated into English) can be read here.

And finally, it was mum and dad’s turn to move the audience to tears. Crown Prince Haakon and Crown Princess Mette-Marit opted to make a joint speech, taking turns in talking. They discussed how proud they are of being her parents and the support she will always have in all the challenges she will face in her future.

Crown Princess Mette-Marit described the moment she was born: “On the day you were born, 18 years ago, Pappa and I drove from Skaugum to the Rikshospitalet University Hospital. Later that same day, after a truly beautiful birth, we came home with the miracle that is you. […] Ingrid, I could not be more proud of the girl I have been privileged to follow since the first time your clear brown eyes peered up at me after you came into the world.”

Crown Prince Haakon finished the speech by reminding her of a profound truth: “Dearest Ingrid, you are a multi-faceted and fantastic person, complete and whole unto yourself. Remember that there is room for everything that is you. All of your weaknesses and strengths, all your vulnerabilities and skills.”

Their entire speech (translated into English) can be read here.

Princess Ingrid Alexandra turned 18 in January, but because of health safety restrictions, the celebrations have been postponed to June. A blessing for all royal watchers, as it allowed for a historic moment: the tiara-and-orders debut of two other Princesses, both of whom are next in line to their respective thrones: Princess Catharina-Amalia of the Netherlands, who chose a pink gown and the star setting of the Pearl Button Tiara (the same as her mum wore on her wedding day), and Princess Elisabeth of Belgium, who debuted a new tiara.

In a picture released by the Norwegian Royal Court, Princess Ingrid Alexandra poses with her royal peers, as well as Princess Estelle of Sweden, looking lovely in a baby blue gown with some of the flowers from her mother’s dress at the waist and on her headband (she is way too young to wear a tiara), and Prince Charles of Luxembourg, looking lovely in his cream shorts and navy jacket.

There were some notable absences, including members of the British Royal Family, Queen Letizia of Spain and/or Princess Leonor, and Prince Christian of Denmark. Since the two heirs are born only a few days apart and will be celebrating their 18th birthdays in October of 2023, one has to wonder if more gala evenings are on the agenda.