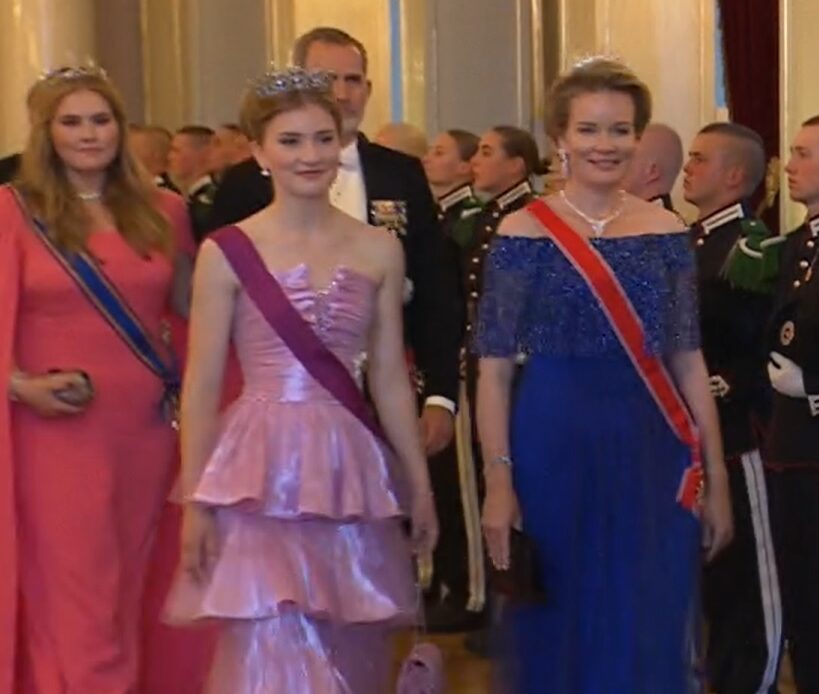 Princess Elisabeth of Belgium made her gala debut on Friday night when she took part in the official celebrations for Princess Ingrid Alexandra of Norway’s 18th birthday.

Wearing a pink/mauve Armani Privé gown, the Duchess of Brabant looked like a fairytale princess, with her Order of Leopold sash, a delicate bracelet on her left wrist and a large pink ring on her left ring finger.

But the piece that made heads turn was her tiara. Smaller in circumference than most, and taller than any other Belgian diadem, it was a piece that no one was able to recognise. Many wondered if she would go small and wear the Wolfers Tiara (which, instead, ended on Queen Mathilde’s head) or the Laurel Wreath Tiara, which was the sole diadem that Mathilde used in her days as Princess.

Instead, she went with this new jewel. Made entirely of diamonds, it has nine taller points, set on what look like fleurs de lys, and eight lower points that have what look like butterflies. All “spikes” are topped by round diamonds.

Many have wondered if the tiara could be a rework of a tiara famously worn by Queen Elisabeth of Belgium in one of her most famous photographs, but, while they are both floral diadems, the style of flowers seem to be too different for the two tiaras to be the same.

For now, the Belgian Royal Palace has not released any details about the tiara, so we have no idea if it is an entirely new piece, a rework of some old pieces, or an old piece purchased specifically for the Princess.

We don’t know if the tiara is property of Princess Elisabeth, of the Belgian Crown or if the piece is a loan from a jeweler. And, if it was a gift (like the Laurel Wreath Tiara was gifted to Mathilde by members of the Belgian nobility when she married Prince Philippe), we have no idea who it came from.

Perhaps we will have to wait for this piece to make its debut during an event in Belgium to have some more information, and, judging from her choices last night, we can already say that it will be a success.