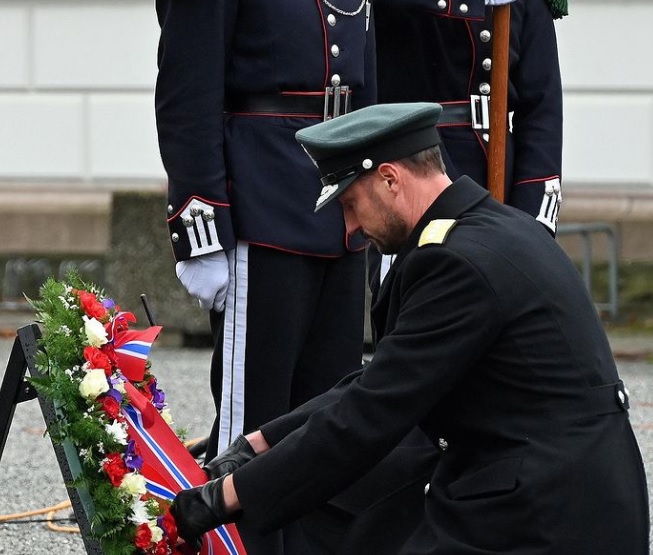 Norwegian Armed Forces Memorial Day has been marked with Crown Prince Haakon placing a wreath at the national veteran monument at Akershus Fortress in Oslo. At the ceremony at Akershus fortress, on Sunday November 7th 2021, Chief of Defence, General Eirik Kristoffersen gave the memorial speech before he asked the Crown Princeacting as Regent, to place the wreath. Guardsmen from His Majesty the King’s Guard stood guard of honour at the monument. Parliament President Eva Kristin Hansen and Minister of Defence Odd Roger Enoksen were also present during the ceremony.

After the wreath-laying ceremony, the Crown Prince Regent participated in the memorial service in Akershus Castle Church, where the field priest, Lieutenant Colonel Kyrre Klevberg, officiated. During the service, the Minister of Defence gave the memorial speech and Crown Prince Haakon lit the Armed Forces’ memorial candle, followed by a minute’s silence.

This Norwegian memorial day was introduced in 2007 and the celebration takes place on the first Sunday in November. This is the day to honour and remember all who have lost their lives in the Armed Forces’ service in and outside Norway. The main event takes place at Akershus Fortress in Oslo, but the day is also marked with events elsewhere in Norway and abroad.