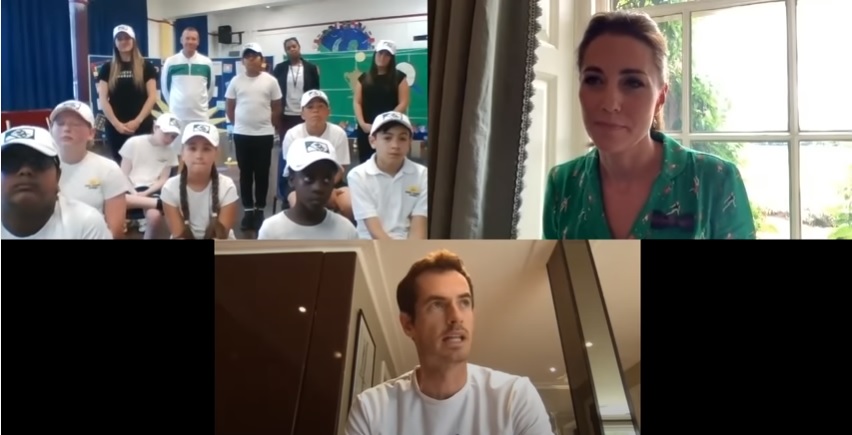 The Duchess of Cambridge joined forces with Wimbledon and Olympic champion Andy Murray to surprise schoolchildren at Bond Primary School to coincide with what would have been the closing weekend for the tennis championships.

The Duchess and the children chatted for a few minutes about how they’re keeping active in lockdown and their favourite memories of Wimbledon – with Kate revealing that she thinks tennis is brilliant for showing great sportsmanship, especially at the All England Championships. The Duchess then revealed she had a surprise for them.

Kate told the students, “I’ve got a very important person here that’s going to come and join us, that would love to meet you guys and might be able to share some tennis tips as well with you. I’ll give you a few clues and see if you can guess who this special guest might be.

“So, he is a he. He plays tennis for Great Britain. He’s a two-time Olympic champion. He’s a former World Number One. Can you possibly guess who this might be?”

The students immediately guessed who Kate was talking about: Sir Andy Murray. They chatted for a few minutes about life in lockdown and Andy revealed that he found the first five or six weeks easy, but after that it was harder to find things to do to keep his three children entertained; and that he’s found homeschooling difficult.

Kate then asked the students if they had any questions for Sir Andy and he told the students that he was good at tennis and that he played it with his brother growing up and that’s why he chose it for his career. His mother, Judy Murray, coached them and “it was a really fun thing to do, and I got to travel to a lot of places,” he said.

Kate then asked the star if he had any tips for the students, “if they want to take up tennis a bit more professionally.”

Sir Andy Murray has won the Men’s Singles Championship at Wimbledon twice, in 2013 and in 2016. In 2013, Kate didn’t attend the match as she was heavily pregnant with Prince George but she revealed later that she wrote him a congratulatory letter after his win, the first time a British man had claimed a singles title at Wimbledon in almost eight decades. In 2016, she and Prince William met the champion after his winning match.

Before ending the chat, Kate asked if he missed playing competitive tennis during the pandemic, and he replied that, “I think missing the big competitions, because I’m getting old for a tennis player—you never know how many opportunities you’re going to have left to play the biggest competitions. So missing Wimbledon this week is obviously a shame.

“I’ve missed the travelling, missing seeing friends like everyone else. Family, I’ve not seen my mum and dad for a few months so I’m looking forward to seeing them again hopefully very soon. There’s been some challenges but I guess sometimes when you go through difficult moments like this you learn to appreciate the things you maybe took for granted sometimes?”

Kate previously visited the students at Bond Primary School in January 2018 to see how the Wimbledon Junior Tennis Initiative programme worked. She has also been the Royal Patron of the All England Lawn Tennis and Croquet Club, which hosts the Wimbledon Championships, since 2016.

The Wimbledon 2020 Championships were cancelled this year due to the COVID-19 pandemic, and two weeks ago, when the tournament would have normally begun, Wimbledon released a video narrated by Kate promising that the tournament’s return “will have been worth the wait.”