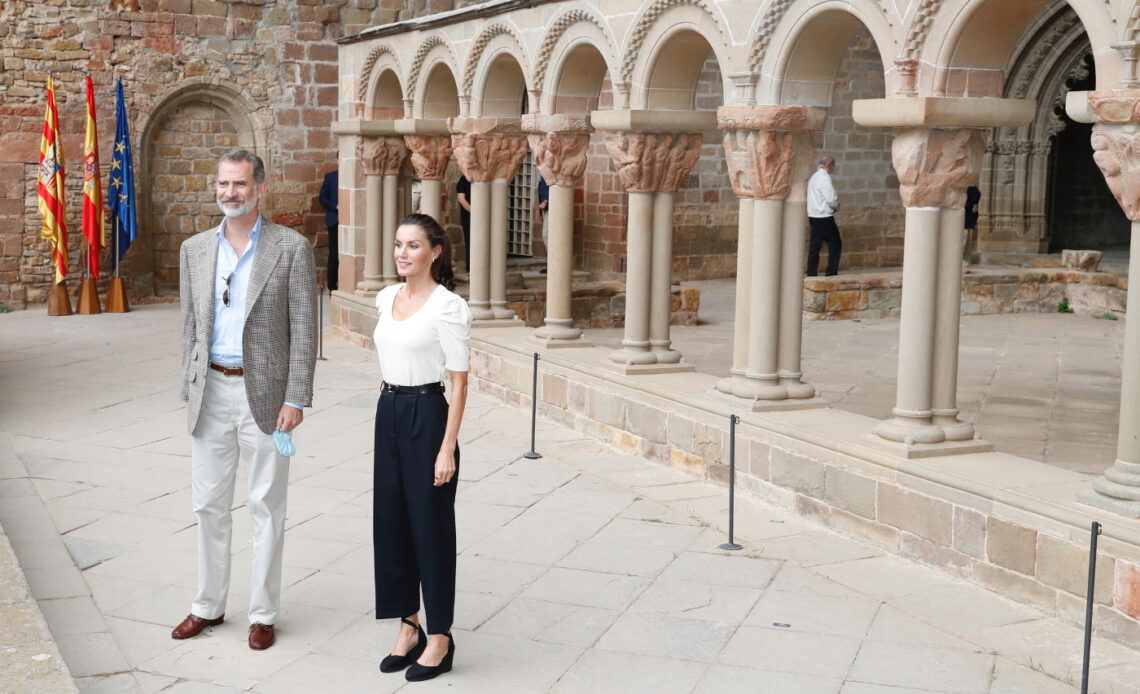 King Felipe and Queen Letizia continued their tour across Spain, visiting Aragon. During their visit, Their Majesties visited the Old Monastery of San Juan de la Peña, the town of Jaca and the Ice Pavilion in Aragon for a working meeting with the tourist sector.

Their Majesties were joined by José Manuel Rodríguez Uribes, the Minister of Culture and Sports, as their tour was in promotion of Spanish tourism.

At the Old Monastery of San Juan de la Peña, King Felipe and Queen Letizia met with Francisco Javier Lambán, the President of the Government of Aragon; José Javier Sada, the President of the Cortes de Aragon; María del Pilar Alegría, the Government’s delegate in Aragon; Juan Manuel Ramón Ipas, the Mayor of Jaca; Félix Longás, a member of the Royal Brotherhood of Knights of San Juan, and other dignitaries.

King Felipe and Queen Letizia toured the new exhibition space at the Monastery, which has been updated for an exhibit about the Count of Aranda’s birth in 1719. Their Majesties toured the facilities and officially opened them.

The Old Monastery of San Juan de la Peña is partially carved into the stone and dates back to the Middle Ages. Inside, it contains priceless artwork from the 12th century. In the second floor of the monastery are the resting places of several of the kings of Aragon and Navarre.

Following their visit to the Old Monastery, Their Majesties traveled to Jaca to tour the most famous streets and meet the people who live there. King Felipe and Queen Letizia traveled to the Cathedral of San Pedro where they learned why a white flag has been placed at its highest point: it signified that the city was free of epidemics for the pilgrims who were following the Camino de Santiago; and since the Pyrenees are free of epidemics again, the white flag was raised at the Cathedral again.

On their last stop, King Felipe and Queen Letizia visited the Ice Pavilion in Aragon to meet with the city’s tourism sector workers. According to the Royal House, tourism represents over 8% of Aragon’s GDP and is important for population growth in the area.

“Inland tourism has the opportunity to be the first to recover, since the behavior of travelers is going to reinforce non-crowded destinations, proximity tourism, in contact with nature. In short, sustainable tourism,” the Royal House notes.

Their Majesties spoke with the representatives about how combat lower tourism numbers caused by the pandemic before leaving the city.