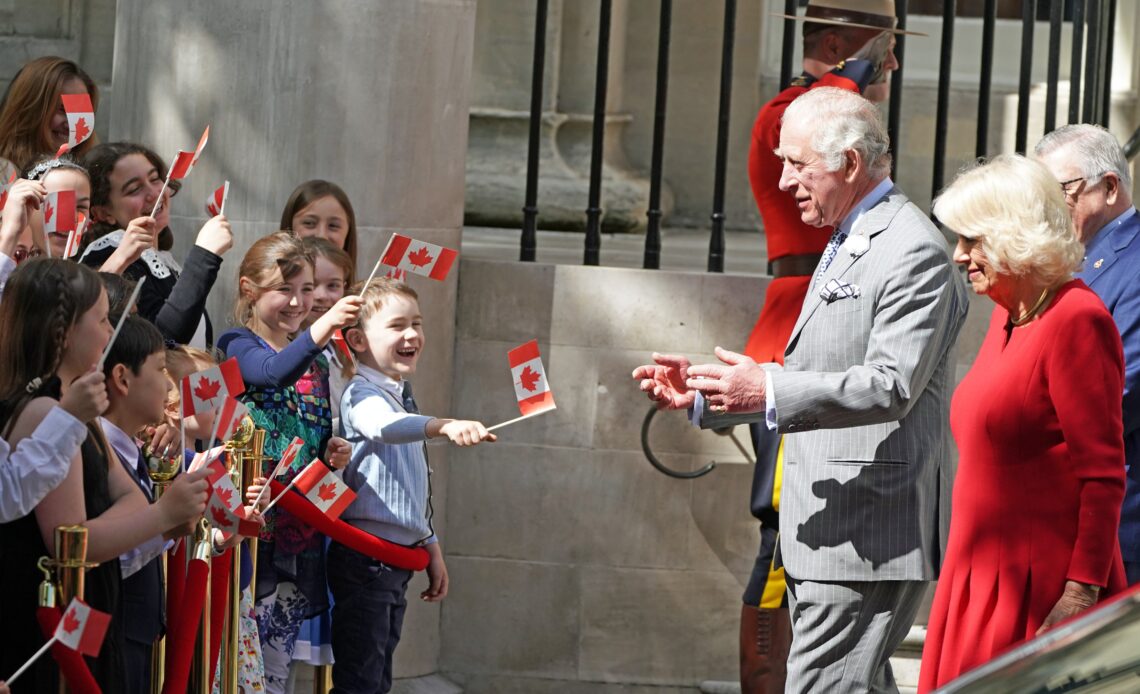 The Prince of Wales and the Duchess of Cornwall got into the Canadian spirit with a visit to Canada House on May 12th 2022 ahead of their tour next week to the country.

Their visit to the London centre of Canadian life in the UK saw them learning more about the culture and people they’ll meet next week. Upon arrival, the royals were greeted by the High Commissioner for Canada in the UK, His Excellency the Hon. Ralph Goodale and his wife Pamela.

Inside Canada House, the royals viewed art on display from the Shenkman Indigenous Art Collection; met with young people who are studying and living abroad in the UK; and then were treated to a small performance from the hit stage musical ‘Come From Away’ which is set in Newfoundland and depicts the events of the September 11 terrorist attacks, when the community of Gander opened its homes to stranded travellers who could not fly into the United States.

In a short speech, the High Commissioner said that Canadians were looking forward to celebrating The Queen’s Platinum Jubilee.

“Those of us who come from the Great White North, as we call it, are very proud that Her Majesty has visited Canada 22 times, more than any other country. She is, after all, the Queen of Canada,” Goodale said.

“It is typical of this wonderful Sovereign that she wants her jubilee to be a celebration of the accomplishments and the service of others.”

Clarence House announced earlier in the year that Prince Charles and Camilla would visit Canada from 17-19 May, touring the provinces of Newfoundland and Labrador and Ontario, and the Northwest Territories.

The royal couple will begin their visit in Newfoundland and Labrador on 17 May. The second day of their tour will see them in capital region of Ottawa, Ontario, culminating in a special reception to mark The Queen’s Platinum Jubilee. The final day will see the royals in the Northwest Territories in northern Canada.

Clarence House noted that, “Canada is seeing the impact of climate change and so this tour will highlight an emphasis on learning from Indigenous Peoples in Canada as well as a focus on working with businesses to find a more sustainable way of living with global warming.”

Other engagements will focus on communities, domestic violence awareness, the military, and the ongoing situation in Ukraine.

Their visit next week marks Prince Charles’s 19th visit to Canada and Camilla’s fifth. His first visit was in 1970 while Camilla’s was in 2009. They most recently visited in 2017 to celebrate Canada 150—the country’s 150th anniversary. The Queen has visited Canada 22 times throughout her reign, last visiting in 2010; this is the most widely-visited realm by The Queen.

Royal Central will bring you all the coverage of Royal Visit Canada next week!