Taking a look at the use of King Harald’s monogram

Most royalty have some kind of monogram. Most royals also have a personal and a family coat of arms. The monograms are for more personal use than the coat of arms, and therefore, we do not see them so often. In Norway, the case is that the King’s monogram is used by the King personally and in several instances which are closely related to His Majesty.

In this article, we will look at King Harald’s monogram and those who use one or more forms of his monogram.

The King uses his monogram most privately as a letter mark. It is also known that his monogram is sewn into some garments, handkerchiefs and similar possessions that the King has.

In the flag of the Royal Life Guard, we can see the King’s monogram in the four corners of the banner on a white background. Photo: Oskar Aanmoen / Royal Central.

The best-known use of the monogram outside of the King’s personal sphere is by the Royal Guard. They use the King’s monogram with the number five, in the colour gold and with the Norwegian King’s crown above it. The only difference is that in addition to these symbols, the actual monograms are flanked by two swords, also in gold. The monogram will usually be on a black background, but for example, in the lifeguard’s flag, the monogram is on a light background.

The Royal Guard uses the King’s monogram as a symbol in general, but also as a decoration on the companies’ flags and the musical instruments. 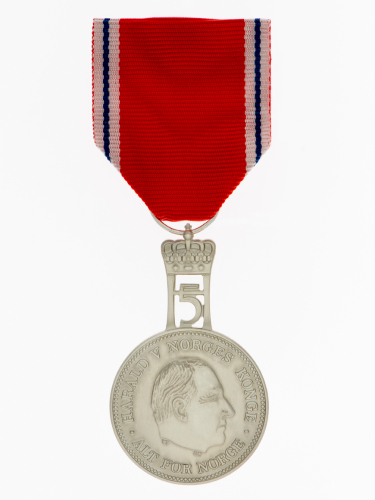 The King’s monogram is central in the layout of the St. Olav`s medal. Photo: Jan Haug / The Royal Court.

The King’s monogram also has a central role in the decoration of the medals that the Royal House distributes. Amongst many, the St. Olav’s Medal, the King’s Memorial Medal and plenty of anniversary medals have been decorated with different versions of the King’s monogram.

The King’s monogram with Roman numerals is not used often. Here is one of the few versions on a flag at the King’s visit to the royal yacht “KS Norge” earlier this year. Photo: Oskar Aanmoen.

When King Harald had been a monarch for 25 years, he used the King and Queen’s joint monogram in gold. The monogram was then used with laurel wreath and the number 25 below the monogram itself.