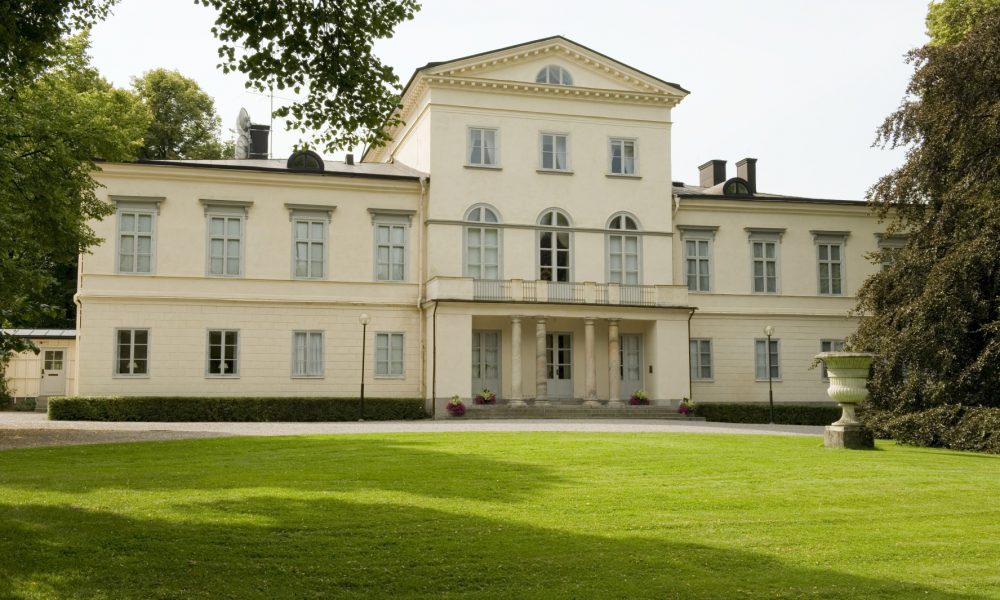 It might be the birthplace of Sweden’s current king and the home of Crown Princess Victoria and her family, but Haga Palace has also served many different functions over the years, ranging from an orphanage to a guest house for visiting foreign statesmen to a conference facility.

The palace was modelled after an Italian villa and built in 1802 by architect Carl Christoffer Gjörwell at the direction of King Gustav IV Adolf. Named the Queen’s Pavilion, its architecture was intended to give the feeling of a family home rather than an ornate palace.

According to the Swedish Royal Court, “The exterior was given a simple classical design, with a high frontispiece with carved pediment. The balcony is supported by four Doric columns on the entrance side.”

Other members of the family used Haga after Oskar I’s death, including his son, Prince August, who died in 1873. August’s wife, Princess Teresia, Dowager Duchess of Dalarna, continued to occupy the home until 1914.

King Gustaf V’s youngest son, Prince Erik, then lived periodically at Haga until he died in 1918. Like many unused palaces and country homes across Europe, Haga was then used to house homeless orphans at the end of WW1.

In 1932 the palace was updated into a modern home for Gustaf Adolf and Princess Sibylla and their family, and it is where their son and Sweden’s future king, Carl Gustaf, was born. The couple and their five children, all born at Haga, enjoyed happy years there until 1947 when Prince Gustaf Adolf tragically died. The Princess then moved to the Royal Palace with her children.

The palace sat unused until 1966 when King Gustaf VI Adolf granted Haga as “a guest residence for distinguished foreign visitors who are guests of the government, or for whom the government otherwise deems it appropriate to enjoy this privilege.” Haga again went through extensive renovations to modernize the building for guests, and it also had to be totally refurnished since it was empty at the time.

According to the Royal Court, the first name in the guest book is the Russian head of government Nikita Khrushchev and his wife Nina. After Sweden joined the EU, the number of visits decreased and the building “was used mainly for talks and conferences.”

The right to use Haga was transferred by the government to King Carl XVI Gustaf in 2009, meaning it could be used for the Swedish Royal Family again as a residence. After Crown Princess Victoria and Prince Daniel married, the palace was granted to them as a home, and they moved into Haga Palace in 2010.