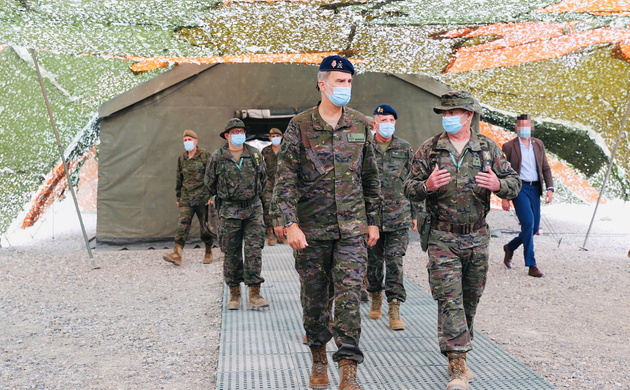 King Felipe travelled to the Autonomous Community of Aragona to take part in the annual Army principal exercise.

“Toro 21” is the name of the exercise, which this year was focused on integrating the new manoeuvre created by the Castillejos Division, as well as revising the Standard Operative Procedures at the division level. It was also used to renew the certification of the camp as an operative centre for the Army.

The exercise will be finalised on the 19th of September and will take place between the Autonomic Communities of Aragona, Madrid, Andalusia and Valencia. Toro 21 counts on the activity of about 700 to 750 soldiers from the Spanish Army.

On 13 September, His Majesty arrived at Sancho Ramírez Camp, near the town of Huesca, accompanied by the Army Chief of Staff, Army General Francisco Javier Varela Salas and the Chief of the Castillejos Division, Division General Carlos Jesús Melero Claudio.

In the Central Command Post, His Majesty listened to the Division Chief explain the exercise, its objectives, the training scope, the final situation, the environment, and the current tactical situation for Toro 21. King Felipe then got to see the exercise mission take place.

At the end of the exercise, His Majesty was present for several videoconferences detailing the role Central Command has in controlling and developing exercises for the Army.

King Felipe then moved to the Operations Centre, where he witnessed a live resolution of a conflict derived by the localisation of a Sensitive Target made up of a group of missiles. After that, he moved on to take a look at the Media and Communications Centre and the Centre of Deployable Security.

His Majesty concluded his visit with a meeting with military personnel and the civilian authorities present, which included the President of the Autonomic Community of Aragon Francisco Javier Lambán, the President of the Aragonese Courts José Javier Sada, the Government Representative in Aragon Rosa María Serrano and the Mayor of Huesca Luis Felipe Serrate.

King Felipe has strong ties with the military that go far beyond his standard role as Commander in Chief. He has trained in all three major branches (Army, Navy and Air Force) and still maintains friendships with people with whom he trained.