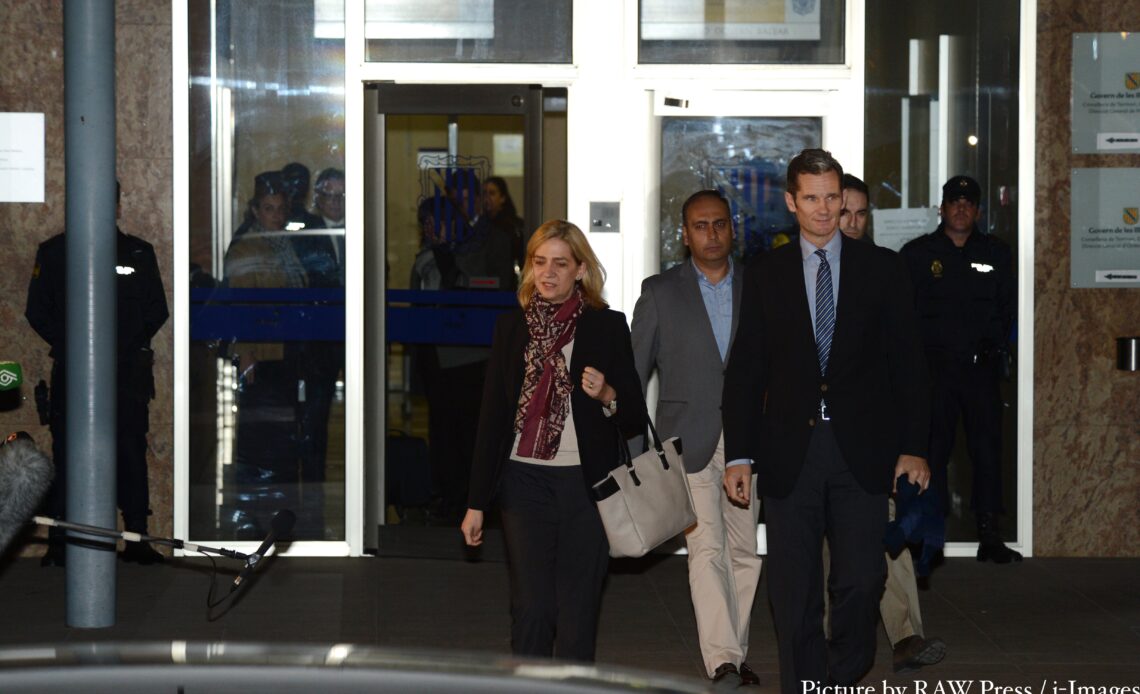 It was officially announced via a release to EFE that Infanta Cristina of Spain and Iñaki Urdangarín have decided to “interrupt their marital relationship.”

After 24 years of wedded life and the entire history of the last decade, it seemed impossible for this marriage to dissolve. However, over the past few days, it became clear that a separation was the only possible solution.

Infanta Cristina of Bourbon and Greece met handball player Iñaki Urdangarín in 1996, during the Atlanta Summer Olympic Games – or at least that is the date communicated by the Spanish Royal Household when the couple announced their engagement. Some sources, however, state that the two met a lot earlier.

Rumours started circulating about a possible relationship between the two in April of 1997, and on the 30th of that same month, the Spanish Royal Household announced the engagement of Infanta Cristina and Iñaki Urdangarín.

The hand request (which is a fancy way of referring to a press opportunity to celebrate the engagement) took place at Zarzuela Palace on the 3rd of May 1997, and, on that occasion, the couple announced that they would wed in the city of Barcelona, where Urdangarín was playing for the FC Barcelona handball team.

On the 14th of May, the Spanish Royal House officially announced that the ceremony would take place on the 4th of October of that same year.

The couple carried out a series of engagements in connection with their upcoming wedding, including a visit to the Catalonian Parliament on the 3rd of September.

On the 26th of September, King Juan Carlos announced that the couple would receive the Dukedom of Palma de Mallorca, and the King’s decision was ratified in the State’s Official Bulletin the following day.

When the 4th of October arrived, Barcelona woke up shining under the autumn sun. The Santa Eulalia Cathedral in the Catalonian capital was full of guests, from foreign royals to state authorities, from family members on both sides to celebrities, especially from the world of sport.

Following a slight head bow to ask for her father’s permission, Infanta Cristina said, “Yes, I do,” to her husband wearing a Lorenzo Caprile dress topped with the family’s floral tiara and the veil used by Queen Victoria Eugenia.

Iñaki Urdangarín made countless statements about the births of his children and the joys of parenthood; when Juan was born, he said: “I have lived many beautiful things with the Infanta but never anything like those 10 minutes that have changed our lives.”

The couple started undertaking regular engagements on behalf of the Crown for the first decade of their marriage; in 2009, however, they moved to Washington D.C., where Iñaki Urdangarín was working for the Spanish telecommunications giant Telefónica.

In 2012, the couple made their way back to Spain, and in 2013 they moved again to Geneva, Switzerland, where the Infanta has been residing ever since.

Knowing that, once Felipe became King, the two Infantas would no longer have an official agenda, the fact that both daughters of King Juan Carlos held “regular” jobs outside Casa Real was expected.

Infanta Cristina has worked for La Caixa Foundation from 1993 until 2020. Since 2013, when she took up residence in Geneva, she has also worked as an interagency coordinator within the Aga Khan Trust for Culture of the Aga Khan Foundation.

But of course, the couple’s darkest days were yet to come. In 2011, following months of speculation, Iñaki Urdangarín was named among the central figures in the Noos case, and his wife was soon to follow.

They were both accused of tax crimes and money laundering, and, while Iñaki Urdangarín was investigated straight away, there was some back and forth regarding prosecuting Infanta Cristina, both because she was a member of the Royal Family and because she wasn’t explicitly named in any key documents.

Finally, in 2014, the Supreme Court of Palma de Mallorca judge decided to call upon the Infanta to testify, which she did. Despite the judge’s express prohibition against any recordings of the proceedings, a video shot with a hidden camera was leaked to Spanish newspaper El Mundo, showing a small piece of the Infanta’s deposition.

On the 11th of June 2015, seen as though the legal proceedings seemed ongoing, King Felipe, by then scarcely one year on the throne, took the executive decision to revoke her title of Duchess of Palma de Mallorca, which the Infanta accepted. Since then, she has been known as Her Royal Highness Infanta Cristina.

In 2017, following lengthy legal proceedings, Infanta Cristina was cleared of any wrongdoing but was fined 265.088€, which she was ordered to give back because she was considered to have benefited from her husband’s illegal activities.

In 2018, Iñaki Urdangarín was found guilty of embezzlement and sentenced to five years and ten months in prison. He entered the Brieva penitentiary, near Ávila, about 100km away from Madrid.

Since June of 2021, he is on supervised release from prison, allowing him to relocate to Vitoria, the capital of the Basque Country Autonomic Community. This was a privilege accorded because of good conduct and the non-violent nature of his crime.

In November of 2021, the entire family was seen skiing in the Alps, in a break from the Infanta’s work in the Aga Khan Foundation and Urdangarín’s job at Imaz&Asociados, a law firm based in Vitoria.

And it’s precisely at that law firm where he met Ainhoa Armentia, a colleague of his that has become the centre of public attention. Only on the 19th of January, Spanish magazine Lecturas published a series of pictures of Armentia and Urdangarín holding hands on a French beach, sending media and the public into a frenzy.

Five days later, in a short statement released to EFE, the couple announced that they had decided to “interrupt our marital relationship.”

What happens now seems to be a given, and that is a divorce. However, whether or not this will mean that Infanta Cristina will get back everything that Urdangarín forced her to give up remains an open question. For now, Casa Real is tight-lipped, and it does not seem likely for King Felipe to welcome his sister into the family once again.