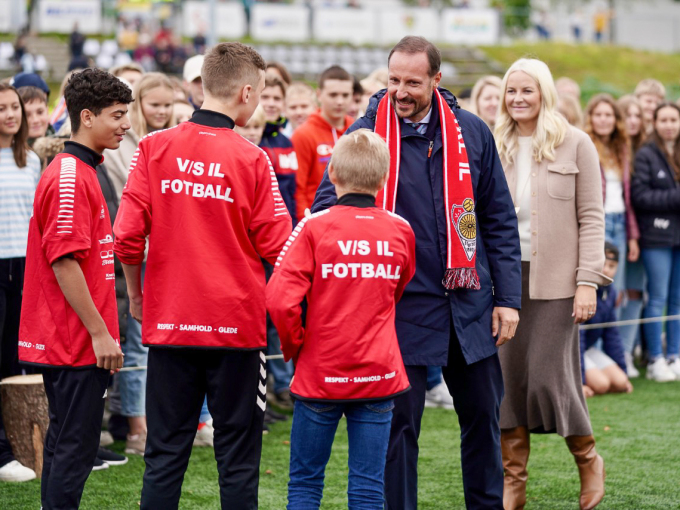 Crown Prince and Crown Princess visited Våler and Moss on their second day of the county trip to Østfold in the region of Viken.

The Crown Prince started the day by meeting several of the village’s volunteers at Bergtunet. At the stands were the Scouts, Østfold model boat club and KNA Varna, who told about their work.

The Bergtunet is a collection of older houses and objects, and during the visit, Crown Prince Haakon got to experience singing, dancing, poetry readings, alpacas and a local speciality called “troll cream.” The Crown Prince also planted a tree in the square. Additionally, a meeting was held with the four middle school students who have made the invention ABS60, an automatic fire ladder. In June, their invention won the Norwegian SMARTingen award.

During the visit, Crown Princess Mette-Marit held a speech in which she said: “One of the most important things for us humans is to have a place we can call ours. A place we love that we can call home. And the hometown, that is where the heart is. Every time we visit our country, we experience that the people we meet are happy in their hometown. We have also noticed this clearly here in Våler.”

After this, Crown Princess Mette-Marit and Crown Prince Haakon met four siblings from Afghanistan who came to Norway as refugees in 2016 over a cup of tea.

The visit to Våler ended with football and Zumba dancing before the journey continued to the city of Moss, where the royals visited the Skoggata home for the elderly in the city centre. There was a quiz and a conversation about today’s news in the garden at the care home with some of the residents.

The visit to Moss ended at Alby Manor and the famous Gallery F15. There, a children’s choir performed for the royals. In addition, Alby pastry was served, and Crown Prince Haakon was briefed on the gallery’s work to convey art to children and young people.