The Crown Prince of Norway has opened a new learning centre for young people in Gol. The centre, “UngInvest“ has a new department for up to fifteen young people and aims to help more people in the area complete upper secondary education.

Crown Prince Haakon was greeted on arrival by the CEO of UngInvest, Ingebjørg Mæland who has led the process which has seen young people, teachers and others discuss how best to work together for teenagers to complete upper secondary education. 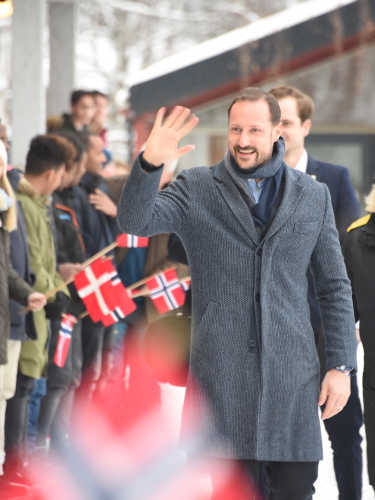 The centre has been supported by the The Crown Prince and Crown Princess’ Foundation since 2011.

The Crown Prince and Crown Princess’ Foundation was launched at the time of the couple’s marriage in 2001 when they chose to give their support to a variety of issues, both in Norway and abroad. In Norway, it has been a priority to give money to children’s causes to ensure that more could grow up safely and that young asylum seekers could settle positively as members of Norwegian society. Internationally, the Foundation has contributed in a number of countries, including Uganda, Russia, Nicaragua and Bangladesh.

“UngInvest” is a learning offering for more than 200 young people in Buskerud county, with branches in Drammen, Ringerike, Kongsberg, Modum, and now also on Gol.  After the visit to the new department, the Crown Prince travelled to Gol sport arena where he was given a tour and met a number of village children and young people who showed off some of their many activities.

In 2014, it was announced in a report that four projects that the Foundation of the Crown Prince and Princess supports are saving Norwegian society costs of around 2.7 billion crowns every year. This corresponds to about 256 million British pounds or 319 million US dollars. Besides working with youth through his foundation, the Crown Prince has, in the past few years, held a conference for young leaders, called “SIKT.”

The Foundation is from 2011 exclusively meant for a Norwegian purpose, and therefore the website is only in Norwegian. You can read more about the Norwegian Royal Court’s explanation of the Foundation in English here.