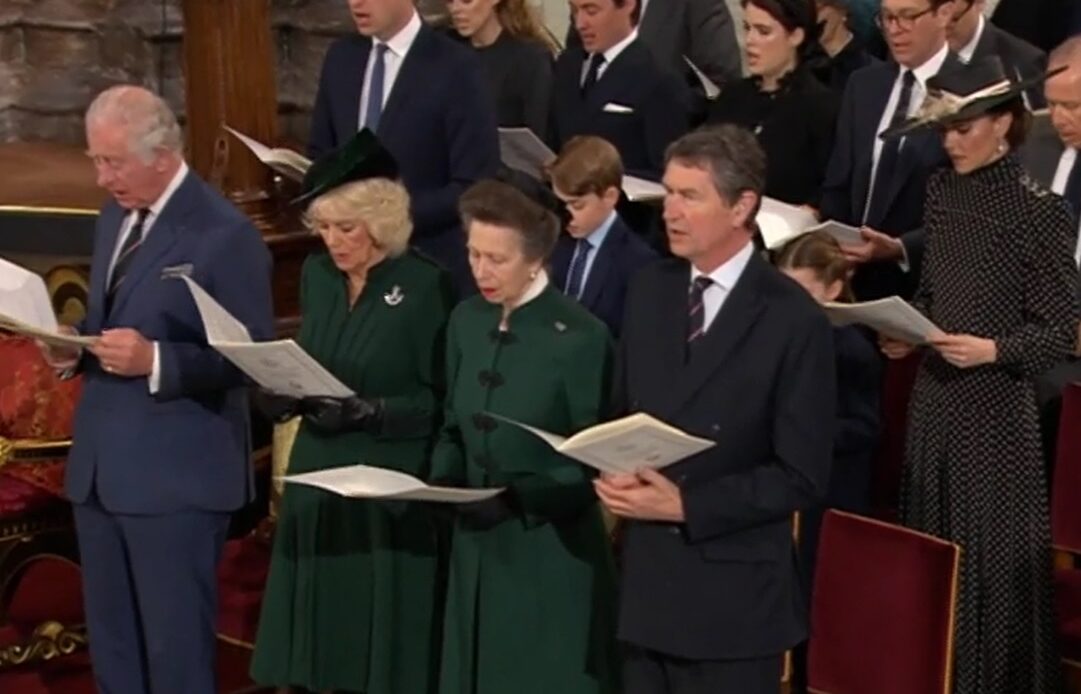 The Queen, the Duchess of Cornwall and the Princess Royal may have had a very special reason for wearing dark green to the memorial service for Prince Philip at Westminster Abbey.

The shade is also known as ‘Edinburgh Green’. Prince Philip’s official livery was dark green and his page at the Coronation wore the shade. Dark green is also one of the colours of half mourning and, as was the case today, it is trimmed with black to denote grief.

The Royal Family’s official website notes that ‘Edinburgh Green’ is a dark shade and was used on private liveries for the Duke.

The Queen chose a dark green coat and hat, both trimmed with black, for this special Service of Thanksgiving which took place just days ahead of the first anniversary of the Duke of Edinburgh’s death.

Their only daughter, the Princess Royal, also wore deep green for the service as did the Duchess of Cornwall. It was also worn by Duke of Edinburgh Award winner, Doyin Sonibare, who gave a moving eulogy to Prince Philip.

There was another special nod in Camilla’s choice. Her outfit was the one she wore when she took over as Colonel-in-Chief of the Rifles from Prince Philip in what would be his final public engagement. The Duchess also wore her Rifles brooch as a tribute.

Queen Letizia of Spain and Princess Beatrix of the Netherlands also chose deep green for the Service.

Other members of the Royal Family wore shades traditionally associated with mourning or half mourning clothes.

The Duchess of Cambridge chose a black dress with white spots and a black hat with white trim, again keeping to mourning protocols.

Princess Beatrice chose a dark grey coat with a purple headband. Both are traditional colours of half mourning. Her sister, Princess Eugenie, wore a black dress with a floral print in white and red and a black, pillbox style hat.

The Countess of Wessex was in deep navy with a small, matching hat. Zara Tindall also chose a mauve blue for the service as did Lady Louise Mountbatten-Windsor.

The four eldest of the Duke of Edinburgh’s great granddaughters were also present with all four wearing smart, dark coats.