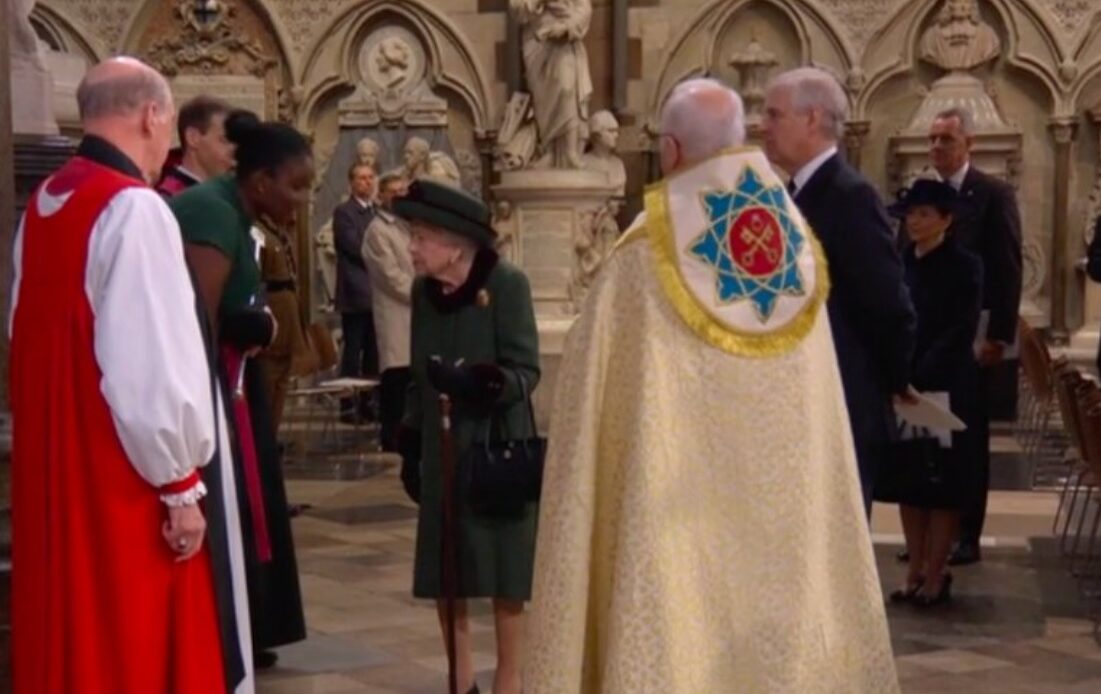 The Queen spent several minutes chatting with Doyin Sonibare who gave a moving eulogy at the Service of Thanksgiving for Prince Philip at Westminster Abbey.

Doyin, who has achieved a Bronze, Silver and Gold Duke of Edinburgh Award began the memorial service with a powerful tribute to Prince Philip and the positive impact that the scheme that was one of his life’s passions has had on tens of thousands of people.

Reflecting on the way her life had changed after she began the scheme, Doyin said ”On reflection, I never thought I could do half of the things I have done in the last decade, yet I’ve been able to do so because of the opportunities presented to me.”

And she added ”In 1956, when The Duke of Edinburgh created the Award, he had a vision to create a programme which supported the development of young people all over the world. Today, you’ve learnt how his legacy has impacted me and how it will continue to impact future generations to come.”

After the service, The Queen walked to Poet’s Corner at the Abbey to thank Doyin for her tribute. The two were seen smiling and chatting happily as Her Majesty passed on her thanks.

Doyin’s tribute began a poignant service which paid tribute to the lifelong service of the Duke of Edinburgh who died in April 2021 at the age of 99. She said:

” My name is Doyin Sonibare, and I started The Duke of Edinburgh’s Award when I was 15. I had previously heard about the Award, but I never applied until my mum encouraged me to. She’s strict and Nigerian, so it’s very difficult to say no to her.

I wasn’t completely sold on the idea at first. I was happy I could learn new skills and build upon interests, such as learning how to drive and playing netball, but I was worried about the expedition. I grew up in East London and had never been camping before. I also had a fear of climbing steep hills – I kept thinking I was going to trip up, roll down the mountain and it’s lights out for Doyin. Fortunately for me, that didn’t happen. My friend constantly said, ‘you are not going to fall, and if you do, I’m right behind you’. That was so comforting. The support of my team and our ability to communicate and work well together resulted in us successfully completing our expedition. I remember thinking to myself, if I could complete this expedition, I can do anything; even though at the time I was 18 and unsure about my future.

I decided to apply to several gap year schemes, and landed my first job as a programme co-ordinator at IBM. I thoroughly enjoyed my work, but I wasn’t ready to hang up my education hat just yet, so I attended the University of Essex. During the summer my old manager, who was aware of my involvement in The Duke of Edinburgh’s Award, invited me to help set up a work experience programme for young people from disadvantaged backgrounds. This programme is still in effect to this very day. A few years later, I completed my degree and returned on the graduate scheme which enabled me to develop my professional skills and pursue my interests in health research.

Over the years, the Award remained a prominent part of my life, from encouraging more young women to pursue careers in technology to partaking in the Do it 4 Youth campaign as captain for London. In October, I started a new job as an Account Executive at Alteryx selling data and analytics automation software to clients. I also began a PhD in sickle cell research and health inequalities at Brunel University London. Looking back, I’m thrilled with how far I’ve come, but most importantly, so is my mum.

So, how did I get my first job at 18 without any professional experience? The Duke of Edinburgh’s Award. All the answers in my CV and interview were all related to the work I had previously done with the Award. Give an example of where you have shown teamwork skills – my expedition in Wales. Give an example of where you have taken initiative – I had to fundraise for my volunteering trip to The Gambia.

It all linked back to the Award, which actually links back to the golden word – opportunity. On reflection, I never thought I could do half of the things I have done in the last decade, yet I’ve been able to do so because of the opportunities presented to me. In 1956, when The Duke of Edinburgh created the Award, he had a vision to create a programme which supported the development of young people all over the world. Today, you’ve learnt how his legacy has impacted me and how it will continue to impact future generations to come.

The world has been through so much turmoil and in these times, it is so important to show our support to young people, to encourage them with opportunities and empower them to reach their full potential. Thank you.”