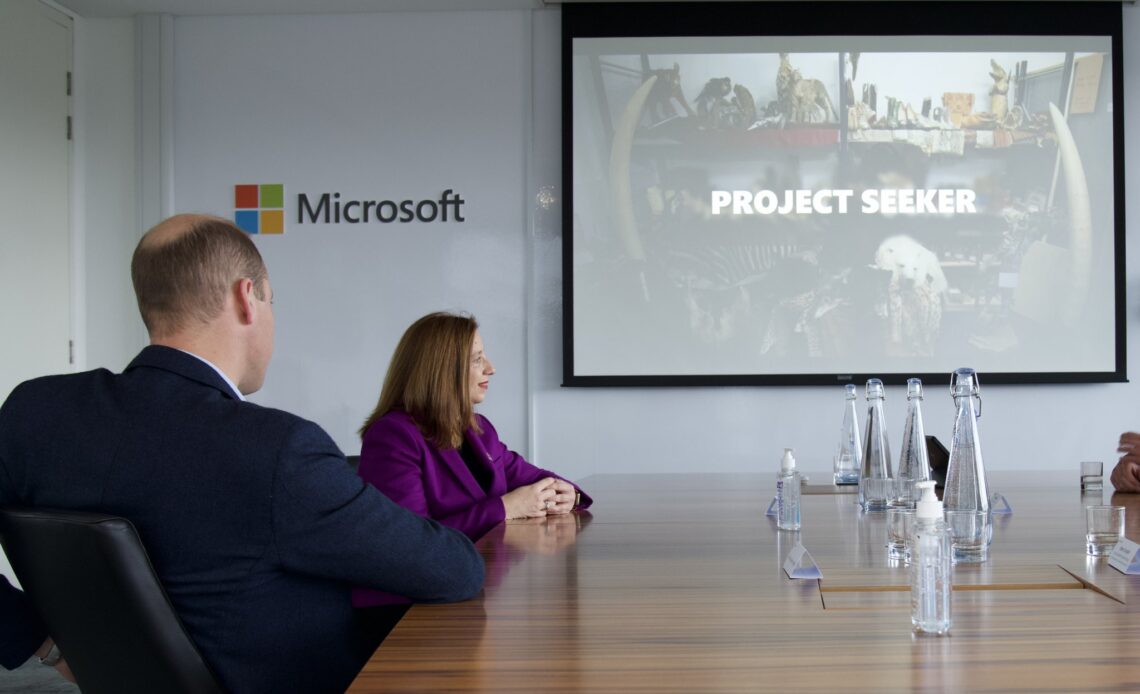 The Duke of Cambridge paid a visit to the Microsoft headquarters in his role as founder of United for Wildlife, to learn more about new AI scanning technology can “increase the detection of illegal wildlife products being trafficked through international airports, and help to disrupt this criminal trade.”

During his visit to the Microsoft UK offices, William met with its CEO, Clare Barclay, to learn more about Project SEEKER, an AI scanning programme that can be installed at luggage and cargo scanners at major border points, airports, and ports to detect illegal wildlife items and immediately alert law enforcement agencies of its findings.

William and Barclay joined in a Teams call with ranger teams in Africa to discuss the illegal wildlife trade, then met with UK Border Force staff, Microsoft apprentices, and the team that developed Project SEEKER.

“The untapped potential of AI and machine learning can help solve some of the world’s most complex environmental challenges,” said Barclay in a statement on the Microsoft website.

“Our first-of-its-kind multispecies AI model Project SEEKER can help tackle the wildlife trafficking trade, while protecting animal ecosystems. The importance of collaboration and partnership with more organisations couldn’t be greater as we look to protect the environment and the world’s most endangered species.”

Kensington Palace posted on Twitter about the engagement, tweeting: “Innovation in the fight against the illegal wildlife trade has come so far over the past decade thanks to @united4wildlife, and as seen today first hand, a new technology that could transform how illegal wildlife products are intercepted at airports.”

Project SEEKER has been tested at Heathrow airport and its results showed that it picked up over 70% of ivory products in luggage and other baggage. Kensington Palace noted that “it can be trained on any species and integrated into current airport screening and scanning infrastructure.”

“The illegal wildlife trade is among the five most lucrative global crimes and is often run by highly organised criminal networks who exploit our transport and financial systems to move illegal animal products and their criminal profits around the world,” said Lord William Hogue, the Chairman of the Royal Foundation and United for Wildlife in a statement.

“This is a hugely complex global issue, but when institutions including transport, technology, financial services and enforcement agencies work collaboratively to share knowledge, expertise, and information it enhances our ability to detect and dismantle the sophisticated criminal networks that sit behind each trafficking act. Working in partnership with the public and private sector is crucial if we are to stop this illegal trade for good.”

William founded United for Wildlife in 2014. Since its inception, the organisation has grown its support to 170 global private sector companies and has trained 85,000 employees, has supported over 288 investigations, and has seen 124 traffickers arrested.