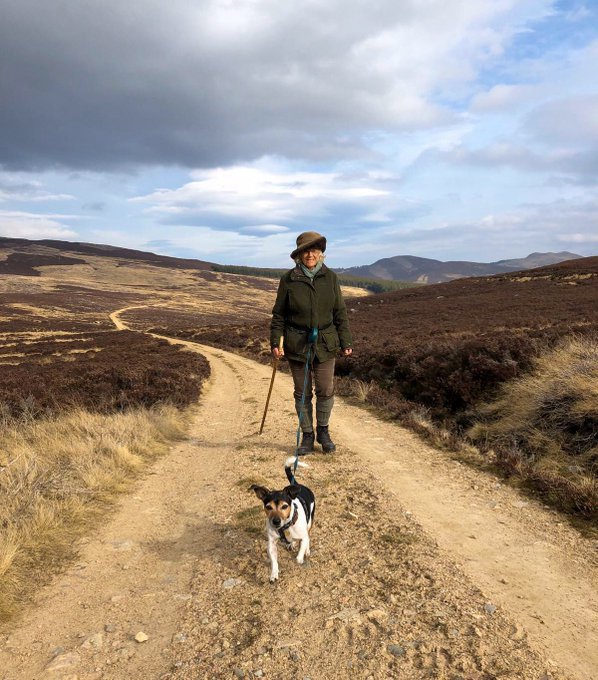 The Duchess of Cornwall will talk about her love for her dogs in her interview on The Emma Barnett Show on Tuesday morning.

“The nice thing about dogs is you can sit them down, you could have a nice long conversation, you could be cross, you could be sad, and they just sit looking at you wagging their tail!” Camilla tells Emma.

The quote was shared ahead of the interview on the Clarence House social media accounts, accompanied by a photo of Camilla with one of her rehomed Jack Russell Terriers, Beth, walking along a path in the UK countryside.

The Duchess of Cornwall rehomed Beth and another Jack Russell Terrier named Bluebell from Battersea Dogs & Cats in August 2011 and September 2012, respectively. Camilla has paid several visits to the animal charity over the years and became Battersea’s Royal Patron in January of this year, in a move that was applauded by the charity’s Chief Executive.

“Battersea has long considered The Duchess of Cornwall to be a very close and dear friend and a huge supporter of our work, so it’s absolutely wonderful to now welcome Her Royal Highness as our new Royal Patron,” Claire Horton said in a statement on the charity’s website.

“Having rehomed two Battersea dogs, Beth and Bluebell, and visited us on numerous occasions, we feel The Duchess is already part of our special Battersea family and we look forward with such enthusiasm to an even closer connection in the years to come.”

Camilla will also chat about her wide-ranging charitable endeavours and patronages during her interview with Emma Barnett. Clarence House posted that she will also discuss her work with the Royal Academy of Dance, The National Literacy Trust, BookTrust, Unicorn Theatre, Medical Detection Dogs, The Royal Voluntary Service and SafeLives.

The Duchess’s interview with Emma Barnett airs at 10:00 am on BBC Radio 5.