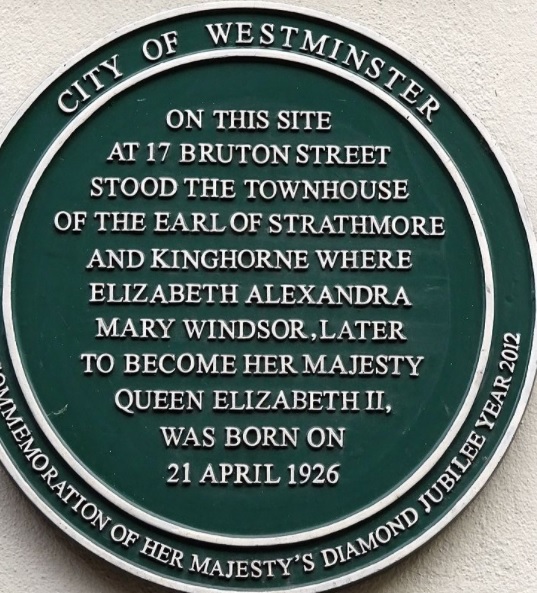 On 21 April 1926, Princess Elizabeth Alexandra Mary was born in London, at the Mayfair home of her maternal grandparents, the Earl and Countess of Strathmore and Kinghorne. The former house in which she was born was at No. 17 Bruton Street and although the house no longer exists, the site is of great historical interest and a focus on this building is all the more timely, as we remember the birth taking place ninety-one years ago this week. The Earl and Countess of Strathmore and Kinghorne owned several estates, Glamis Castle being the Earl’s ancestral seat, together with the country house of St Pauls Walden Bury.  The Countess of Strathmore and Kinghorne had herself been born in Belgravia in 1862 but the location of her daughter’s birth is less certain; among the suggestions of the location of the future Duchess of York’s birth in 1900 include the Strathmore Westminster home of Belgrave Mansions, Grosvenor Gardens as well as St Pauls Walden Bury and Forbes House in Ham, the home of her maternal grandmother, Louisa Cavendish-Bentinck.

Princess Elizabeth Alexandra Mary was born at 2.40am on 21 April 1926, as the first child of the Duke and Duchess of York. It is important to mention that at the time of the princess’s birth, she was third in the line of succession to the British throne after the Prince of Wales, later Edward VIII, and her father, the Duke of York. The dramatic turn in circumstances came with the abdication of Edward VIII ten years later in 1936, which resulted in her father the Duke of York becoming King George VI and she therefore heir presumptive to the Crown. A photograph taken of the house at around the time that the baby princess was born, was reproduced in the publication, ‘Queen Elizabeth II: A Birthday Souvenir Album’ in 2006. The websource ‘London Remembers’ lists the property as having belonged to the Earl and Countess of Strathmore and Kinghorne since 1920 but the date of its demolition is uncertain. It suffered a similar fate to other houses around the Berkeley Square area which were damaged by bombing during the Blitz. Of interest however, is the fact that Lady Elizabeth Bowes-Lyon set out from 17 Bruton Street, her London family home, to marry the Duke of York on 26 April 1923. An image of Lady Elizabeth Bowes-Lyon leaving 17 Bruton Street, exists in the Royal Photograph Collection, showing her in her wedding dress, described in The Times as “the simplest ever made for a royal wedding”.

A little known letter, written by Prince Albert, Duke of York [future George VI] to Princess Louise, Duchess of Argyll, is preserved in the Royal Archives at Windsor. It was written from 17 Bruton Street two days after the birth of the Princess Elizabeth and was penned by the Duke of York in response to a letter written by Princess Louise on the birth of the baby princess. The following extract offers us a unique and privileged glimpse of the little Princess Elizabeth, two days old: ‘It was too nice of you to have written to me and I do thank you so much for congratulating us on our little girl. She is too delicious and is such a great joy to us both. Elizabeth [the Duchess of York] is progressing wonderfully well and the baby is flourishing. I do hope you will come in later and see your new niece, a great great niece...’ (cit., Elizabeth Longford, Darling Loosy, Letters to Princess Louise, 1859-1939, 297).

The christening of Princess Elizabeth Alexandra Mary took place on 29 May 1926 in the private chapel at Buckingham Palace and was conducted by the Archbishop of York, Cosmo Gordon Lang. Her godparents were her aunt Lady Elphinstone, the Duke of Connaught, Queen Mary and King George V, the Earl of Strathmore and Princess Mary Viscountess Lascelles. She was christened after her paternal great-grandmother Queen Alexandra and her paternal grandmother, Queen Mary. She received her first name after her mother, the Duchess of York.  After the christening, a group portrait was made, showing the Duchess of York holding the baby Princess Elizabeth in her long lace christening gown; it was the same christening robe made of Honiton lace and satin which had been used for Queen Victoria’s eldest daughter, the Princess Royal, in 1841 and continued to be worn at subsequent royal christenings.

The former 17 Bruton Street is now the site of a high quality Cantonese restaurant, the Haakasan. A plaque to record the birth of HM The Queen was placed on the site of the house by the City of Westminster in 2012, the year of the Diamond Jubilee. It reads: “On this site at 17 Bruton Street stood the townhouse of the Earl of Strathmore and Kinghorne where Elizabeth Alexandra Mary Windsor, later to become Her Majesty Queen Elizabeth II was born on 21 April 1926”. It joins an earlier one which was placed at the site in 1977, in the year of the Silver Jubilee.