Milestones of a Monarch: The Queen addresses US Congress 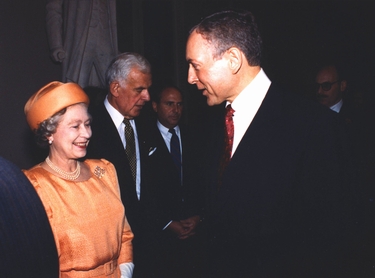 The Queen and Prince Philip paid a state visit to the United States from 14-26 May 1991, visiting Washington, Arlington, Baltimore, Miami, Austin, San Antonio, Dallas, and Houston over the nearly-two-week visit.

On 16 May 1991, The Queen, accompanied by the Duke of Edinburgh, arrived at the Chamber of the House of Representatives for her 15-minute speech to a Joint Session of Congress.

A joint session of Congress is when both chambers of the US Legislature, the Senate and the House of Representatives, meet. These sessions can be called at any time, but are most notably held when the sitting President delivers the State of the Union address.

To open her speech, The Queen made a reference to an earlier appearance at the White House, where her person had been dwarfed by the microphones assembled in front of her and the tall hat covering her head. “I do hope you can see me today from where you are,” she said, to thunderous laughter.

The Queen continued, “Some people believe that power grows from the barrel of a gun. So it can, but history shows that it never grows well nor for very long. Force, in the end, is sterile. We have gone a better way; our societies rest on mutual agreement, on contract and on consensus. A significant part of your Social Contract is written down in your Constitution. Ours rests on customs and will. The spirit behind both, however, is precisely the same. It is the spirit of democracy.”

The Queen also spoke of the Gulf War, which had ended on 28 February of that year, saying that the responses of the UK and the US were identical and said: “That response was not without risk, but we have both learned from history that we must not allow oppression to succeed.”  The Queen then paid tribute to President George H.W. Bush for his leadership during the Gulf War.

She also spoke of how the UK and the US were poised to lead global change by virtue of their “rich ethnic and cultural diversity of both our societies.” She continued, “Perhaps we can, together, build on our experience to spread the message we have learned at home to those regions where it has yet to be absorbed.”

The Queen, dressed in a pale orange dress and hat, spoke in front of more than 800 people according to Capitol Police. Other world leaders who have spoken to Congress include Queen Juliana of the Netherlands, who spoke in 1952; UK Prime Minister Winston Churchill in 1941, 1943, and 1952; Pope Francis in 2013; and Ukrainian President Volodymyr Zelenskyy in March 2022.