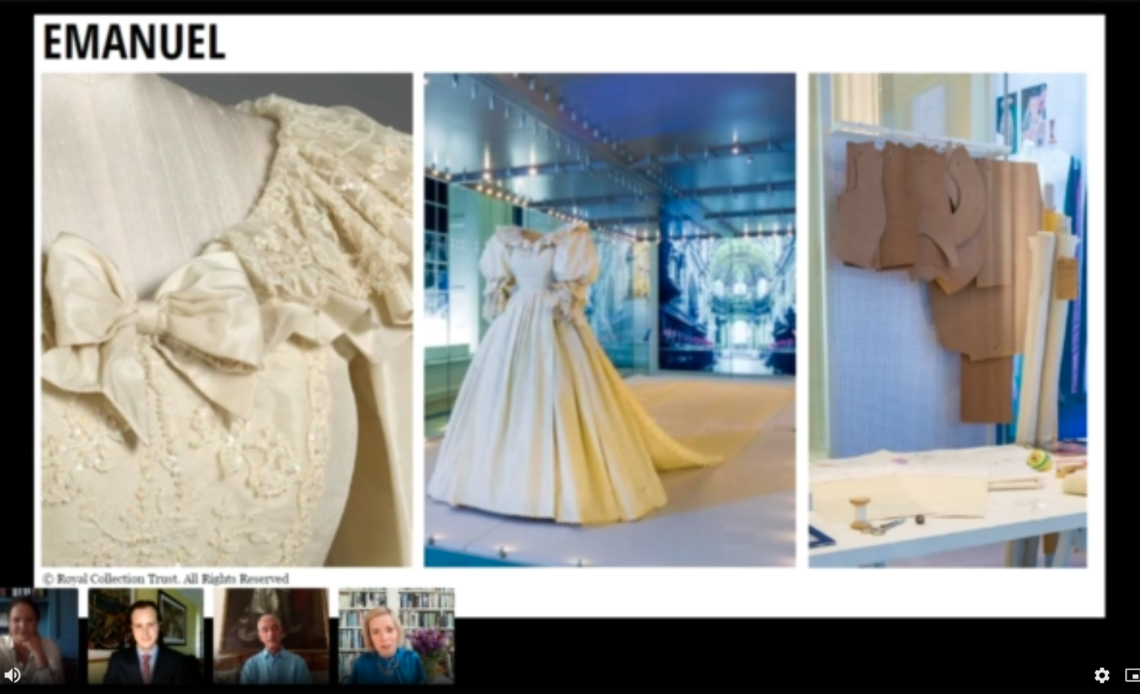 On Wednesday 9 June, Historic Royal Palaces held an online talk in conjunction with their new exhibition, Royal Style in the Making. The talk highlighted the five garments included in the exhibition and behind the scenes and historical information about royal fashion.

Co-Chief Curator for Historic Royal Palaces, Lucy Worsley, hosted the talk, where curator Matthew Storey, designer David Sassoon, and Harper’s Bazaar editor Lydia Slater discussed the garments showcased in Royal Style, gave their opinions on royal fashion choices, and talked about the impact that royals have both on designers and the journalists that cover them.

The five garments included in the exhibition are: a toile of Queen Elizabeth’s (later the Queen Mother) 1937 coronation dress by Madame Handley-Seymour, a previously unseen black Norman Hartnell evening gown from the Queen Mother, Princess Margaret’s 1964 Oliver Messel gown worn for a costume ball in aid of St. John’s Ambulance, a 1981 Belville Sassoon dress that Diana, Princess of Wales wore to leave on her honeymoon, and her 1981 iconic wedding dress, designed by the Emanuels.

Sassoon discussed his experiences designing for royal clients. He has designed for several different royals including Diana, Princess Margaret, and the Queen Mother. He said that while Diana had an unfortunate first visit to his studio, the designer and young woman made a connection at her next visit, and she commissioned him to make ten items for her trousseau. His close relationship with Diana is evidenced by his sketches and letters with her in the archives at Kensington Palace.

Slater discussed the impact of the Royal Family on British fashion, stating that they are “wonderful ambassadors, conscientiously”. She praised both the Duchess of Cambridge and the Duchess of Sussex’s wedding dresses for highlighting British talent. Slater also said the Diana “was a godsend to fashion journalists and was absolutely brilliant at communicating with her clothes” so that journalists could easily decode her fashion.

There is no doubt that many people will be queuing to see Diana’s wedding gown and to celebrate what would have been her 60th birthday.