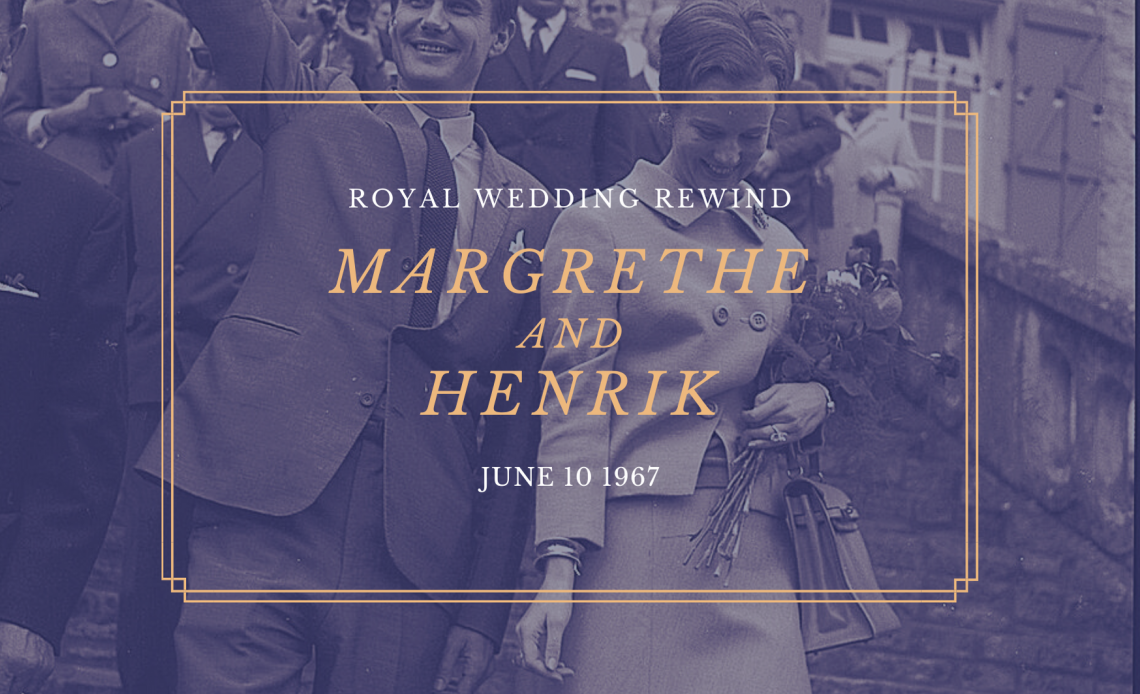 By André Cros - This photograph is part of the Fonds André Cros, preserved by the city archives of Toulouse and released under CC BY-SA 4.0 license by the deliberation n°27.3 of June 23rd, 2017 of the Town Council of the City of Toulouse., CC BY-SA 4.0, Wiki Commons

On 4 October 1966, the Danish Royal Court announced that Crown Princess Margrethe was to marry Henri de Laborde de Montpezat. The engagement was a surprise to most as they had kept their relationship a secret. Henri was a French diplomat in London, and he and Margrethe met during an official dinner at the French Embassy and then again at a wedding, starting a relationship soon afterwards.

Henri gave Margrethe a Van Cleef and Arpels engagement ring featuring two large square cut diamonds set at a diagonal. When the engagement was announced, Henri was not yet living in Denmark, and he did not move entirely to Copenhagen until the end of May 1967, shortly before the wedding.

After Henri’s arrival in Copenhagen at the end of May, the engaged couple attended several events and receptions hosted by the government, Copenhagen Municipality and the bride-to-be’s parents King Frederik and Queen Ingrid. Plans were also made to televise the wedding in Denmark but also in foreign countries such as in France, Norway and Sweden among others.

Crown Princess Margrethe and Henri de Laborde de Montpezat married on 10 June 1967 in the Holmen Church in Copenhagen. The wedding ceremony lasted 20 minutes as Margrethe wished her wedding to be no different than any other Danish marriage. To fulfil this wish, Henri also said his vows in Danish.

Margrethe’s wedding dress was designed by Danish dressmaker Jorgen Bender. It featured a silk long sleeve gown with a 6.096-metre silk train. The lace on the bodice was an heirloom lace belonging to her grandmother, Princess Margaret of Connaught, the former Crown Princess of Sweden.

She also wore a daisy brooch on the front of her dress, belonging to her mother Queen Ingrid, and she chose to wear the Khedive of Egypt tiara. Both the brooch and the tiara were worn by Queen Ingrid on her wedding day, too. As another nod to her and her grandmother’s nickname, Margrethe’s bouquet was made of daisies.

After the wedding ceremony, the couple appeared on Amalienborg Palace’s balcony. King Frederik thanked everyone who came to celebrate, and Margrethe seemed to be very moved. King Frederik and Queen Ingrid then hosted a garden reception for 400 guests before hosting an evening reception.

One notable absence was the one of Margrethe’s sister Queen Anne-Marie of Greece and her husband, King Constantine.

In the early stages of the wedding planning, it was decided that the wedding would take place on 25 May 1967, but it was quickly postponed because of Anne-Marie’s pregnancy at the time (Crown Prince Pavlos was born on 20 May). In the end, Queen Anne-Marie was still unable to attend the wedding. There had been a coup d’état in Greece, and King Constantine and Queen Anne-Marie were forced into exile. Thus, the Danish government did not want them to come to Denmark.

Following the wedding, Henri adopted the Danish writing of his first name and became His Royal Highness Prince Henrik of Denmark. He also converted into the Danish church from Roman Catholicism and received the Order of the Elephant, the highest Danish order.

In 1972, Margrethe became Queen of Denmark after the death of her father King Frederik, but it wasn’t until 2005 that Prince Henrik was styled Henrik, The Prince Consort of Denmark. He later reverted to the style of Prince Henrik in 2016.

Queen Margrethe and Prince Henrik have two children: Crown Prince Frederik and Prince Joachim. They also have eight grandchildren. They were married for almost 51 years until Prince Henrik’s death on 13 February 2018.

Royal Central has a new anthology about royal weddings out now. Royal Weddings, A Collection is on sale as a paperback and an ebook at Amazon.