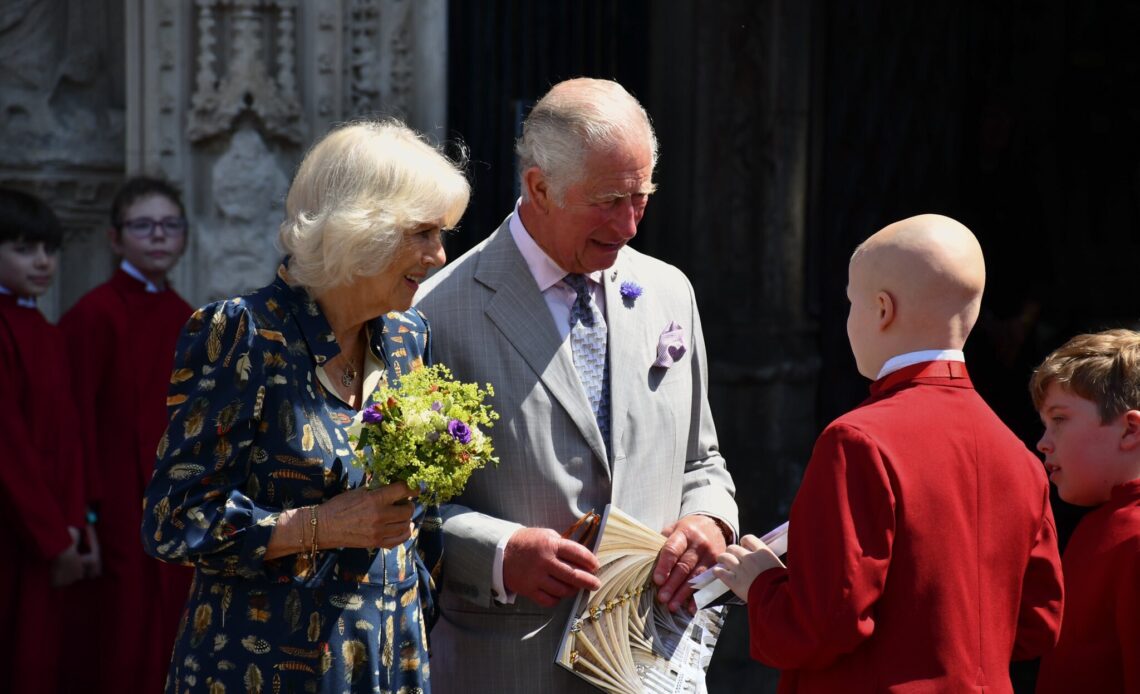 The Prince of Wales and the Duchess of Cornwall began their annual three-day visit to Devon and Cornwall on Monday with a visit to Exeter Cathedral.

There, the royals met with community groups at the heart of Exeter’s society including the Devon Wildlife Trust and Parklife Heavitree—who met with Prince Charles—and the Exeter City Community Trust who met with Camilla.

The royals learned how these groups support their communities and how they provided services during the global pandemic, with Camilla learning more about the support provided to the homeless population of Exeter. They also met with representatives from the National Health Service.

After meeting with the community groups, Prince Charles and the Duchess were given a tour of the Exeter Cathedral by the Bishop of Exeter, the Right Reverend Robert Atwell, and the Dean of Exeter, the Very Reverend Jonathan Greener.

“It was a fantastic visit and special in all sorts of ways, which was reflected by the hundreds of people who came,” said Bishop Robert in a blog post on the Cathedral’s website. “[Prince Charles] engaged really well with all sorts of people. He is hugely interested in our cathedral and its significance in terms of architecture and heritage and conservation.

“But he was also interested in the local community groups – it was wonderful seeing him and Camilla talking to people like the cathedral stonemasons and Prince of Wales nursing cadets.

“He was also concerned to hear how we had fared in Devon during the pandemic and how young people are experiencing things because it has been so challenging.”

During their tour of the Cathedral, the royals were shown artefacts including the Exeter Book, which may be one of the oldest surviving books of English literature, and medieval misericords in the Quire.

Exeter has this year been designated as a UNESCO City of Literature, and Camilla later spoke with the group to learn more about the literary history of the city and how the city promotes literacy to young people.

Prince Charles, who is patron of the Cathedral’s charity appeal, also spoke with donors and fundraisers to hear about their successes. He also met with staff from the Met Office who are working on climate change research with the Cathedral; with a Devon-based group who is contributing to the upcoming Green Canopy initiative for The Queen’s Platinum Jubilee next year; and with Devon Nursing Cadets to formally launch the Royal College of Nursing Prince of Wales Nursing Cadet Scheme.

The Royal College of Nursing Prince of Wales Nursing Cadet Scheme provides nursing students with a chance to explore what a career in nursing actually means and supports nursing cadets as they build the skills to gain employment upon graduation.

Reverend Greener said of the royal visit: “As a Cathedral, a city and a county, we have endured an incredibly challenging 16 months. So, to receive the first royal visit since the easing of coronavirus restrictions is a wonderful way to lift the spirits of the whole community, and move forward in hope.”

After their visit inside Exeter Cathedral, Prince Charles and Camilla took an impromptu walkabout to meet the crowds outside. The Duchess of Cornwall expressed to some in the crowd that she hoped that the worst of the pandemic is behind us, though she told one NHS worker about her reservations toward a few pre-pandemic social cues.

Speaking to The Telegraph, Tuesday Masding, a carer with the NHS said about her conversation with Camilla: “We were just discussing the relaxation of rules and how she hasn’t quite got around to shaking hands with people, and I said that’s probably an appropriate reaction.”

Prince Charles then travelled to the Exeter Bus Station to learn more about the city’s ‘Net Zero Heroes’ who are working to achieve net zero carbon emissions by 2030. There, Charles met with transportation workers, members of City Council who enacted the net zero plan, and long-time bus drivers who told him about their work throughout the pandemic.

During his visit, Prince Charles toured a vintage bus, unveiled a plaque to commemorate his visit and learned more about the construction work on St. Sidwell’s Leisure Centre, which is near the bus station and will work to provide social programs to local residents through a pilot project with Sport England.

According to Clarence House, St. Sidwell’s will be the “UK’s first Passivhaus standard ultra-low carbon leisure centre, designed to save up to 70% on annual energy consumption and climate change proof for the next 80 years.”

Meanwhile, Camilla paid a visit to the Weaver Green showroom located at Heron Valley Orchards to learn more about the company’s practices in creating housewares from recycled plastics.

Weaver Green wrote on its Facebook page after the visit: “We were honoured to welcome The Duchess of Cornwall today and show her around our new Weaver Green store and showroom. Having used our products before at Clarence House she was interested to learn the process and how we have turned 160 million plastic bottles in to beautiful and practical home textiles. She met the team and the family and we all had a wonderful day in Devon sunshine showing her the range and celebrating our new space.”

Prince Charles and the Duchess of Cornwall will continue their visit to Devon and Cornwall through Wednesday.