The iconic outfit from The Queen’s Silver Jubilee 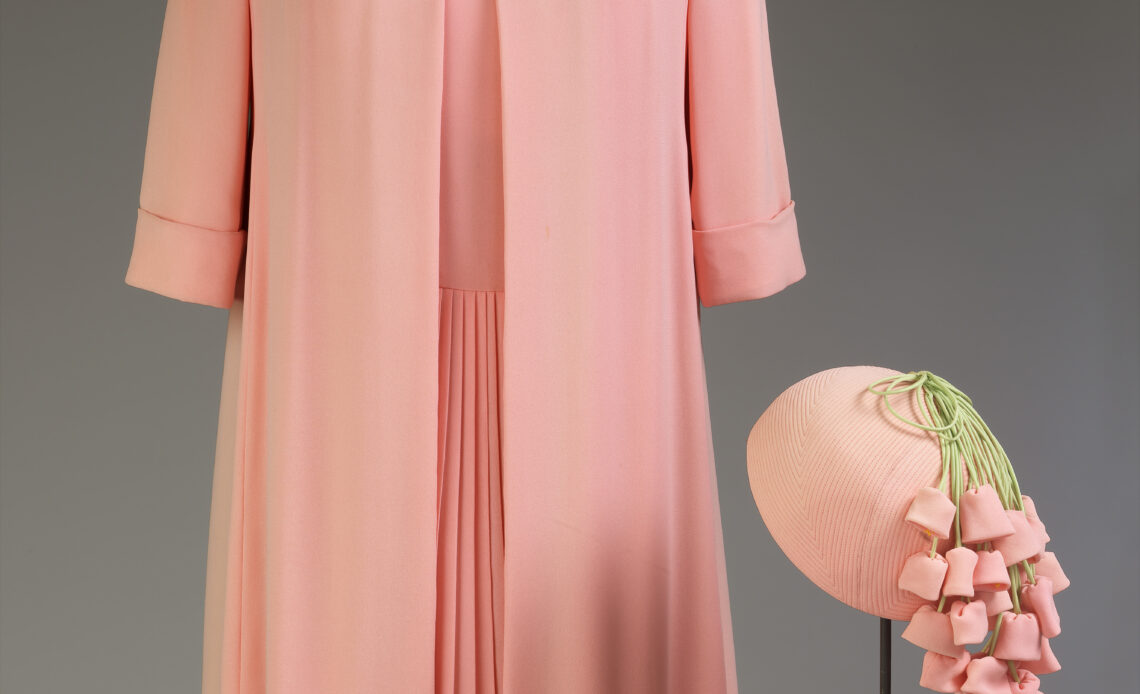 Outfits worn by The Queen to mark her Silver, Gold, and Diamond Jubilees will be on display at the Palace of Holyroodhouse in Scotland next year, and one of The Queen’s most iconic and divisive looks will feature prominently.

The Platinum Jubilee Display will display The Queen’s Silver Jubilee dress and hat as part of the upcoming display. The bubble-gum pink dress was designed by one of The Queen’s favourite dressmakers, Hardy Amies, for the Service of Thanksgiving held at St Paul’s Cathedral on 7 June 1977.

According to the Royal Collection Trust website, “Sir Hardy Amies designed a striking ensemble of dress, coat and stole in pink silk crepe and chiffon with a matching hat designed by Simone Mirman with flowerheads hanging from silk stems.”

In an earlier exhibition to mark The Queen’s 90th birthday, the Royal Collection Trust noted that the accompanying hat had been “applied with stylised flowerheads which hang freely from 803 silk stems.”

Amies began working as a couturier for The Queen in 1950, back when she was still Princess Elizabeth, when he designed clothes for her 1951 visit to Canada. In 1955, he was rewarded by being named as one of her three official dressmakers, and he later said in an interview, about The Queen’s style, “The Queen’s attitude is that she must always dress for the occasion.”

Amies retired his Royal Warrant in 1990 to give other designers a chance, but his fashion house continued to design for The Queen—under a new director—until 2002. Amies passed away in 2003.

Simone Mirman began her royal millinery career in 1952, when she was invited to Buckingham Palace to showcase her designs for The Queen, The Queen Mother, and Princess Margaret. She would later receive Royal Warrants from The Queen and The Queen Mother.

Among her iconic hats for The Queen are the Silver Jubilee helmet-style hat, and the Tudor gable-hood inspired hat The Queen wore to the Investiture of Prince Charles as the Prince of Wales.

On 7 June 1977, The New York Times described The Queen’s arrival at St Paul’s Cathedral: “She had ridden there in the magnificent gold state coach, waving to mammoth crowds like a modern Cinderella, accompanied by coachmen and troops and knights in uniforms ablaze with gold and red and black.

“After the service, The Queen, in pink coat, dress and hat, walked among the onlookers, stopping to chat with more than a dozen of those who had stood for hours to catch a glimpse of her.”

In attendance at the Service of Thanksgiving were members of the Royal Family, members of the Order of the Garter, all living former Prime Ministers, and US President Jimmy Carter.

Afterwards, at a reception at Guildhall, The Queen gave a speech, recalling her promise in 1947, as she reached her majority and vowed that, “My whole life, whether it be long or short, shall be devoted to your service and the service of our great imperial family to which we all belong.”

“Although that vow was made ‘in my salad days when I was green in judgment,’ I do not regret or retract one word of it.”

The Platinum Jubilee Display will run from 14 July to 25 September 2022.