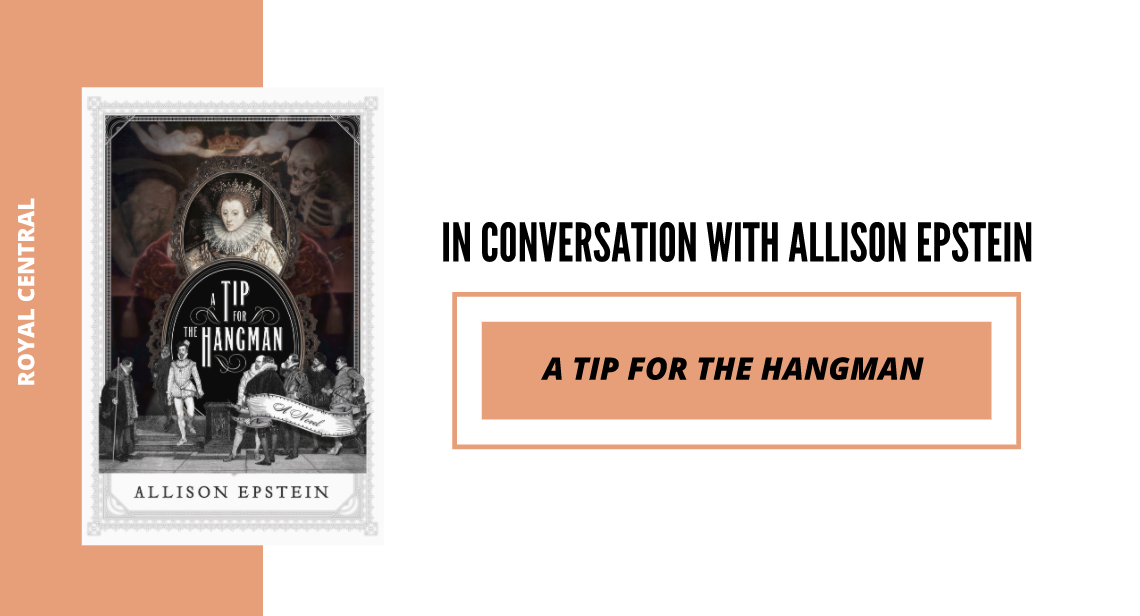 You might know the Elizabethan playwright and poet Christopher “Kit” Marlowe as one of the most famous of Shakespeare’s predecessors, but for centuries Marlowe’s legacy has lived on in another story: that he was a spy for Queen Elizabeth I.

A Tip for the Hangman, a new novel by debut historical author Allison Epstein, explores what could have happened if Marlowe truly had been plucked out of his Cambridge dormitory and placed in the household of Mary, Queen of Scots as a spy.

Released earlier this month, the book follows Kit’s life from university student to spy to famous playwright (then spy again), and how he wrestles with the moral implications of his work in a business where showing weakness is not an option. Combining rich historical details with a fast-paced plot, A Tip for the Hangman takes readers on an exciting and romantic ride through Elizabethan England.

Royal Central spoke with Epstein about her love of all things Elizabethan, why Mary, Queen of Scots gets style points, and what she’s working on next.

Kristin Contino: I think many people would be shocked to know this was your debut novel after reading it! What made you choose Kit’s story and Elizabethan England for your first book?

Allison Epstein: I’ve been an Elizabethan England nerd for a good while, actually! I was a Shakespeare-obsessed English major in college, and I’ll still drag my friends to any production of Hamlet within a twenty-mile radius. So the period itself spoke to me because I’d studied it, but I sort of fell into writing Kit’s story by accident.

I was introduced to Marlowe’s work through a college class and became completely, unintentionally consumed by his biography. It had everything I wanted: Intrigue! Danger! Scandal! Secrets! Theatre! Spies! Maybe Mary, Queen of Scots! Being gay and doing crimes! And the more research I did, the more unanswered questions and possible explanations kept rising up.

From my perspective, Marlowe’s life is a historical fiction writer’s dream: it’s got exactly enough interesting details to ground a novel, and exactly enough mystery to let the writer’s imagination run wild.

Although Mary, Queen of Scots appears in the story while Kit is employed in her household, we never actually see Elizabeth I. Throughout the novel she’s more of a distant, detached figurehead. Did you ever consider involving her as a more direct character?

I did, and in early drafts, I actually tried it! I drafted several scenes of Kit interacting with Elizabeth at court, but they just never seemed to make sense for the book.

After a while, I realized Elizabeth needed to be an offstage power because that’s how her subjects would have perceived her. A commoner like Kit Marlowe would never have come within shouting distance of Queen Elizabeth—he simply wasn’t well-born enough, no matter how important his espionage activities might have been. Her decisions affected every breath her subjects took, but she was a force to them, not a person, and portraying her otherwise felt disingenuous.

If I wanted to explore Elizabeth’s personality, I’d have to do it through the point of view of a character on her level, and that’s another book entirely. (Though I haven’t ruled out writing that book!)

On that note, did you find yourself sympathizing more with Mary’s plight as you wrote the novel since she was a fully-formed character? If you already had a pretty clear Team MQOS/Team Elizabeth stance did that change at all?

I’ve always been pretty firmly Team Mary, Queen of Scots. I love me a schemer, and gosh darn it, Mary Stuart knew how to scheme! There’s a scrappy underdog quality to her story—even though she was born into two wildly powerful families—that I’ve always found easy to root for. And because I did write Mary as a full character, I spent a lot of time thinking through her motivations, which is always the first step to sympathy.

Even so, I can see the difficulty of Elizabeth’s position. Being a female sovereign at the time is an impossible task, and while she made decisions I wouldn’t have made, I’m in no position to judge her. Both Mary and Elizabeth are deeply flawed and dangerous women—and what makes them fascinating is how closely their flaws and cruelties overlap. They were eerily similar in so many ways!

(But only Mary tried to summon the Spanish Armada, which gives her style points in my book.)

Outside of Kit, who did you enjoy writing about the most?

Sir Francis Walsingham, Queen Elizabeth’s spymaster, for sure! It’s so much fun to write a character who’s aggressively competent and has no patience to suffer fools. I also really enjoyed building the relationship between Kit and Walsingham. Their personalities are such polar opposites, and yet they’re both such talented intelligence agents that their grudging respect turns into (almost) affection. It was a complex, twisty dynamic to explore, and I loved every second of it.

Did you travel to the UK to research A Tip for the Hangman? If so, did you have a favourite spot of Kit’s/Elizabeth’s/Mary’s that you visited?

I did, back in the days when we could travel! I wandered through London for several days and saw a play at Shakespeare’s Globe, which was hugely influential for me when writing the theatre-specific scenes. For me, though, my favourite travel spot was Canterbury, where Marlowe grew up. Standing inside Canterbury Cathedral was transformative, if it’s not too dramatic to say that. Looking up at that incredibly ornate, ancient building and thinking about Kit standing in the same place as a child with his brothers and sisters, maybe even on those same stones—it made me feel even closer to him than before.

Can you tell us what you’re working on next?

I’ll keep it vague because things are still a bit up in the air, but I am working on a new novel! It’s set in 19th-century Russia, right at the end of the Napoleonic wars—so if you have any tsarist questions, I’m your girl.

A Tip for the Hangman is available now in hardcover or e-book.