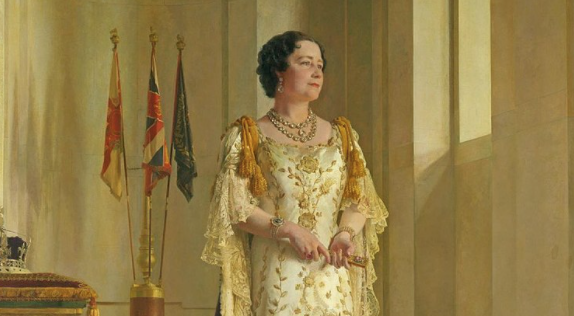 Some royals are fashion trendsetters, like Princess Alexandra (future Queen Alexandra). Others gravitate towards a specific designer or two and work to create styles and a wardrobe that works for them as an individual. The Duchess of York, later Queen Elizabeth, was one of the latter. As we continue with our Fashion Favourite series, we will be looking at Lady Elizabeth Bowes-Lyon and Madame Handley-Seymour.

Lady Elizabeth Angela Marguerite Bowes-Lyon was the second-youngest child and the youngest daughter of Claude Bowes-Lyon, 14th Earl of Strathmore and Kinghorne and Celia Cavendish-Bentinck, and was born on 4 August 1900. (It is unclear where she was born, as her birth was registered quite late.)

Prince Albert, second son of King George V and Queen Mary and known as Bertie, fell for Elizabeth quickly after meeting her and proposed marriage in 1921. She refused him in 1921, and again in 1922 when he proposed after she was a bridesmaid in Princess Mary’s February wedding to Viscount Lascelles. However, when Bertie proposed a third time in January 1923, and Elizabeth finally accepted.

They married on 26 April 1923 at Westminster Abbey, where Elizabeth started the tradition of laying the bridal bouquet on the Tomb of the Unknown Warrior (in honour of her brother Fergus, who died in the First World War). And for her bridal gown, Elizabeth turned to Madame Handley-Seymour – a designer who would dress her for the most important events in her adult life.

Elizabeth Handley-Seymour was born in 1867 in Blackpool and moved to London in the 1890s to be a court-dressmaker. She launched her wider designing business in 1908-1909, and from 1910 on was known as Madame Handley-Seymour. Much of her business was copying the newest Paris designs, a common practice in the industry at the time. She had agreements with several designers, including Paul Poiret, which allowed her to keep up with current trends.

Handley-Seymour was one of Queen Mary’s favourite dressmakers and was commissioned to make Elizabeth’s wedding gown in 1923. While most royal wedding dresses from the twentieth and twenty-first centuries erred on the side of timeless, Elizabeth went with a very contemporary design. The drop-waisted design was very popular in the 1920s. The dress was made of chiffon moire in an ivory colour and featured embroidery with silver thread and pearls and a train made from Flanders’ lace that was a gift from Queen Mary. In addition to the wedding gown, Handley-Seymour also designed the trousseau.

Although Elizabeth had turned to Norman Hartnell in the 1930s, she chose Handley-Seymour to create her coronation gown for the 1937 Coronation. (Norman designed the dresses for the Maids of Honour.) A rare surviving toile of the coronation gown will be on display in Royal Style in the Making, a royal fashion exhibition at Kensington Palace (3 June 2021 to 2 January 2022).