The royal betrothal that made Orkney part of Scotland 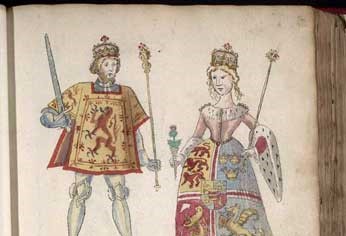 The Duke and Duchess of Cambridge are currently in the middle of a whirlwind tour of Scotland to thank those who have been working on the frontlines during the Covid-19 pandemic and to highlight groups working in environmentalism, mental health and wellness, and homelessness. Known as the Earl and Countess of Strathearn in Scotland, the couple are making their first official trip to the Orkney Islands. The Orkney Islands have not always been considered a part of Scotland; a royal marriage in the fifteenth century changed the Orkney Islands’ fate.

James III, King of Scots, was an unpopular monarch. Like many Scottish rulers, he had a difficult relationship with his extended family. The complex and continually shifting relationships between the Scottish clans were always difficult to navigate, but to do so without their family would be near impossible. He also pursued an English alliance, not a popular choice amongst Scottish nobles. His marriage to Margaret of Denmark was not a particularly happy one, though it did come with some benefits.

Margaret of Denmark was the daughter of Christian I, King of Denmark, Norway, and Sweden. The marriage was a political alliance, as most royal marriages were, but also effectively a payment. Scotland owed a debt to Denmark from the taxation of the Isle of Man and the Hebrides. Margaret’s dowry was set at 80,000 guilders, with the Orkney Islands and the Shetland Islands used as a mortgage against that. When Denmark was unable to pay the full amount, Scotland absorbed the Orkney Islands, which also cleared Scotland’s debt.

At the age of 13 in 1469, Margaret married James at Holyrood Abbey in Edinburgh. In 1673, she gave birth to the future King James IV and would have another two sons. Margaret received the largest jointure allowed by Scottish law at the time. She was a popular queen; she was fashionable, kind, and thoughtful. Many historians agree that she may have been a better ruler than her husband.

The Earl and Countess of Strathearn will visit the European Marine Energy Centre ahead of the COP26 climate conference that is going to be held in Glasgow in November 2021.