A history of royal dining: An interview with antiques expert Steven Moore 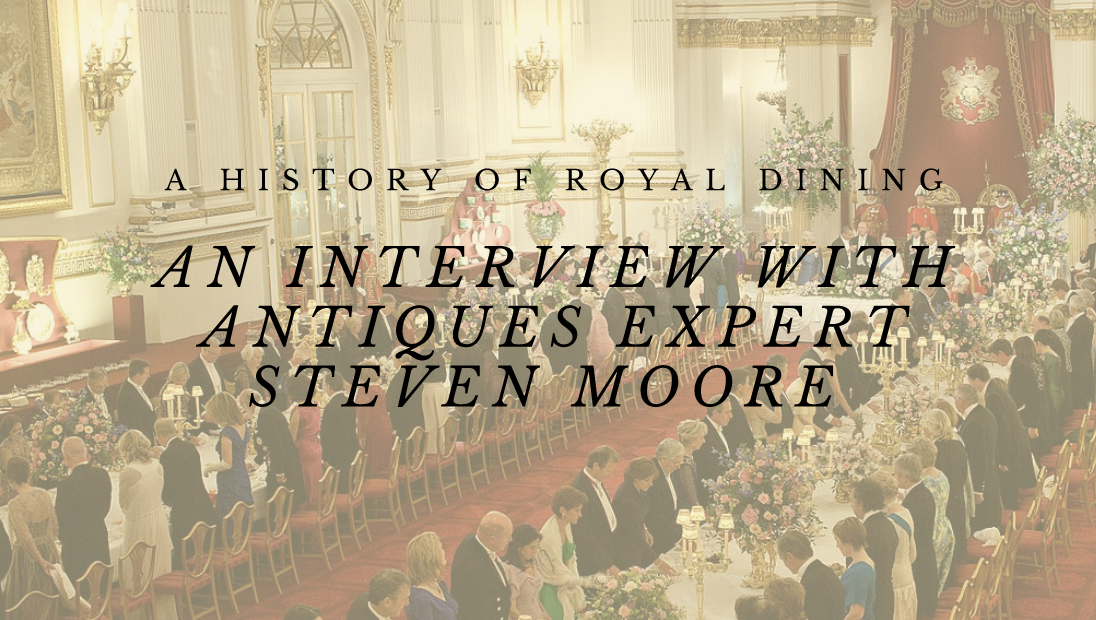 Whether it’s enjoying the YouTube footage of a modern-day state banquet with The Queen or reading about a Tudor feast hosted by Henry VIII, royal dining remains a subject of fascination. Steven Moore, antique expert and historical advisor to The English Manner, recently explored the topic in a webinar covering centuries of royal feasts.

Spanning from medieval times to the current Royal Family, Moore, who is known for BBC’s Antiques Road Show, discussed the rituals and customs carried out during a royal meal. The webinar was hosted by The English Manner, the UK’s leading etiquette and protocol institute, which was founded by a former member of Her Majesty’s household in 2001.

Throughout history, many dining practices, such as eating with one’s hands, have changed quite a bit. But when it comes to an institution that thrives on tradition, it’s perhaps unsurprising that many aspects of royal dining have stayed the same.

Some customs, like the monarch sitting at a high table (as you might see at a modern-day wedding) with a cloth of honour behind, are still in practice today.

However, you wouldn’t see a food taster and The Queen’s doctor standing by that same table, while hundreds of years ago, that would very much be the standard. The monarch’s doctor would be present at a meal in order to suggest which foods should or shouldn’t be eaten in accordance with any health concerns.

“Food was seen as very much the way you looked after your body and health,” Moore said, explaining that different foods were said to affect different humours, and if you had an imbalance of humours, that was thought to be what made you ill.

Another change we see in today’s royal meals is that state banquets and other formal dinners are evening occasions, whereas they used to be held during the day.

“Right until the 18th century, it was still a meal taken in the middle of the day,” Moore said, with dinner coming from an old French word meaning to break your fast. “People in royal and aristocratic circles wouldn’t rise until maybe 11 a.m., and dinner at noon was the most lavish meal of the day.”

When discussing a painting of a meal during Queen Victoria’s time, Moore pointed out that candles were present on the table “because dinner has been moved to the evening now. It got progressively later as we moved through the 18th century, and then in the 19th century they had to invent lunch because people were getting hungry during the day.”

One royal dining tradition that has stood the test of time is the use of The Grand Service, purchased by George IV. This silver-gilt dining service includes more than 4,000 items and is still used today by the Royal Family, although Moore said the pieces are re-gilded from time to time.

Another lasting tradition is that one footman is present for each guest at a royal banquet. “Anyone who has watched Downton can relate to the shock and horror when they had to go down to one footman,” Moore said. Since the Royal Household doesn’t employ enough footmen to serve every guest for larger occasions, they rely on temporary help.

“For state banquets, they bring people in to act as footmen,” Moore said, adding that “some of the livery they wear are 200 years old, and you’re chosen not just for your skill, but also if you fit the livery.”

Royal Central spoke with Moore following the webinar to gain some additional insight into royal dining through the centuries.

Kristin Contino: What has changed through the years in terms of the types of food served at royal banquets? For example, what would be served for the main course in Henry VIII’s time versus today?

Steven Moore: Tudor food was much more about a display of wealth and status, so food was selected to reflect this. Think roast dolphin, peacock or sturgeon. Even today, all sturgeon found in UK waters are deemed property of the monarch.

In the webinar, you discussed how a white tablecloth was very expensive in the Middle Ages. White tablecloths are still widely used at royal banquets today, but has there been any kind of shift in terms of the type of royal table linens used throughout history? Is there a specific type/brand of table linens that the royal household uses today?

Historically, the best table linens came from Italy, but from the late 17th Century, Irish linens were favoured by the Royal Family and (I should imagine) it will be late Victorian or Edwardian Irish damask linens used today.

Throughout history, what has the protocol been in terms of the monarch eating? For example, if he/she didn’t touch the food, would other guests have been able to eat their meals?

In the old style of dining (known as ‘Service a la Francaise’), the monarch sat at the High Table would be served before the guests, indicating which foods they wished to eat from a wide range of items set before them. The ‘rejected’ dishes would then be served to the other guests as ‘Messes’, a communal plate to share between two or four diners. When dining changed to the modern style (‘Service a la Russe’) circa 1860, and everyone was served food at the same time, it was seen as bad form to eat before – or indeed after the monarch.

Queen Victoria was famous for eating quickly! Historically it was also considered polite to leave some food on the plate. This is not the case today.

You talked about seating arrangements in the webinar, but can you expand a bit on how seating at royal banquets was arranged to show favour (or lack of) to certain people?

It’s complicated. Generally speaking, proximity to the monarch indicates higher status/favour; being ‘sat below the salt’ meant that you were not on the High Table and therefore sat ‘below’ the Salt of State, which was placed before the monarch. Today things are more egalitarian, and seating at a State Banquet tends to be more spread out. At Buckingham Palace, where there is a High Table, it will consist of the monarch, senior guest and guest’s partner, and the most senior royals. The two spur tables will have a mixture of lesser royals (i.e none of ‘The Six’) with a mixture of ministers, diplomats and notable nationals of the nation being honoured.

At Windsor, a single table is used, and Her Majesty The Queen sits in the centre, flanked in the same order of placement as if this was the traditional ‘High Table.’