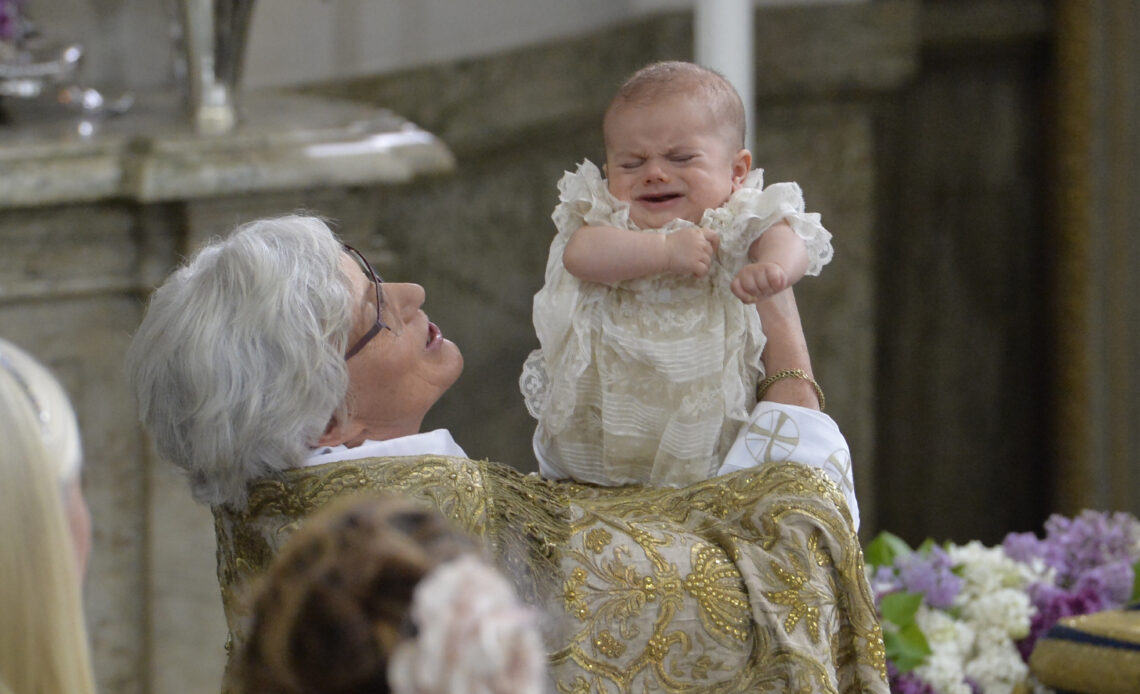 Princess Estelle Silvia Ewa Mary, Duchess of Östergötland, was born on 23 February 2012 to Crown Princess Victoria and Prince Daniel of Sweden. Her christening into the Lutheran faith took place on 22 May 2012 in the Royal Chapel of the Royal Palace of Stockholm (also called Stockholm Palace). As a future Queen of Sweden, her godparents included family and other future monarchs. They were named as then-Prince of Orange (now King Willem-Alexander of the Netherlands); Crown Princess Mary of Denmark (who will become queen consort when her husband, Crown Prince Frederik ascends the throne); Crown Prince Haakon of Norway (the future King of Norway); Prince Carl Philip of Sweden (her maternal uncle); and Anna Westling-Söderström (her paternal aunt).

The Crown Princess and Prince Daniel had a laugh at little Estelle’s yawning as the ceremony was beginning, and later, Crown Princess Victoria read a prayer. Prince Carl Philip poured the water into the baptism font before Estelle was officially christened by Archbishop Anders Wejryd.

The guests from the christening attended a reception at the Royal Palace, hosted by King Carl XVI Gustaf and Queen Silvia. Crown Princess Victoria and Prince Daniel greeted their guests, while Estelle (and later Oscar) rested nearby in Karl XI’s cradle. In a break with tradition, both Sofia Hellqvist (now Princess Sofia) and Chris O’Neill were invited as the partners of Prince Carl Philip and Princess Madeleine, respectively.

Estelle’s christening can be viewed here.

The christening, performed by Archbishop Antje Jackelén, had plenty of laughs, as Princess Leonore could not sit still in her chair and flipped it backwards and fell on the floor as the soloist was performing. Her little brother, Prince Nicolas was distracted sitting by his aunt, Princess Sofia by chewing on a toothbrush. Estelle poured the baptism water into the font and was helped by her aunt, Princess Madeleine. Little Leonore did not like being left out, so Crown Princess Victoria picked up her niece and held her at the baptism font while the water was being poured.

After his christening, he appeared with his family and godparents before the press and assembled crowds outside the Royal Chapel. One reporter asked Princess Estelle about the christening, and ever the professional, she responded, “It went well.” You can watch clips from the christening here.

Like their grandfather, mother, aunt, uncle and cousins, they both wore the Swedish Royal Family’s antique christening gown; it was first worn in 1906 by the future King Gustaf VI Adolph. Their names and the dates of their christenings were embroidered on the gown after the ceremonies. As is the tradition, both were presented with their Order of the Seraphim by the King, but they will not wear it again until they are 18.

Both baptisms were televised live on SVT.