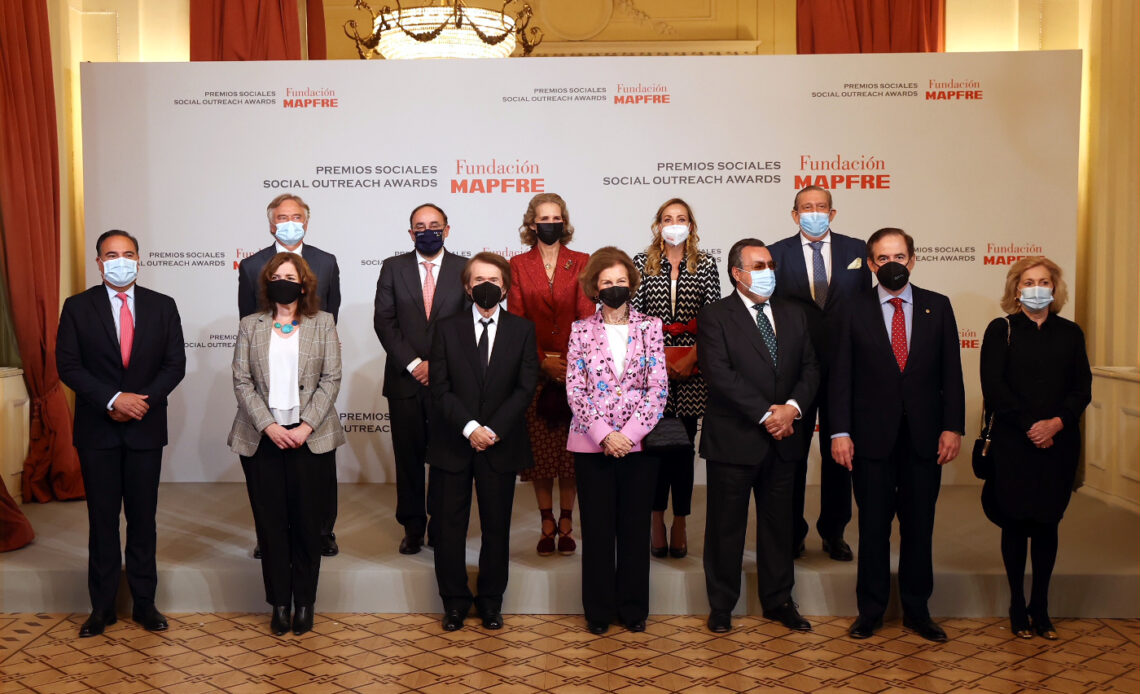 Dressed in a bubblegum pink floral jacket that slightly resembled a croupier’s outfit, Queen Sofía of Spain arrived at Madrid’s Casino on Wednesday, 6 October, to hand out the MAPFRE Foundation’s prizes.

Upon arrival, Her Majesty was reunited with her eldest daughter, Infanta Elena, Duchess of Lugo, the Director of the Social Action sector of the foundation.

Queen Sofía was also welcomed by the Secretary General of the Objectives and Policies of Inclusion and Social Provision Milagros Paniagua and the President of the MAPFRE group and its Foundation Antonio Huertas.

Her Majesty then entered the Royal Hall, where she took her seat in the presidency table, from where she declared the act open and handed out the prizes. A video preceded each award about the winner.

The MAPFRE Foundation awards prizes in four categories, all of which recognise the efforts of people, entities or projects that help in building a more equal and less unjust society.

The first category is called “A whole professional life Jose Manuel Martínez Martínez,” and the award was assigned to Rafael Martos, known as Raphael, a Spanish pop singer who was chosen because of his work on the community around him and the use of his global voice to help the most vulnerable. The Royal House notes that the decision for this prize was unanimous.

The second category is called “To the best entity for its social trajectory,” and the prize was awarded to ONCE Social Group, an entity that takes care of blind people and their inclusion in society. Over the last decade, they have expanded their work globally thanks to their convention with the United Nations’s programme on Human Rights for People with Disabilities.

The third category is called “Prize to the best project or initiative for its social impact,” and this award was granted to Juanfe Foundation, dedicated to helping teenage mothers get out of poverty. The programme, which aims to make young mothers independent through psychological support and education, has been implemented in several countries in Latin America, the latest of which is Mexico.

The fourth and final category is called the “10th international prize of insurance Julio Castelo Matrán,” and the prize was awarded to dr Abel Veiga, Professor of Insurance Law and Commerce Law at Comillas Pontifical University. The award was granted because of the paper he authored, called “Insurance and technology, The impact of digitalisation on insurance contracts,” in which he details the challenges of the insurance world transitioning to digital and also the opportunities this change has brought on.

After handing out prizes, Queen Sofía moved to the Alcalá Hall, where she held a photo opportunity with the prize recipients before meeting briefly with the winners, authorities and participants present in the Casino’s court before leaving.

Queen Sofía has always been very involved with the inclusive development of society towards its most vulnerable members, including people with financial troubles, people with disabilities and minorities.