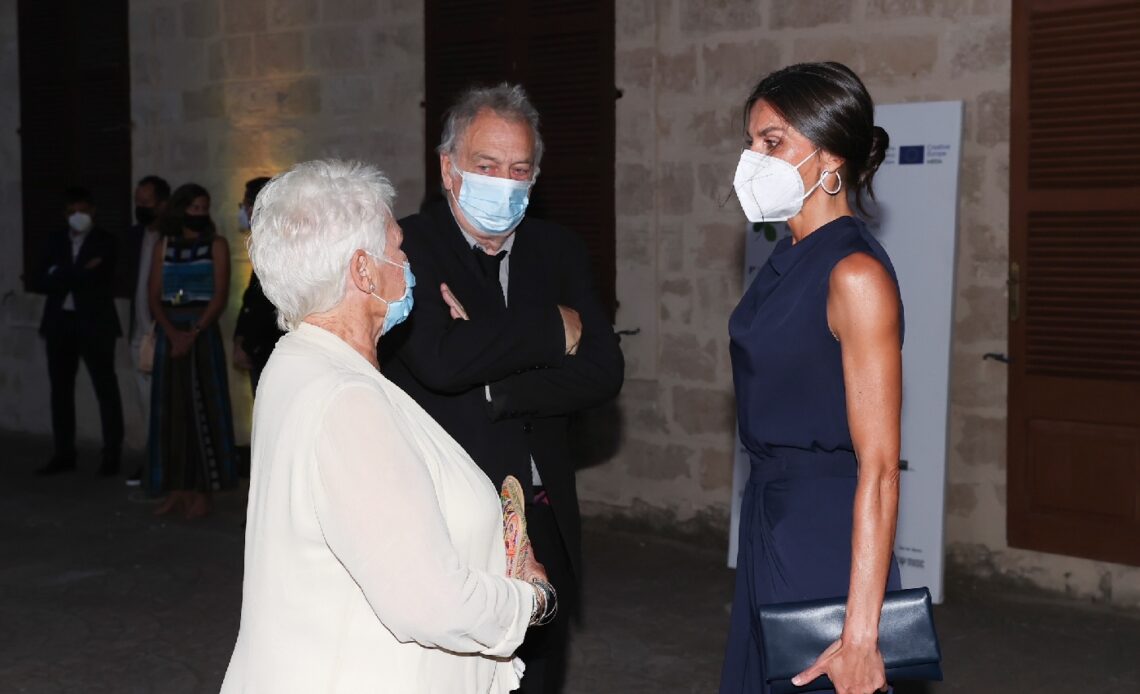 On Sunday, Queen Letizia of Spain gave the start to the family’s agenda in Palma de Mallorca, where the royals are spending a few days for their traditional holiday.

In the evening, the Queen arrived in the central court of Casa de La Misericordia, where the closing ceremony for the Atlántida Mallorca Film Fest 2021 was taking place. The event started with a photo opportunity for guests, in a reduced number compared to past editions of the event due to health safety measures.

But the main event of the night was the handing out of prizes. Her Majesty was in charge of awarding the Masters of Cinema Awards to actress Dame Judi Dench and director Stephen Frears.

It was with the first one that even from far away, the press could pick up an instant connection. Even during the photo session during the award ceremony, Queen Letizia and Dame Judi Dench were seen immersed in what looked like a friendly and animated conversation.

The Spanish royal makes no secret of her love for film and filmmaking, having visited several cinematographic sets for all of the most famous movies and TV shows that are filmed in Spain, as well as Spanish productions abroad. She and King Felipe are also frequent visitors to movie theatres in Madrid, where they often prefer watching movies in their original language rather than in their Spanish translation.

Dame Judi Dench is one of Britain’s most prolific actresses, with her career having been honoured with an Oscar, a Tony, four BAFTAs, seven Lawrence Olivier Awards and many, many more. She was made a Dame Commander of the Order of the British Empire in 1988 and a member of the Order of the Companions of Honour in 2005.

Both women were seen sporting face masks and standing at an appropriate distance, but that did not make their conversation any less animated.

The Spanish royal’s agenda in Palma will continue with a visit to a nature sanctuary on Wednesday and the King competing in the final race of the King’s Sailing Cup on Saturday.