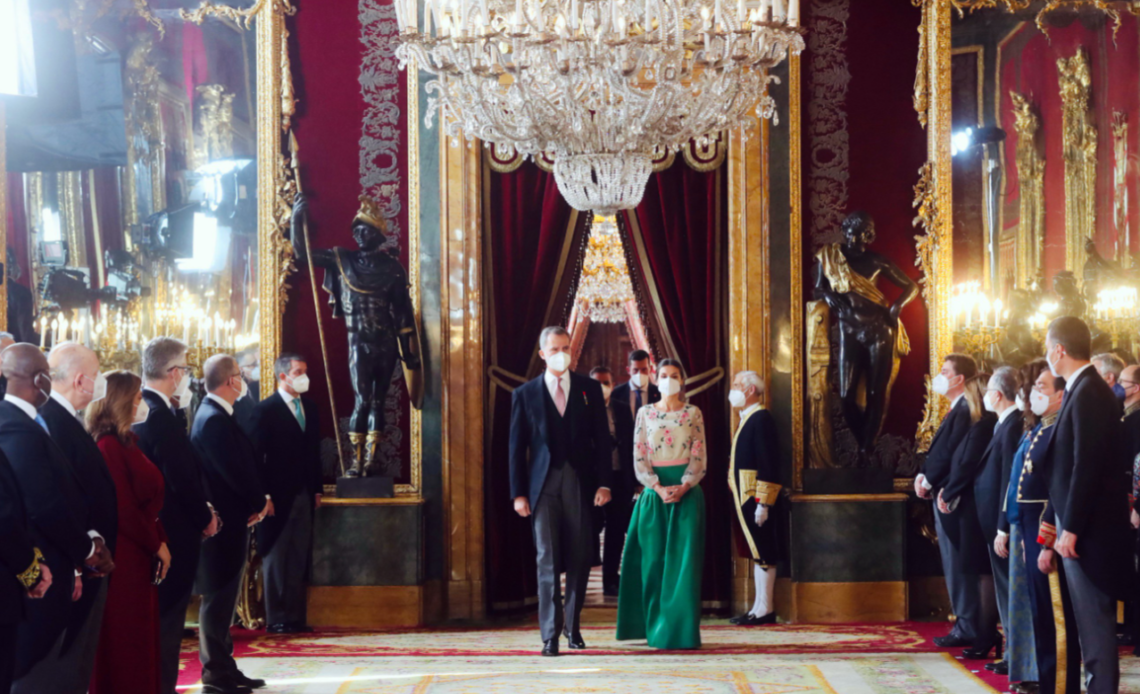 Following the reception of military personnel in the traditional Pascua Militar ceremony, King Felipe and Queen Letizia continued carrying out their new year receptions with the Diplomatic Corpse.

On Monday, 17th January 2022, Their Majesties arrived at Madrid’s Royal Palace to welcome a variety of people involved in the diplomatic efforts of the country.

The Monarch and his spouse stood in the Small Gasparini Room while a Palace employee read out loud the names and roles of the people entering the hall and saluting the Sovereigns.

Following the reception line, the King and Queen reached the Throne Room, where the diplomatic corps was waiting, standing in front of the thrones, while the political authorities, headed by Prime Minister Pedro Sanchez and the Minister of Foreign Affairs, International Cooperation and European Union, stood to the left of the Royals.

The Apostolic Nuncio was then given faculty to speak, as the Dean of the Diplomatic Corps, and he began his speech by wishing his colleagues, authorities and the Monarchs a happy new year. He went on to touch on the role diplomacy played in both Spanish and global crises, such as the pandemic, the vocalic eruption of La Palma or the refugee crisis that the world experienced following the fall of Afghanistan to the Taliban. He concluded his speech by reminding those present about the necessity for peace in the world, and that such peace can only be achieved through diplomatic dialogue.

It was then King Felipe’s turn to speak, and His Majesty touched upon a wide variety of topics, many of which were the same the Apostolic Nuncio had laid out previously: the refugee crisis, the evacuation of Afghanistan, the pandemic. However, the Sovereign highlighted the importance of cooperation to move international talks about these subjects forward.

The King also praised his wife’s relentless work in promoting international cooperation and equal access to basic necessities throughout the globe; such necessities include equal education for boys and girls, and the guarantee of human rights for women. The King expressed his delight at Madrid hosting an international summit on this topic.

King Felipe also reiterated Spain’s commitment to various causes, such as the fight against terrorism, both in Asia and in Africa, the support of emerging countries and democracies in summits where the two counterparts sit as equals, and the various alliances and unions of which Spain is a part, like NATO, the EU and the Latin America summits.

His Majesty concluded his speech with a strong warning to Russia, a nation in the eye of the storm at the moment: while he portrayed the nation as essential in the stability of the Euro-Asian region, he also warned that Spain will always stand together with nations defending their territorial integrity, a clear reference to the mounting tensions between Russia and Ukraine, in which NATO plays a key role.

Following the conclusion of King Felipe’s speech, he and Queen Letizia left the Throne Room to head into a small antechamber for the private part of the reception.

It is a tradition that not even the pandemic managed to break: the reception of the Diplomatic Corps is one of the highlights of any year, with countries hosting it both at the beginning or a the end of any given solar year.

In most countries, the Apostolic Nuncio (aka the Ambassador from Vatican City State) is considered the Dean of the Diplomatic Corps, regardless of the religion in the hosting country, whereas all other Ambassadors and diplomats occupy a place that corresponds to the time they spent in the role; the further back they presented their Letters of Credential, the more prominent a place they will hold in such receptions.