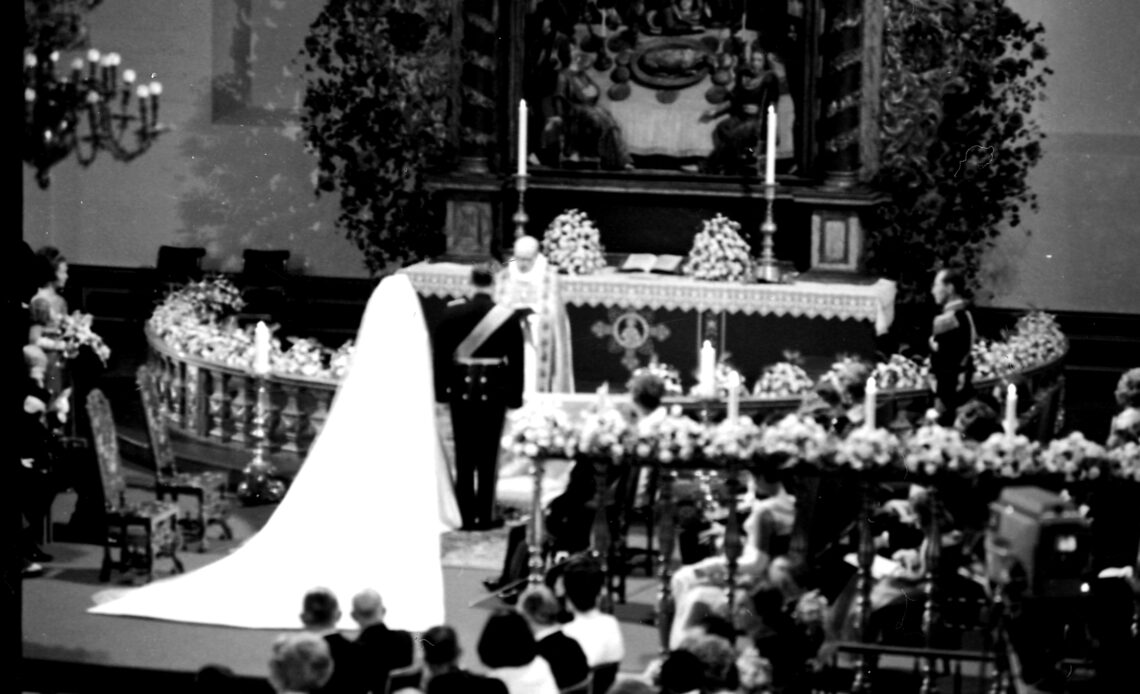 On 29 August 1968, Norway’s Crown Prince Harald wed the love of his life, Sonja Haraldsen, at long last. The pair had gained the approval of King Olav to wed after Harald vowed to never marry at all if he could not marry Sonja – a commoner.

The wedding took place in Oslo Cathedral with 850 people in attendance, including royals from across the world. Ilmi Riddervold served as Sonja’s maid of honour while Count Flemming of Rosenborg was Harald’s supporter. Ian Henriksen, Anita Henriksen, Ingeborg Lorentzen and Lis Haraldsen were bridesmaids.

Sonja wore a beautiful and very 1960s style silk wedding gown by Molstad. One thing was noticeably absent from her wedding ensemble; the future Queen of Norway elected to not wear a tiara on her special day. Harald wore the Norwegian Army’s black gala uniform.

Sonja’s father had died in 1959, and to show support for his new daughter-in-law, King Olav accompanied Sonja to the cathedral and escorted her down the aisle to marry his son.

The Norwegian Student Choir began the ceremony by singing “Our Lord God, Your Precious Name and Honour.” The congregation next sang “In Love, God Created Us” before the Bishop of Oslo, Fridtjov Birkeli, spoke and the couple recited their vows. Sonja curtsied to King Olav before she and Harald took their seats in the church. Bible readings, prayer and musical performances followed before the ceremony came to a conclusion.

Crown Prince Harald and the new Crown Princess Sonja exited the church to the waiting crowds and a 21-gun salute. The royal couple then rode through the streets of Oslo in a convertible to wave at the crowds who had come out to greet them.

The reception was held at the Royal Palace, where 225 guests were invited to a banquet and dance in the evening. Harald and Sonja also made an appearance on the balcony alongside King Olav and their bridesmaids ahead of the dinner, which included a speech by King Olav, and the dancing that followed.

Harald ascended to the throne upon the death of his father in January 1991.