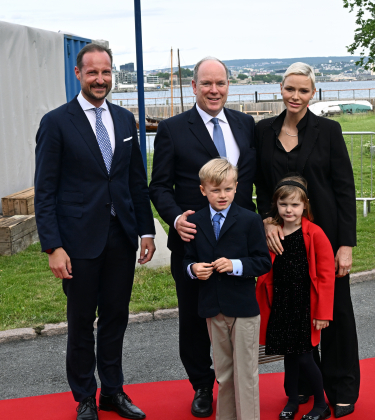 Prince Albert and Princess Charlene took their twins, Prince Jacques and Princess Gabriella, with them to Norway for official engagements.

The Prince and Princess of Monaco were in Norway to open the “Sailing the Sea of ​​Science” exhibit at the polar ship “Gjøa” in Oslo’s Framm Museum about Monaco’s Prince Albert I.

Prince Albert II opened the exhibit on his ancestor and had help cutting the official ribbon from his son. They were joined by the ancestors of some of those who joined Prince Albert I on his exploration of the Arctic and met with both Crown Prince Haakon and the Monaco royals.

Young Gabriella and Jacques were later seen enjoying the exhibition and learning about the exploration. Both received Lego sets of the polar ship “Fram” as gifts during the visit.

Geir Kløver, Director of Framm Museum, spoke of the importance of Prince Albert I’s expedition to Svalbard, “The expeditions to Svalbard were important in themselves, but can also be seen as birth support for the Norwegian scientific studies of Svalbard. When the Norwegian government did not provide funds for the exploration of Svalbard, Prince Albert I included a department with Norwegian researchers under the leadership of Gunnar Isachsen, known for his participation in the Andre Fram voyage. Hanna Resvoll-Holmsen, one of Norway’s first female researchers in the polar regions, participated in these expeditions.”

Albert I was joined by Norwegians on his expeditions to Svalbard from 1898–1907, and their participation with the Prince of Monaco helped lead to an annual expedition at Svalbard and was a contributing factor in Svalbard becoming part of Norway through the Svalbard Treaty. The area now hosts the Norwegian Polar Institute.

The Princely Family was joined by Crown Prince Haakon of Norway for the event.

They later travelled to the Royal Palace in Oslo for a private lunch hosted by King Harald and Queen Sonja. Crown Prince Haakon, Crown Princess Mette-Marit and Princess Märtha Louise were also in attendance.

The Princely Family’s visit continues in Norway this week, and they will visit some of the areas where Prince Albert I explored later in the week.