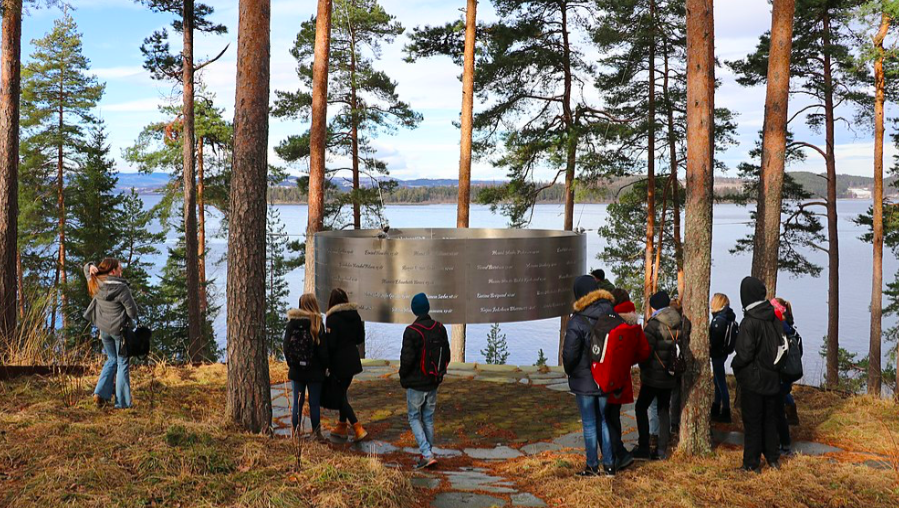 A place of memorial on Utøya (Photo Credit: Human-Etisk Forbund via Wikimedia Commons)

July will mark ten years since the terrorist attacks in the government quarter in Oslo and on the island of Utøya in which 77 people lost their lives. The Norwegian Royal Family wishes to follow up with some of those they met ten years ago, as well as others who in various ways were directly affected by the attack.

In addition to participating in the official commemorations on July 22, The Royal Family will throughout 2021 invite survivors, relatives, members of the emergency services and volunteers to meetings and audiences. At these events, the royals will discuss the events since 22 July 2011 both for individuals and for Norwegian society as a whole.

The ten-year commemoration of the attacks provides an opportunity to reflect on topics such as what we have learned, how we take the lessons with us further, and how we make sure to convey important knowledge about the terrorist attacks to new generations.

On July 22 2011, a car bomb detonated near government buildings in Oslo. The second attack was a mass shooting at a summer youth camp on an Utøya island northwest of Oslo.

Of the 77 people killed, 55 were teenagers, with another 96 people being injured.

The bomb explosion occurred near the office of Prime Minister Jens Stoltenberg, killing eight people. Around 90 minutes later, at a youth camp organised by the Norwegian Labour Party on Utøya, a gunman disguised as a police officer opened fire at the campers, killing 69 people.

Earlier this spring, the Crown Prince and Crown Princess had meetings with leader Lisbeth Røyneland and deputy leader Tor Inge Kristoffersen in the National Support Group after 22 July and with Workers’ Youth League`s leader Astrid Hoem and former general secretary of Wokers’ Youth League Tonje Brenna. Next week, Their Majesties the King and Queen will meet two survivors from July 22 and two of the lifeguards in an audiences at the Palace.