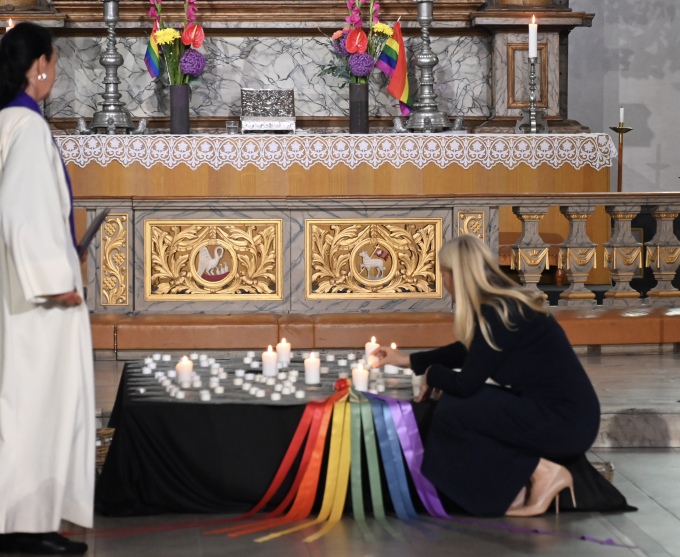 Crown Princess Mette-Marit of Norway has attended a memorial service for victims of the Oslo shooting.

The memorial service was held at Oslo Cathedral for the victims of the shooting in and around the London Pub and a popular LGBTQ club in Oslo in the early morning hours of Saturday, 25 June.

Edvard Grieg’s “Mourning March” began the service led by the President of the Church of Norway, Olav Fykse Tveit, and the Oslo Cathedral Choir sang the hymn “Someone must wake up in the night of the world.”

Tveit read from 1 Corinthians and said: “Bullets can not take the life of love. They can do serious damage and kill people. We have seen it before, and we have seen it again now. But love never ends. And now it is our task to show that it is true.”

President of the Storting Masud Gharahkhani, Prime Minister Jonas Gahr Støre and the leader of Association FRI Inge Alexander Gjestvang all spoke during the service, which also included the lighting of candles in memory of the victims. Crown Princess Mette-Marit was one of the attendees who lit a candle in honour of all those impacted by the shooting.

Crown Prince Haakon was due to attend the service, but he was diagnosed with COVID-19 and unable to participate.

King Harald expressed his horror at the shooting on Saturday morning, and the Crown Prince Couple and Prince Sverre Magnus laid flowers at a makeshift memorial later in the day.

Two people have been killed and 21 injured after a person began shooting on Saturday morning. The incident is being treated as a terror attack, and a 42-year-old man has been arrested in connection with the attack.

The Oslo Pride Parade was due to take place on 25 June, but on police advice, the parade was cancelled out of fear of copycat attacks.