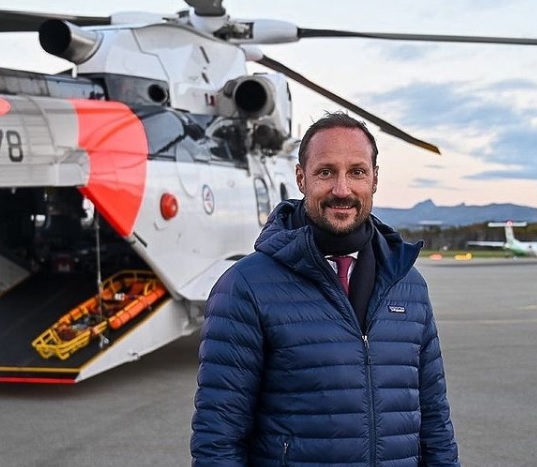 Crown Prince Haakon has helped mark the Norwegian Rescue Centre’s 50th anniversary in the northern Norwegian city of Bodø. The celebration of the 50th anniversary should have taken place last year, but was postponed due to the pandemic. The Crown Prince emphasized how cooperation helps save lives and praised the state system that is based on cooperation between public agencies, organizations and private actors.

During the visit, His Royal Highness said: “For over 50 years, you have experienced that collaboration saves lives. Having a state system based on cooperation between various public agencies, organizations and private actors means that you can effectively mobilize in a matter of minutes. This highlights some of the finest things in our culture and in the structure of our society. In addition, it is this coordinated effort we celebrate today, when we mark the main rescue centre’s 50th anniversary”.

The main rescue centre leads and coordinates all types of search and rescue operations at sea, on land and in the air. This is done either directly from the main office in Northern Norway or from the office in Southern Norway, or through assignments to subordinate local rescue centres. The Crown Prince himself got to see how the various actors interact in the air, at sea or on land through a large emergency demonstration in Bodø’s harbour basin.

Crown Prince Haakon said during the visit: “All these national tragedies are part of the history of the rescue service. For the coordinated effort has been mobilized every time something dramatic has happened on land, in the air and increasingly also internationally. I hope that the rescue service will remain strong, united and on guard in the years to come. Thank you for the efforts you make for all of us. Thank you for being our common national security for 51 years”.

Crown Prince Haakon also visited the operating room of the Main Rescue Centre where he was told what happens when the alarm goes off. Later the same day, September 20th 2021, Crown Prince Haakon received a briefing on Norway’s new rescue helicopters, which are now being phased into service. The first Norwegian SAR Queen helicopter was first taken into use by the 330 Squadron last autumn. The new rescue helicopters will replace the old Sea King type.