Grace’s children: Who is Princess Stéphanie of Monaco? 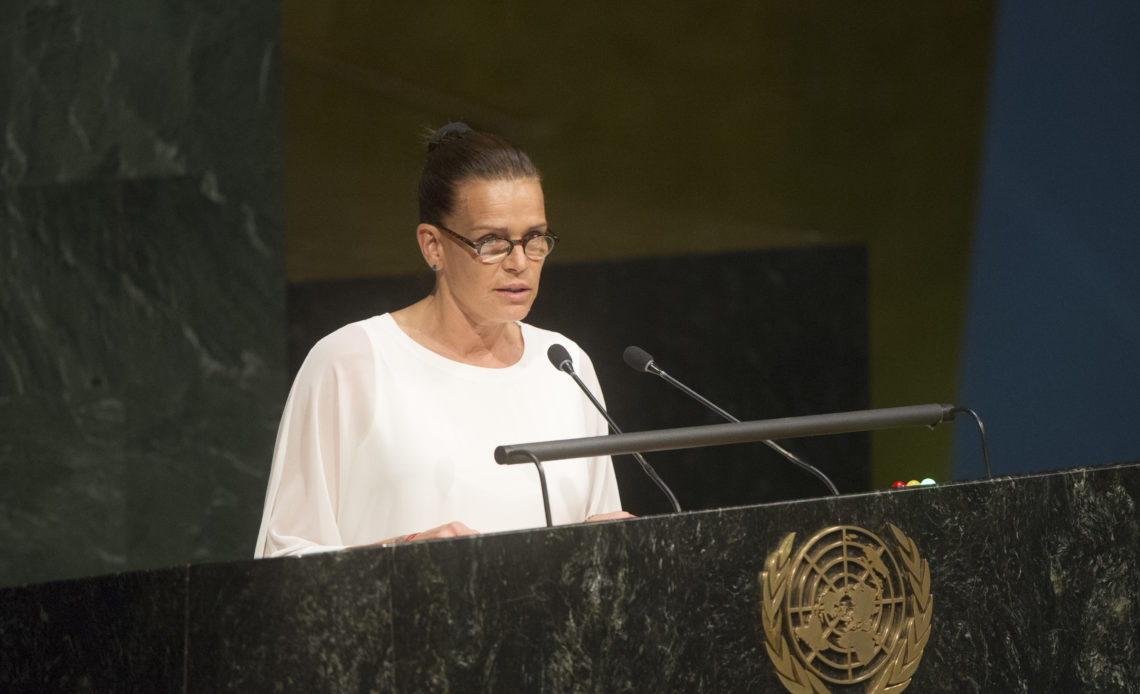 Princess Stéphanie Marie Elisabeth was born in the Princes Palace in Monte Carlo, the capital of the small sun-kissed principality of Monaco, on 1 February 1965. The youngest child of Their Serene Highnesses, Rainier III, Prince of Monaco and Grace, Princess of Monaco, she was third in the line of succession to the Monegasque throne at the time of her birth, following her older brother, Prince Albert, born on 14 March 1958 and her older sister, Princess Caroline, born on 23 January 1957.

Stéphanie was named for her great-great-great-great grandmother, Stéphanie de Beauharnais, Grand Duchess of Baden, a first cousin once removed by marriage to Napoléon Bonaparte. The young Princess was baptised in Monaco, her godparents being her maternal uncle John B. Kelly Jr and her paternal first cousin, Baroness Elisabeth-Anne de Messy.

It was due to her status as a legitimate descendant of the Dukes of Polignac through her paternal family that Princess Stéphanie bears the title Countess of Polignac, a title she has carried from birth. She is, therefore, a member of the historical French nobility. Through her mother, the former Hollywood actress Grace Kelly, she is of Irish and German descent. Before the birth of the Monégasque Princely Couple’s first child in 1957, the United States consul in Nice, France, requested that the U.S. State Department make a ruling on the citizenship status of the future children of the couple. It was reported that the consul was told that the children would be dual citizens of both the United States and Monaco from their birth.

In her youth, Princess Stéphanie pursued lessons in classical dance and studied piano. During her school years in Paris in the 1970s, the Princess also took an interest in gymnastics, successfully participating in the sport between 1974 and 1979.  She also competed in horse riding during this period. To this day Princess Stéphanie still engages in activities such as swimming, water skiing and downhill skiing.

In an interview with People Magazine in April 1982, shortly before her death, Princess Grace described Princesses Stéphanie and her sister Caroline as “warm, bright, amusing, intelligent and capable girls. They’re very much in tune with their era. Besides being good students, they are good athletes – excellent skiers and swimmers. Both can cook and sew and play the piano and ride a horse. But, above all, my children are good sports, conscious of their position and considerate of others. They are sympathetic to the problems and concerns in the world today.” Grace also fondly called Stéphanie her “enfant terrible” (wild child).

Princess Stéphanie began her schooling at the Catholic Dames de Saint-Maur school in Monaco, before continuing her studies at the Dupanloup in Paris where she passed the French General Certificate of Education (baccalauréat) in 1982. The Princess is fluent in French, English, Monégasque and Italian. In 1978 and 1979, Stéphanie became the patron of the Grand Prix de Gymnastique de la Ville de Paris as a result of her previously mentioned interest and participation in the sport during this time.

It was in the autumn of 1982, on 13 September that Princess Stéphanie’s life changed. Whilst driving back to Monte Carlo from their house in Rocagel, France, Stéphanie and her mother, Princess Grace were in a serious car accident, which claimed the life of Grace the following day and almost the life of Stéphanie. The official story was that Princess Grace had suffered a stroke behind the wheel of the car, forcing the vehicle off the mountainous road and down a steep incline. However, rumours continue to dog Princess Stéphanie to this day claiming that it was she who was driving at the time of the accident, a rumour the Princess denied in a rare interview on the accident in 1989. Stéphanie fractured a vertebra in her neck and, as a result of the extent of her injuries, she was unable to attend the funeral of her mother.

In the period following her physical recovery from the horrific accident, Princess Stéphanie interned at the fashion house Christian Dior beneath the direction of head designer Marc Bohan from 1983 to 1984. She later went on to produce her own range of swimwear between 1985 and 1987, named ‘Pool Position’ as well as her self-titled fragrance in 1989. The Princess’s skills were not only limited to the fashion world, however. In February 1986, she released a French-language single entitled ‘Ouragan’ (Hurricane) as well as an English edition, entitled ‘Irresistible’. Both versions of the single were international successes, with both rumoured to have sold over two million copies. ‘Ouragan’ remains one of the best-selling singles in France of all time.

It was following this initial success that Stéphanie moved to Los Angeles, hoping to break the American music industry. However, despite a segment on the Oprah Winfrey Show and a heavy promotional tour, Stéphanie’s self-titled album was not successful. It was following this disappointment that the Princess decided to quit the music scene, however not before taking part in the music video of Michael Jackson’s “In the Closet”. The song was an instant success, reaching the US top 10, however Princess Stéphanie’s was simply credited as the “Mystery Girl”, and thus, it wasn’t until a few years later that her involvement in the record was revealed.

On the 10th November 2005, Princess Stéphanie was awarded the insignia of the Grand Cross of the Order of Grimaldi by her brother Prince Albert II of Monaco, for her involvement in humanitarian actions, notably in the fight against HIV/AIDS. The Princess’s support of the artistic sector of Monegasque society was also underlined as one of the reasons behind her receiving of the award, especially her involvement in and support of circus arts through the Monte-Carlo International Circus Festival, created by her late father, Prince Rainier III.

In her role as the creator of ‘Fight AIDs Monaco’, Princess Stephanie travelled on 2 June 2006 to the United Nations in New York in which she delivered a speech during a summit on HIV/AIDs explaining the contribution of Monaco and to declare her personal involvement in the fight against the catastrophic disease. On the 6th of October that same year, Princess Stéphanie was named as a Special Representative for UNAIDS. She is today a Goodwill Ambassador for this institution.

On the 26th June 2010, Princess Stéphanie inaugurated, in the presence of her brother, the ‘Maison de Vie’ (House of Life) in Vaucluse, France. Inspired by her 2006 visit to the United Nations in New York, this ambitious project aims to enable sufferers of HIV/AIDs to rest, take a break from the difficulties of daily life and to give them some time to restart their lives. The ‘Maison de Vie’ is financed by ‘Fight Aids Monaco’.

Like her siblings, Princess Stéphanie’s personal life has always been of great interest to the international media. Initially being linked romantically to celebrities such as Paul Belmondo, Anthony Delon and Rob Lowe, Stéphanie began a relationship with her bodyguard Daniel Ducruet in 1992. The couple had two children: Louis Robert Paul Ducruet born 26 November 1992 and Pauline Grace Magui Ducruet born on 4 May 1994. Despite initially being excluded from the Monégasque line of succession as a result of their illegitimate status, the two children of Princess Stéphanie were included following her marriage to Daniel Ducruet on 1 July 1995. The couple later divorced on 4 October 1996.

On 15 July 1998, Princess Stéphanie gave birth to a third child, a daughter Camille Marie Kelly Gottlieb. Despite not identifying the father of Camille on her birth certificate, he is believed to be Jean Raymond Gottlieb. Due to the fact her parents never married, Camille Gottlieb is not in the line of succession to the Monégasque throne. In 2001, the Princess began a relationship with a married elephant trainer, Franco Knie. The couple and Stéphanie’s three children from her previous relationships moved into Knie’s circus caravan that year. However, the relationship only lasted until 2002. On 12 September 2003, Princess Stéphanie married a second time, this time to Adans Lopez Perez, a member of Knie’s circus ensemble; however, the marriage ended in divorce on 24 November 2004.

Princess Stéphanie and her children currently live at Villa Clos Saint-Martin in Monaco.