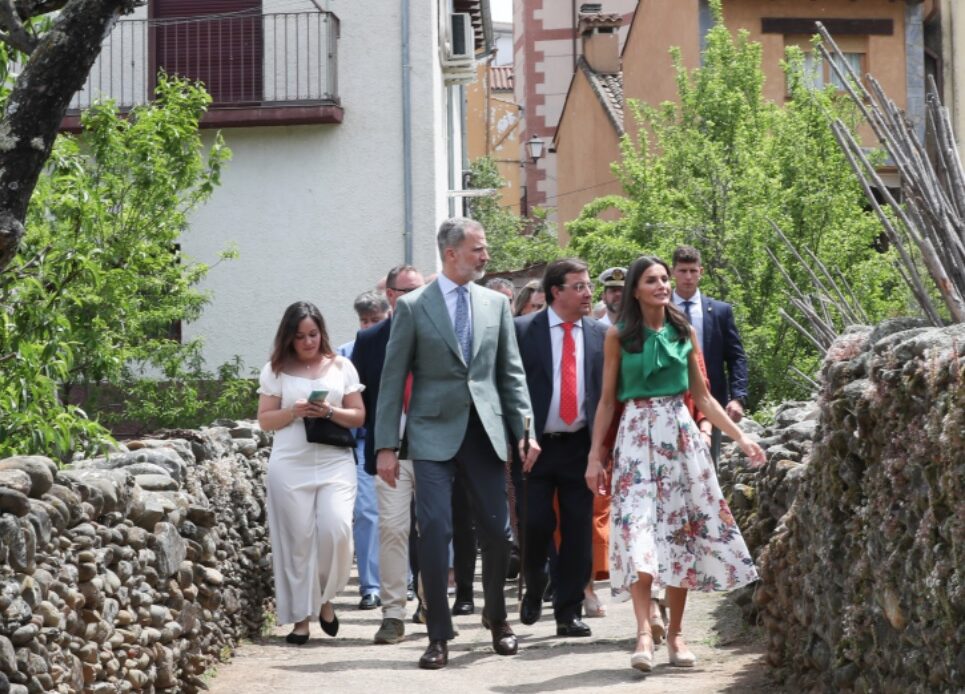 King Felipe and Queen Letizia of Spain travelled to Pinofraqueado, in the Las Hurdes, to commemorate the centenary of King Alfonso XIII’s visit to the territory.

Queen Letizia joined her husband, who was already in the area, and were accompanied by the President of the Extremadura Parliament and the Minister of Territorial Policy. They received the welcome from local authorities and the Mayors of municipalities included in Las Hurdes.

Before entering the Pinofranqueado’s municipality building, Their Majesties watched a Paleo performance by students of the Tamborilero School and the Folkloric Group in the square in front of the palace. Paleo is Las Hurdes’ traditional dance.

Once inside, the King and Queen were welcomed by members of the municipal council and held a short meeting with all the Mayors of municipalities within the comarca. The King and Queen then signed the book of honour, before receiving a tour, which included the reproduction of a typical street, of the Las Hurdes Documentation Centre by its director and unveiling a plaque marking their visit.

It was then time to work with one of Queen Letizia’s biggest passions, as the Royal couple met director and producer José María Fernández De Vega, most famous for his 2018 animation movie “Buñuel en el laberinto de las tortugas” (“Buñuel in the labyrinth of the turtles”), based on the story of director Luis Buñuel, who found his fortune again with a documentary on Las Hurdes.

Their Majesties then watched a video about King Alfonso XIII’s first visit to the area, before touring an exhibition about the comarca’s two touristic festivities: Carnaval hurdano and Enramá.

King Felipe and Queen Letizia concluded their visit to Las Hurdes with a meeting with the local population, which greeted them with cheers, and a walk on the local river bank.

This marks the 6th visit to the comarca from a member of the Spanish Royal family. In particular, it was the first by King Alfonso XIII in 1922 that generated a lot of publicity, highlighting the poverty experienced by many in the area and leading to a push for more resources to be devoted to bettering the condition in the area.