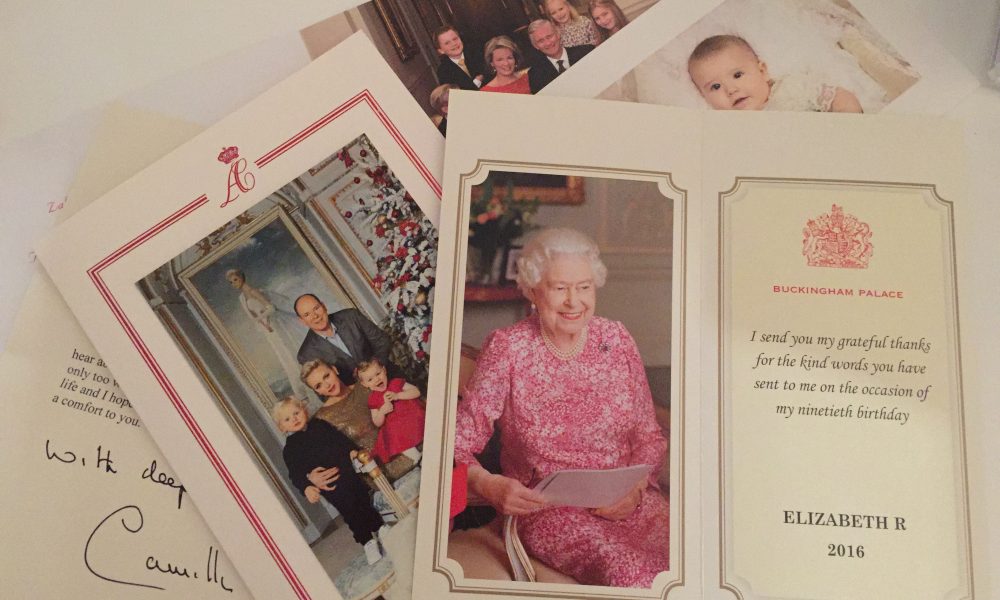 Royals from across the world receive countless numbers of letters each year. Many have thought about writing to a specific royal, but they are not sure how to go about it. Royal Central has investigated to help our readers if they want to send a letter to any of the royals across the world.

Over the past year, I have sent letters to different royals from varying royal families to see if there would be a response, the type of response, and the waiting time for a reply. I’ve also spoken with others, like Keri from Letters Royale on Instagram, who have sent letters and cards to the various royal families to hear their experiences to share with you. She also has a blog that shows her responses and provides the addresses of the royals for each royal family.

If you send a letter or card in celebration of a birthday, anniversary, or special event you receive a photograph/card in return to thank you for your message.

The response from the Duchess of Cornwall came from Camilla herself. The Duchess is known to read all the letters sent to her and personally respond.

The letter sent to Her Majesty was sent for her 90th birthday, and due to the over-abundance of letters and cards she received, it took some time for her team to reply to everyone. The response from Her Majesty came on Christmas Eve after I had sent it in May.

A letter was sent to Crown Princess Mary in January 2016, and by March there was a response from the Chief of the Court. Most responses from Denmark are quite short (2-3 sentences). It took around two months to receive a reply for me. They seem to be the only royal family to send their letters and cards economy mail.

A letter was mailed to Crown Princess Victoria on the occasion of Prince Oscar’s christening and her birthday in July, but a reply has yet to be received. Speaking with others who have sent letters to the Swedish Royal Family have told me that the chance of receiving a response has been about 50/50.

One person did receive a thank you card for the good wishes they sent to His Majesty King Carl XVI Gustaf for his 70th birthday in April 2016.

However, I sent a congratulating letter to Prince Carl Philip and Princess Sofia of Sweden on the occasion of Prince Alexander’s christening in September. I received a lovely thank you card in the mail in mid-November. The Prince Couple usually has replies sent on their behalf for the mail they receive whether it be for their wedding, birthdays, anniversaries, or special events.

One letter was sent to Her Majesty Queen Letizia in September. Others have sent Christmas cards over the past few years. Most have received a Christmas reply. From those who have received a reply from the holiday, the owner of the WonderfullyRoyal blog said, “I’m a huge fan of the Spanish and Monégasque Christmas cards. They’re always very high quality.”

Princess Tessy recently posted a photo on her Instagram account of the many letters and cards they received for their family. She promised that each one would get a response saying, “I will make sure I will answer each one of these letters with much love.”

The Grand Ducal Family are known for sending out Christmas replies; however, due to a significant amount of mail they receive around the holidays, it can take a few months to receive an answer in the mail.

Replies are also sent for major events like the birth of a child, anniversaries, and weddings, which get a reply, as well. The Hereditary Grand Duke has been known to personally respond to some of the letters he receives.

From those who sent Christmas cards in December, most received their reply by the end of the month. Our Europe Correspondent, Laura Dekkers sent hers on 6 December and received her reply the day after Christmas. Laura is from Belgium, so it comes as no surprise that she received a response so quickly. I sent a card on the same day from Tennessee, and I received their Christmas reply on 30 December.

She also received a reply from Prince Amedeo of Belgium and his wife, Elisabetta after she sent a congratulatory letter on the occasion of the birth of their first child – a daughter Anna Astrid (b. 17 May 2016). The thank you included a photo of their newborn daughter, as well.

Those sending Christmas cards and birthday wishes for the Dutch Royal Family usually receive a response. It is generally just a simple card with a simple but kind thank you message on one side. For responses to general letters sent to the family, the shortest wait time averages to about one month or slightly longer.

A Christmas card was sent to Their Serene Highnesses The Prince and Princess of Monaco in early December. A Christmas card from Their Serene Highnesses arrived around just 20 days after I had sent mine to Monaco. It’s a lovely response, and exactly as shown on their official Facebook a few days before Christmas. The photo is glued to the card and not just printed on as some have done in the past.

Letters to send to Their Serene Highnesses regarding anniversaries and birthdays almost always get a kind response back thanking them for their kind words and warm wishes written in both English and French.

From speaking with those who have sent letters to the Norwegian Royal Family, it seems replies are few and far between for those outside of the Scandinavian country. So, if you get a response to your letter, you are quite lucky!

I also noticed that for those who sent a Christmas card in 2016, the Royal Court of Norway posted this message on 11 January on their website thanking everyone for their seasonal greetings: “Many Christmas and New Year’s greetings were received at the Royal Palace and they were greatly appreciated.

“Their Majesties the King and Queen and Their Royal Highnesses The Crown Prince and Crown Princess would like to thank everyone for all the enjoyable cards and letters.”

I asked Keri if she had any advice for our readers who are thinking about writing to some of the royals. She had this to say, “My advice would be to remember that they’re not friends you’re writing to even though we often feel like we know them. So you should keep that in mind when writing.

“Also, be patient. It can sometimes take months until you hear something and don’t be too disappointed if you don’t hear anything back. There’s always a chance to try again, and you never know what happened or the reason behind a missing reply.”

Have you sent a letter or card to a royal? What was your experience? Let us know in the comments below!